When Charlie Baker ran for governor in 2014, he campaigned on the tragic stories of vulnerable kids who fell through the cracks of an overwhelmed bureaucracy. He called the state Department of Children and Families a “broken agency” and pledged to fix it.

Baker’s now in his second term, and this agency still needs fixing, especially when it comes to delivering services for at-risk children in foster care. Like the vexing problems of the MBTA and State Police, Baker can point to some improvements — what some might call tinkering — but he’s far from achieving systemic reforms.

Reporting by the Globe’s Kay Lazar shows that kids under state care bounce from one temporary foster care home to another and often wait months for mental health services. In a state touted as a technology hub, DCF still relies partly on an old-school, paper-based system to match children with available foster homes. And in a world of instant text messaging, foster parents say this agency is a poor communicator, leaving them without crucial information about the children they take in as well as other support measures. This week the state will start testing an Internet portal designed to improve communications. While that’s welcome, and long overdue, it’s small-bore given the magnitude of the problems faced by children in the system.

Health and Human Services Secretary Marylou Sudders insists the Baker administration is committed to rebuilding an agency that was “hampered by budget cuts, low morale, and high-profile tragedies.” Overall, she said, the agency’s budget has increased by $180 million since Baker first took office. Today, there are also more social workers and virtually all are licensed.

According to Sudders, the caseload for social workers dealing with children who remain with their biological families is around 18 to 1 — a historic low for Massachusetts. 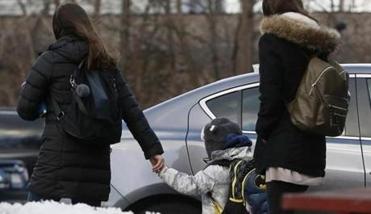 In state’s broken foster system, some kids can’t find a bed for the night

Almost every night, social workers, with kids in their back seats, are crisscrossing Mass. or camping out at a 24-hour McDonald’s as they await word of a foster family with space for another child.

But on the foster care side, the caseload picture is grimmer. Peter MacKinnon, president of SEIU Local 509, which represents 4,000 social workers, said the number of kids in foster care has increased 20 percent since 2014. In the hardest-hit offices, MacKinnon said, social workers who deal directly with foster parents are now seeing caseloads of 30 or more families. “There are even reports of caseloads in the high 30s, but the agency’s reporting of these numbers remains murky,” said MacKinnon.

It’s easy to call for the hiring of more social workers in the regions where foster care caseloads are highest, and for the recruitment of more foster families. In the short term, that may be necessary. Still, it’s not a long-term solution.

Shouldn’t the goal be creating a system in which fewer kids need the foster care system in the first place? “Foster care is supposed to be the last resort,” said Susan Elsen, a child welfare advocate at the Massachusetts Law Reform Institute, a poverty law and policy center. “Child welfare means first trying to keep the child safely at home. The way to get foster care right is to get child welfare right.”

There’s a split in the child-welfare world about how quickly to remove children from a troubled home, which is an inherently subjective decision. Every news story about a child left to suffer with a dangerous parent, or a family torn apart by a child’s unjust removal, swings the policy pendulum one way or another. Still, keeping children in a home that’s safe is always preferable, and stabilizing homes should be a higher priority.

The steep increase in out-of-home placements is due partly to increased vigilance at DCF, the impact of the opioid crisis on families and children, and the fact that funding for family stabilization and support services has not kept pace with need. As of December 2018, 87 percent of the children in DCF’s caseload remained at home or were in foster care with a goal of returning home.

Yet the most recent House Ways and Means budget proposal allocates less than 9 percent of DCF’s total services budget to the family stabilization and support services these children are supposed to be receiving.

Elections come and go. The children in the state’s care should be more than campaign talking points. Truly fixing this agency — as promised — requires relentless focus, energy, urgency, and commitment to systemic change.