Here’s a crazy idea: If people in Boston, Cambridge, and nearby cities and towns want better public transit, we might just have to pay for it ourselves — through actual taxes, year in and year out.

This past week, the Globe reported that Boston Properties, which wants to build 1 million square feet of residential and commercial space near Cambridge’s Kendall Square, would set aside $6 million for transit fixes in the booming area. Sure, the money will come in handy. Kendall’s economy depends on an ancient MBTA network that’s jam-packed at rush hour, and there’s an urgent need to move more people in and out. The infusion of money could pay for extra buses, subsidized shuttles, or various other stopgap measures.

It’s a nice treat. What it isn’t is a model for how the T should generate revenue in the future.

A good transit network needs a predictable stream of money for operations and continuing improvements. In the last few years, MBTA riders have dutifully kicked in extra to keep the system running, but transit operations are seldom self-sustaining, as the demise of the private bus startup Bridj recently showed. Penny-pinching by the Baker administration has cut the T’s operating losses, but also created pressure to cut services that transit systems in Boston’s competitor regions routinely offer.

The Boston Properties announcement continues an emerging pattern, in which we cobble together money to build out our transit network one ad-hoc deal at a time. The imperiled Green Line extension project survived not least because the cities of Cambridge and Somerville gave $75 million to help pay for it. New Balance paid for a new commuter rail stop at the sneaker company’s new headquarters complex in Brighton. 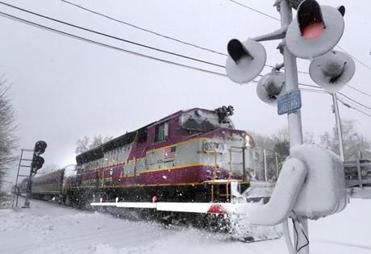 In the thrill-a-minute world of public infrastructure finance, the hottest trend is “value capture” — that is, collecting money for new transportation projects from of the people who’ll benefit most from their completion. Had the T and the City of Boston aggressively pursued such a strategy in the Seaport years ago, the fast-growing area might have better transit, and its traffic woes today wouldn’t be so dire.

Still, the owners of new buildings aren’t the only ones enriched when a transit network can expand and improve to meet changing needs. If you own a home or office space within a short walk of an MBTA stop, your property values have already spiraled because of your proximity to the system. The most recent detailed research on the subject, a 2013 study by the Center for Neighborhood Technology, found that home prices near the T’s rapid-transit lines grew an astonishing 129 percent faster over five years than those in the Boston area as a whole.

Owners of such properties (and, for whatever it’s worth, I’m one) could do more to support the transit system than we currently do. A bill on Beacon Hill would allow the creation, via ballot initiative, of regional transportation districts with the power to collect property, sales, or other taxes from more than one city or town. A modest dedicated property tax for core MBTA communities — maybe a hundred bucks a year for the average homeowner, let’s say — would generate more money to upgrade the system from a broader swath of people who benefit from it financially. A smaller tax for towns served by commuter rail only would also help.

Politically, the T is both blessed and cursed by the large scope of its operations. The agency’s service area, including its commuter rail watershed, includes most of the state’s population. Not coincidentally, the costs of operating and maintaining the network are far bigger than even the T’s largest municipality, Boston, could or should ever handle on its own. That’s why statewide taxes help subsidize the agency, and why transit advocates have looked to Beacon Hill for more help in hard times.

Yet those same taxes fuel resentment in parts of the state that receive no direct benefit from the T. By law, contributions from the T’s member cities and towns can grow by no more than 2.5 percent a year, and local officials aren’t clamoring to kick in more. Across the country, though, citizens have been far less bashful. In November, voters in Los Angeles County, the city of Atlanta, and three Seattle-area counties all decided to tax themselves for better transit.

In the Boston area, where we’ve all but abolished counties, we act as if new money for transit improvements can only come from the state or from Washington. Whether President Trump comes out with a $1 trillion infrastructure plan or not, federal transit policy is likely to help those who help themselves. Voters can make mature decisions about whether better mobility is worth the extra money — that is, if they’re ever asked.