You know those instances when a public official says something so patently ridiculous that you can almost hear his or her reputation shatter? Those times when an answer is so preposterous that it strips away any vestige of high-mindedness?

Let’s call them Barr Scars. After all, on Wednesday, Attorney General William Barr’s performance before the Senate Judiciary Committee left his credibility in tatters.

It wasn’t just one such moment. It was a succession of instances that went leagues beyond the line that separates legalistic hair-splitting from obvious dishonesty.

Perhaps the most ridiculous moment came when Senator Sheldon Whitehouse of Rhode Island queried Barr about his previous comment that he thought “spying did occur” on the Trump campaign. Spying, of course, is a very strange word to employ to describe an FBI investigatory effort. Barr’s use of that term lent credence to the conservative conspiracy theory that a Deep State cabal was out to sink Trump’s 2016 presidential campaign.

Barr, however, maintained he hadn’t used the term in a negative way. 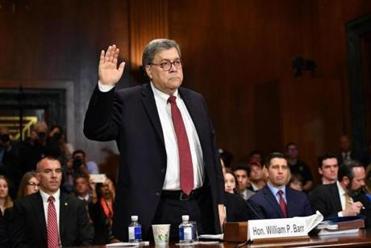 Forget the reasonable-person standard. That doesn’t even pass the laugh test.

Mind you, it wasn’t even Barr’s most risible reply. That came when he was queried regarding his April 9 answer to US Representative Charlie Crist of Florida about press reports that “members of the special counsel’s team are frustrated” about the way the AG had, in his four-page March 24 letter, portrayed their report.

“Do you know what they’re referencing with that?” Crist asked during an April 9 House hearing.

It now turns out that Special Counsel Robert Mueller wrote Barr just days after Barr released his letter, saying it “did not fully capture the context, nature, and substance” of the special counsel’s findings. And that Barr and Mueller had a subsequent telephone conversation about the special counsel’s concerns. When, in light of that letter, Vermont Senator Patrick Leahy pressed him about his answer to Crist, Barr explained it this way: “I answered a question, and the question was relating to unidentified members who were expressing frustration over the accuracy relating to findings. I don’t know what that refers to at all. I talked directly to Bob Mueller, not members of his team.”

What, really, can you say about that response?

On Wednesday, Barr said he didn’t release the executive summaries of the two volumes of Mueller’s report, as the special counsel requested, because summaries can oversimplify. But what of his own letter, which put a pro-Trump spin on findings that actually told a more damning story?

That letter, he told the Judiciary Committee, wasn’t meant to be a summary. No indeed. As is now apparent, it was obviously intended to be a whitewash.