Once upon a time Bill Clinton wore sunglasses, played the sax on TV, and seduced America with his lip-biting, aw-shucks Arkansas drawl, “I feel your pain.” Once upon a time Hillary Rodham upended a nation’s first lady expectations: Who was this super-achieving, policy wonk lawyer in headband and bangs?

Bill had charm. Hillary had ideas. Much of the country had hope, even as we were swept up into endless Clinton marital dramas. How many “bimbo eruptions,” as some of us called them, could First Feminist Hillary endure?

Fast forward to Tuesday night at the Boston Opera House, the latest stop on the Clintons’ North American speaking tour, and the 1990s seemed a million years ago. For me it was like the first time you look at your parents and realize they’ve grown old. Particularly Bill, whose powerhouse convention speech, just in 2012, helped ensure Barack Obama’s reelection.

On Tuesday night, with actor Tony Goldwyn interviewing the couple, former president Bill Clinton’s voice sounded weak and raspy. His collar looked loose. Hillary’s aloof delivery underscored, again, the political talent gap — the size of the Grand Canyon — between her and her husband when he was president. It was all disheartening, even sad.

“We’re still here chugging along,” Bill said when asked about his 44-year-marriage that, dramas notwithstanding, survived. “We weathered all kinds of challenges,” said Hillary, “many of which are known to you.” Then Bill again: “I try to loosen her up. She tries to tighten me up.” 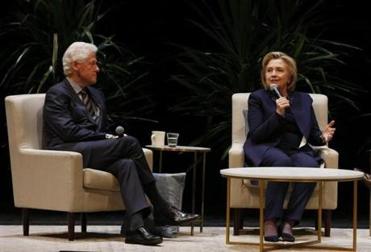 Clintons talk marriage, Mueller, and a little politics at the Opera House

The former president and the 2016 Democratic presidential nominee spoke for 80 minutes about their past life in politics and even delved into their personal life.

Other presidents have moved discreetly, gracefully, even gratefully, into their post White house years. George Bush, George H. W. Bush, Jimmy Carter. Clearly former president Clinton and his almost president wife Hillary, also a former US senator and former US secretary of state, have not, and I was left wondering Tuesday: What’s the point of all these performances? It can’t just be about money, can it? Or a bottomless need for the ovation they received — everybody standing — when they took to the stage a half-hour late? Meantime, a big screen ran photos of the couple at Yale Law School, cuddling in a hammock, at various political conventions and bill signings and inaugurations, with their daughter Chelsea, and their two grandchildren.

Bill Clinton led the audience on a nostalgic, best-shine-on-it tour through his presidency’s long-ago foreign involvements in Bosnia, Yemen, Israel, and Palestine. Hillary Clinton recalled the first hopeful moments of the Arab Spring, when she was Obama’s secretary of state.

It was oddly backward looking. The name “Trump” was never mentioned. There were no insights on the 2016 race or strategic advice for nervous Democrats heading into 2020. There was no solace offered to long-time loyalists now fearing an America sliding toward the abyss. The only personal revelations outside the marriage: how much they enjoy the grandkids. The only newsy subjects: internal bickering at the NRA, gun laws, and a breaking report about Robert Mueller complaining that Attorney General William Barr inaccurately spun the Russia probe.

All this did not seem to bother fans who nearly filled all but the priciest seats — $375 a ticket — in the Opera House, with a capacity of 2,677. Several told me they hope Hillary will run yet again. Sarabeth Guptill, 51, of Framingham, showed up with a six-inch Hillary Clinton action figure, dressed in a blue pantsuit, which she purchased online for $19.95. And no one, despite the #MeToo movement, expressed outrage at Bill Clinton save a handful of protesters repeating, “Go see Bill the Rapist” outside on Washington Street.

I guess I’d hoped for more from political legends with successes like no one before them. That, after a half-century on the make, they might finally drop the shtick, risk some honesty and authenticity, and give us some wisdom, reflecting on their own and other Democrats’ failings. Maybe an apology from him. Maybe from her an admission that she completely missed the roiling, countrywide despair that gave us Donald Trump. Instead, it was the Clintons, again, spinning the Clintons, again.