Marie Izquierdo should be the front-runner for the school superintendent job in Boston. The fact that she’s not, and seems likely to be passed over when the school committee makes it choice Wednesday night, says nothing about her strong qualifications — but a lot about the city and Mayor Marty Walsh.

Izquierdo, the chief academic officer for the Miami-Dade County Public Schools, has a track record tackling the most intractable problem in urban education: the achievement gap between white students and their black and Latino peers.

As the number two in one of the nation’s largest school districts, Izquierdo oversaw efforts to reduce significantly the number of low-performing schools. In 2014, 20 percent of schools there were graded as D, the second-worst rating. Last year, only 2 percent were rated D (there were no F-rated schools). The district has also seen the highest graduation rates under her tenure. On the strength of that record, she’s won support from Latinos for Education for the Boston job.

Mayor Walsh knows all that. In an interview with the Globe editorial board on Tuesday, he acknowledged Izquierdo’s Miami resume: “Marie is known best for closing achievement gaps and has some good, strong background on that,” he said.

She’s also bilingual, which would be a huge asset in a district in which Latinos are the biggest ethnic group and almost a third of students are English learners. Izquierdo herself was an English-language learner, who grew up speaking Spanish in Miami’s Little Havana neighborhood. 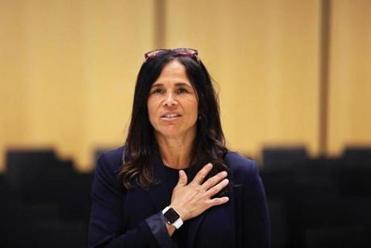 Educators, parents, and community activists are coalescing around one candidate: Brenda Cassellius, a former Minnesota commissioner of education.

But the mayor and his appointees on the school committee are moving in a play-it-safe direction. They are reportedly leaning toward former Minnesota commissioner of education Brenda Cassellius , who managed to ruffle fewer feathers in her interview with the committee last week. “Brenda is known for organizational skill,” was the highest praise Walsh could muster for Cassellius in his Globe interview. (The third candidate, Oscar Santos, president of Boston’s Cathedral 7-12 High School, appears to be out of the running.)

Walsh seems wowed by the support Cassellius has drawn from some parent and advocacy groups, including the NAACP. And he’s sensitive to the politics: The city’s last superintendent, Tommy Chang, was widely viewed as lacking political skills. Cassellius gave careful, noncommittal answers in her school committee interview last week — and that’s apparently a good thing. Izquierdo, in contrast, made the taboo — but accurate — observation that the school system had too many seats for its student body, which might require school closings.

Obviously, organizational skills are important, and there’s no reason to believe Cassellius would be a bad superintendent. She has plenty of experience, was mentored by former Boston superintendent Carol Johnson, and is well-regarded enough that she’s also in the running to be Michigan state superintendent.

But the mayor seems to be overreacting to Chang’s bumpy tenure by placing such a premium on political skills this time around. The school committee would be missing a big opportunity for students if it plays it safe.

Alan Wirzbicki is the Globe’s senior editorial writer. He can be reached at awirzbicki@globe.com.
Loading comments...
Most Popular in opinion
Real journalists. Real journalism. Subscribe to The Boston Globe today.