LAST NOVEMBER, REPUBLICANS lost 40 seats in the House of Representatives, nearly 300 seats in state legislatures, seven governorships, and suffered the worst defeat in the congressional popular vote since 1974.

Now the GOP has come up with a strategy to reverse these losses: change the rules. Five months after being trounced at the polls, Republican legislators across the country are not trying to convince voters to support them; rather, they’re passing legislation that will make it more difficult to unseat them.

In Tennessee, the Republican-controlled legislature will soon vote on a bill that would impose civil penalties for sending in incomplete registration forms, and criminal penalties for voter-drive organizations that fail to turn in voter registration forms within 10 days or have its volunteers attend mandatory training sessions. Tennessee already has one of the lowest voting participation rates in the country, so why make it more difficult to register new voters? In 2018, nearly 90,000 new black voters — who primarily vote Democratic — registered in the state. Even though Republicans won big in Tennessee last November, they aren’t taking any chances.

In Texas, where Democrats in 2018 picked up a dozen seats in the House, flipped two congressional seats, and almost won a Senate race for the first time in three decades, Republicans are following the same course. A bill recently approved by the State Senate would make it a felony to provide false information on a voter registration form. This means that a typo could, in effect, result in jail time. The legislation in Texas would even make it a crime to use a provisional ballot, which is typically done in situations when voters aren’t sure they are eligible to vote.

In Arizona, a bill is being considered that would make it more difficult for state residents to vote early. 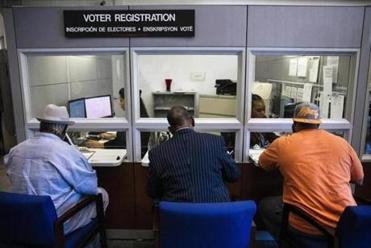 Republicans in Florida’s legislature are trying to sabotage the will of the people in the ugliest way possible: a modern-day poll tax.

Some Republican legislators are even undoing the will of their own citizens. Last November in Florida, voters overwhelmingly supported an amendment to the state constitution that would re-enfranchise convicted felons. Now Republicans in the state legislature are working on bills requiring convicted felons pay off their financial obligations to regain their right to vote. Critics have called this legislation the modern equivalent of a poll tax because it is aimed at restricting the right to vote for predominately minority black voters. (Nearly one in five potential black voters in Florida have lost their voting rights.)

Not to be outdone, the Trump administration this week argued before the Supreme Court in support of placing citizenship question on the 2020 Census. Lower courts have repeatedly rejected the plan, noting that it would result in an undercount because it will discourage minorities, particularly Hispanics, from participating. A mountain of evidence shows that the rationale used by Commerce Secretary Wilbur Ross for adding the citizenship question — to ensure better enforcement of the Voting Rights Act — is a lie.

If the Court rules in the Trump administration’s favor, it would reduce the number of electoral votes and overall congressional representation in cities and predominantly Democratic states, and provide a political boon to Republicans. Based on oral arguments, the court’s conservative majority appears likely to side with the government, continuing the Roberts’ Court pattern of issing rulings - particularly on voting rights issues - that align with the partisan objectives of Republicans.

The news on voting reform is not all bad. New York state passed legislation earlier this year to fix its antiquated voting system. Kansas’s new Democratic governor also signed legislation making it easier for state residents to vote. In the past several years, 15 states — including a handful of red states — have enacted automatic voter registration laws. The first legislation passed in the House under Democratic leadership expanded voting rights. Not surprisingly, the bill was immediately rejected by Senate Majority Leader Mitch McConnell, who in a Washington Post op-ed labeled it a “partisan power grab.”

Ironically, McConnell is not completely wrong here. Expanding voting rights is generally helpful to Democratic politicians. But it’s also good for the health of democracy. That one of the America’s two major parties so fears higher voter turnout that it has made creating higher and higher obstacles on voting a policy priority, would suggest American democracy is chronically ill.

McConnell understands all too well that Republicans can best hold on to political power through underhanded measures — whether via voter suppression, partisan gerrymandering, denying felons full voting rights, or brazenly undercounting the Census. If that wasn’t true, they wouldn’t be doing it.

For all the talk about the deleterious impact of the Trump presidency, the GOP’s war on voting may be the most significant and urgent threat to democracy — and it will likely live on, long after Trump has left the White House. Sadly, at this point, it’s the GOP’s most effective tool for winning elections.