It’s a new era in Maine, one that offers a hopeful note for the entire country.

After years of bullying, bigoted, blustery Republican Paul LePage, the Pine Tree State has returned to government in a civil, collegial tone with the inauguration of Democratic Governor Janet Mills.

Or as Mills put it in a purposeful and poetic inaugural address on Wednesday, “Streams, like the people of Maine, change direction on occasion to find the best way forward.” In a more direct comment, Maine’s first female governor made it clear her governing style will be far different from that of her pugnacious predecessor. Saying that Maine needed to find common ground again, she offered this promise: “We will bring back Maine’s tradition of civil discourse.”

That kind of discourse had long been a hallmark in Augusta, where politicians thought of themselves as Mainers first, partisans second. But over the last eight years, good political manners became a casualty of LePage’s veto-strewn my-way-or-the-highway governance, carried out with bombast, ad hominem attacks, and crude disparagement of rivals.

With LePage gone, the hope is for a return to more productive politics. 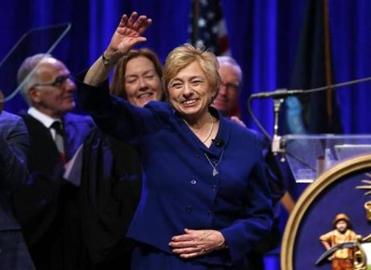 Janet Mills vowed Wednesday to expand health care, fight climate change, and welcome young people and immigrants as she was sworn in as the first woman to serve as Maine’s governor.

“The state as a whole is going to enter an era of good feeling,” predicts Bob Domine, whose firm Critical Insights regularly measures the Maine mood. “Our polling shows that, regardless of what political persuasion people may have, the electorate has grown somewhat weary of abrasive political discourse.”

That’s the kind of discourse LePage personified. He was a politician practiced in pugnacious plurality politics. First elected mayor of Waterville with 40 percent of the vote, he squeaked into the governorship in 2010 with just 38 percent, and even in his 2014 reelection, with all the powers of incumbency, could muster only 48.2 percent.

Mills, by contrast, ran as a conciliator and consensus-builder, someone who could work with the legislature to address Maine’s problems. And in doing so, she became the first nongubernatorial incumbent to win an outright majority since Ken Curtis back in 1966. Making the change all the more emphatic, voters returned the legislature to full Democratic control.

In embracing Mills, Mainers chose a woman who, as attorney general, had often been at loggerheads with LePage. And turned its back on LePage Lite, GOP nominee Shawn Moody, who had LePage’s blessing and the help of his brain trust, such as it was, and had pledged to continue his legacy.

Beyond his periodic racially tinged outbursts and personal attacks, LePage was best known for his diehard opposition to expanding Medicaid, as allowed under the Affordable Care Act. Doing so would make health care available to some 70,000 low-income Mainers. Nevertheless, he vetoed legislation authorizing that expansion no fewer than five times. Comporting himself more like a king than an elected public servant, LePage continued that opposition even after Mainers went to the polls in 2017 and strongly approved a Medicaid-expansion ballot question. Claiming that the state simply couldn’t afford its share of the cost — some $60 million a year — he put roadblock after roadblock in the way.

That negative legacy will soon be washed away as well. In her first day in office, Mills directed the Maine Department of Health and Human Services to move forward with Medicaid expansion.

And now the hopeful national note.

LePage has boasted that he was Donald Trump before Trump, and, though that’s a very strange thing to brag about, he was right.

He never had the full or enthusiastic embrace of the state. But over time, more and more Mainers grew weary of his style, with only 40 percent approving of his performance during his final months in office.

There’s something instructive in that. In the beginning, politicians like LePage or Chris Christie or Donald Trump seem refreshing to those who mistake their rudeness or crudeness for candor, their pugnacity for authenticity, their combativeness for commitment.

But in the longer run, pyrotechnic politics is not just tiresome over time. It’s also counterproductive in an enterprise where collegiality and compromise are crucial to good governance.