In a typically offhand remark, President Trump the other day rendered his personal assessment of our various post-9/11 wars, interventions, and punitive expeditions. “Seven trillion dollars. What a mistake,” he said. “But it is what it is.”

The seven trillion is merely a guesstimate, of course. No one, least of all the lords of the Pentagon, really knows how much our sundry military campaigns, large and small, have cost. Yet at this point, total expenditures certainly reach well into the trillions. And whatever the current tally, that sum will inevitably increase as our wars drag on and as downstream obligations – care for veterans, for example – pile up for decades to come.

That Trump himself should characterize those wars as mistaken represents a moment of plain speaking rare in today’s Washington. After all, as the current commander in chief, he owns that mistake and its myriad consequences. We may doubt that the generals occupying senior positions in his administration share their boss’s assessment. Nor, in all likelihood, does the national security establishment as a whole. Yet it qualifies as more than mildly interesting that the individual exercising supreme authority views the entire enterprise as misbegotten.

Imagine the head of Planned Parenthood declaring herself a pro-lifer. Imagine Amazon CEO Jeff Bezos criticizing the American penchant for conspicuous consumption. Imagine Tom Brady announcing that his son will never play a brutal and dangerous sport like football. A sitting American president characterizing ongoing American wars as mistaken is hardly less notable and ought to command widespread public attention.

Of course, Trump is an improbable source of truth. His many critics have become accustomed to dismissing his every word as either false or hateful or simply bizarre. Yet in this instance, I submit, he has uttered a genuine truth of profound importance. 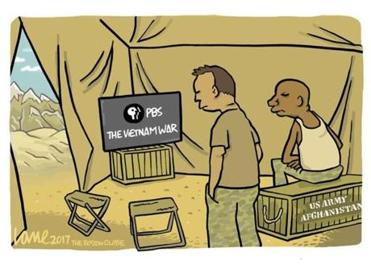 Unfortunately, Trump’s bottom line obscures the implications of that truth: “It is what it is.” There are at least two ways of interpreting that remark. The first is fatalistic: We’re stuck in a heckuva mess and there’s no way of getting unstuck. The second is pragmatic: Here are facts that we dare not ignore.

Americans have traditionally displayed an aversion to fatalism. We like to fancy ourselves can-do pragmatists. Given a problem, we want to fix it. Certainly this attitude is common among business executives. When confronting a failing enterprise — an arena where Trump himself has an abundance of experience — they will either cut their losses or act boldly to restore profitability.

Whether as president Trump leans toward fatalism or pragmatism – each requiring a consistency of perspective that he has yet to demonstrate — remains to be seen. But why wait to find out?

In Hans Christian Andersen’s familiar tale “The Emperor’s New Clothes,” a young child states the obvious: The monarch is naked. Now we have the emperor himself making a comparably self-evident point: Our wars aren’t working.

However inadvertently, Trump has thereby bestowed on the American people a singular gift, putting a presidential imprimatur on a point that critics have been making for years, to no avail. Pointing out that our post-9/11 wars have resulted in a multitrillion-dollar waste of lives and treasure represents easily the greatest achievement of his young administration.

We tend to think that the story of that administration thus far has been one of ineptitude combined with persistent scandal. Yet the real scandal will occur if the American people and their elected representatives in Washington fail to treat Trump’s verdict regarding our recent wars with the respect and seriousness it deserves.

Thank you, Mr. President, for your candor. If for nothing else, on this score, we owe you one.

Andrew J. Bacevich is the author, most recently, of “America’s War for the Greater Middle East: A Military History.”
Loading comments...
Most Popular in opinion
Real journalists. Real journalism. Subscribe to The Boston Globe today.