Tell us what you think of the new Dunkin’ cup: Record a short voice memo using the Voice Memo App for iPhone, or equivalent. Hold the phone normally and at the end of the recording state your name, age, and where you live. Save the file as firstname_lastname and e-mail it to janelle.nanos@globe.comand/oramy.pedulla@globe.com.

Dunkin’ fans, prepare yourselves: The end of the foam cup is finally at hand.

And you know what that means. No more double-cupping.

Citing environmental concerns, the company said last year that it would stop using its signature foam coffee cups, and it has been slowly introducing new reinforced paper cups nationwide.

By the end of the month, the foam cups will be gone from stores throughout New England. And so will the quirky local custom of double-cupping — that is, placing a plastic iced-coffee cup inside a foam cup. 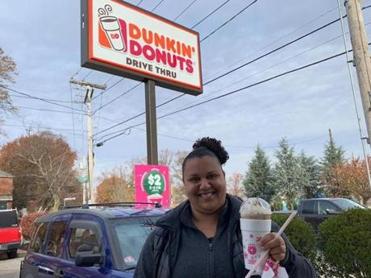 Aware that old habits die hard for customers in Massachusetts and Rhode Island, where double-cupping is especially popular, Dunkin’ Brands is launching a new advertising campaign to help them cope.

“Walking carefully with them through that journey is really important,” said Scott Murphy, the chief operating officer for Canton-based Dunkin’ Brands. “Not all change is bad, and we’ll get through it.”

Many Dunkin’ devotees see plastic and foam as a perfect match. In the embrace of foam, the plastic iced-coffee cup stays chilly longer, and the foam keeps your hand, car, or countertop from getting damp.

“I always double-cup,” said Nicole Cruz as she walked out of the Admiral Street Dunkin’ in Providence on Thursday morning carrying an iced coffee, with whipped cream on top, in a plastic cup inside a foam cup. “It’s winter, so I don’t have to hold an ice-cold cup. And in summer, it keeps it colder.”

So Dunkin’ is running ads to announce the #DoubleCupBreakup, with slogans like “Consciously Un-cup-ling” and “The Double Cup is Breaking Up.” Some stores are giving away reusable insulating sleeves called Koozies to help ease the physical (and emotional) sting of ice on customers’ fingers.

Murphy said the company is hoping humor will help people to develop new habits. He gets that it’s not easy.

“The texture of that foam cup, the slope of the sides, it’s just a very familiar feeling,” he said. “There’s just this intimate connection that we’re changing.”

According to “mythical legend and folklore” inside Dunkin’ corporate headquarters, double-cupping originated in Rhode Island , then spread throughout New England. The cups fit together so perfectly, they should always be together, many have argued. Some franchisees serve cold beverages in the hot cups without asking.

So breaking up the pair was not taken lightly, said Murphy, who has heard from customers who hate the change.

“They say, ‘You're changing the best part of my day.’ Which was literally soul-crushing,” he said.

Light as air, cheap, and capable of handling scorching-hot beverages, Dunkin’s foam cups have been a brand mainstay for decades — far longer, many would argue, than reasonable, given their environmental impact. The company’s own “cup journey” away from foam was a 10-year odyssey for one man, Joseph “Joey Cups” Hellyar, whose mission was to replace foam with the perfect paper cup.

Hellyar, who oversees packaging for the brand, had to find a new cup that would keep coffee warm without burning hands. It had to be cheap, so customers wouldn’t pay more. Franchisees had to buy in, and he had to find manufacturers who could produce enough of the new cups.

“It was pretty stressful,” said Hellyar.

There were some misses, like cups made from mushrooms. There were MIT cup summits, bringing global coffee brands together to discuss the future of the cup.

Ultimately, Hellyar landed on the double-walled cup that he believes will stand up to foam’s legacy. Executives admit the new cup isn’t perfect — it’s still lined with plastic, rendering it unrecyclable by most standards — and the lid is still plastic as well. But the brand says the change will remove 1 billion foam cups from the waste stream each year, including 400 million from New England alone. Styrofoam can take hundreds of years to break down.

Not everyone is convinced it’s the right approach.

Kirstie Pecci, a senior fellow of the Conservation Law Foundation, said Dunkin’ has dragged its feet on the issue, and will still send billions of cups to the landfill each year. “Rather than spending a lot of money and time on a new kind of cup and lid that will also waste a lot of resources, I would love to see Dunkin’ invest their money and time into creating an incentive program” to get people to bring their own cups, she said.

Dunkin’ says franchisees can create their own incentive programs for reusable cups. But for now, the brand is working to replace all foam cups with the double-walled paper cups in the next two weeks, and offering area franchise owners and team members “readiness kits” that help them explain the change to consumers.

Now it’s time to see if consumers will adapt to the change.

In downtown Boston on Thursday, Nicole Phillips said she was just fine with the end of foam. She used to be a double-cupper, until “somebody actually shamed me” into ditching the practice, she said. For a while, she kept a foam cup in her office and her car, but now uses a Dunkin’-branded neoprene sleeve to help insulate her iced coffee. It looks just like a foam cup.

Nicole Cruz also tries to reuse the same foam cup three or four times before throwing it away. And she can see why Dunkin’ Donuts wants to ditch the double cup. She has four children who are concerned about the environment.

“They are focused on the planet, as am I, for the sake of their children and their children’s children,” Cruz said. So she’s already planning to get a reusable insulating sleeve.