We want to hear what you think about the new Dunkin’ cup! Will you miss the old one? Record a short voice memo using your smartphone (Using the Voice Memo App for iPhone, or equivalent). Hold the phone normally as if taking a call when you record. At the end of the recording state your name, age, where you live. Save the file as firstname_lastname and e-mail it to janelle.nanos@globe.com and/or amy.pedulla@globe.com.

PROVIDENCE — Before putting down some hot asphalt, Jake Cooper likes to pick up some iced coffee at Dunkin’ Donuts. And when he does, he wants it in a foam cup.

Cooper, who wore a bright yellow safety vest and a Carhartt cap as he grabbed a coffee at the Eddy Street Dunkin’ Donuts, said foam cups keep iced coffee cooler when the pavement is red hot, and they don’t sweat like plastic cups, which swamp his cup holder with condensation. The phenomenon is called double-cupping, and company execs says it originated in Rhode Island, then spread throughout New England.

But now, in a companywide effort to use renewable resources and help the environment, Dunkin’ is ending its use of foam cups in the region. To help double-cuppers cope, it’s rolling out an advertising campaign on Friday encouraging customers in Rhode Island and Massachusetts to prepare for the #DoubleCupBreakup.

But Cooper urged the Dunkin’ honchos to call off their plans to ditch foam cups. 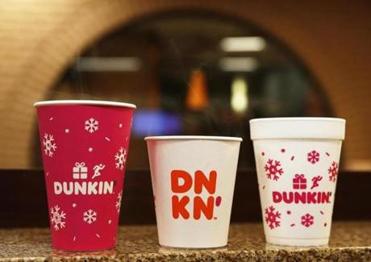 To usher in the end of foam cups, Dunkin’ promotes a conscious un-cup-ling

“Keep the hot cups because it’s going to make everyone in Rhode Island sad,” he said.

Inside the Eddy Street Dunkin’, manager Beau Bowers wore a pin proclaiming “The Double Cup is Breakin’ Up.”

He said that customers at his store buy twice as much iced coffee and hot coffee, and they automatically get their iced coffee double-cupped — with a plastic cup inside a foam cup.

Rhode Island Dunkin’ franchises are bound to face some opposition as they phase out foam cups, Bowers said. “We are going to get the most pushback,” he said.

But Dunkin’ will be launching a campaign from Nov. 15-25 to make customers aware that the days of double cupping are numbered, he said.

Employees will wear buttons saying things like “Everything you love in one cup.” And to ease the pain, his store will be give away reusable insulating sleeves, called Koozies, along with $1 coupons, he said.

“It’s someone’s daily routine you are messing with,” Bowers said. “When you wake up and expect something and all of a sudden it’s gone, it’s going to make an impact.”

But he thinks local Dunkin’ Donuts stores will be able to retain nearly all of their customers because they will still be providing the same coffee and level of service they always have, and employees will be explaining the reasons behind the change.

Bowers said millennials have urged Dunkin’ Donuts to convert from plastic bags to paper bags, which it just did, and they’re calling for the company to stop using plastic straws.

At the Gano Street Dunkin’, manager Anilton Goncalves said the store is getting rid of foam cups as part of a broader effort to “go green.”

The Gano Street store provides a double cup only upon request, Goncalves said. But it’s a popular one, he said.

Some customers are willing to pay more for a double cup, Goncalves said. But employees are letting customers know that double cupping will no longer be an option by the end of the year, when the supply of foam cups runs out, he said.

Liz Douglas left the Gano Street store with an iced coffee in a plastic cup. She admitted she used to double-cup for two specific reasons: The double cups are firmer, so spilling is less likely, and the condensation on plastic cups can leave puddles on her desk.

But now, Douglas said, she uses a coaster at work, and she has come to terms with single cup reality. “I figured it out,” she said.

We want to hear what you think about the new Dunkin' cup! Will you miss the old one? Record a short voice memo using your smartphone (using the Voice Memo App for iPhone, or equivalent). Hold the phone normally as if taking a call when you record. At the end of the recording state your name, age, where you live. Save the file as firstname_lastname and email it to amy.pedulla@globe.com.