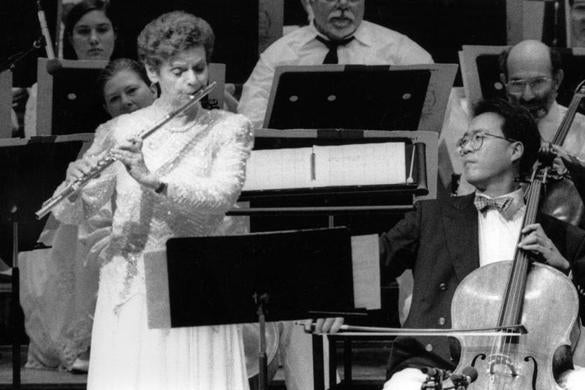 Barbara C. Harris, first woman to serve as an Episcopal bishop, dies at 89

The Right Rev. Barbara C. Harris, the first woman to serve as an Episcopal bishop, was consecrated as a suffragan, or assistant bishop, in the Episcopal Diocese of Massachusetts.

Andy Savitz, environmental consultant with an eye on the future, dies at 66

Mr. Savitz of Brookline was a seasoned Democratic campaign aide-turned environmental consultant who reminded all that "you can’t just live in the moment. You have to have to think about the future."

Amory Houghton Jr. made a habit of welcoming new challenges at ages when many people think their life’s most significant work is in the past.

Honor Blackman, actress who played a Bond woman in ‘Goldfinger,’ dies at 94

Ms. Blackman was a formidable and smoldering British actress who vaulted to long-delayed stardom in the 1960s.

Al Kaline, one of baseball’s finest hitters and defensive outfielders whose Hall of Fame career spanned 22 seasons with the Detroit Tigers, died on Monday at his home in Bloomfield Hills, Michigan. He was 85.

Edward Tarr, renowned trumpeter who delved into past

Edward H. Tarr, a trumpeter and musicologist who became one of the world’s eminent authorities on the instrument, resuscitating long-forgotten repertory and leading the way in historically informed performances of baroque and romantic brass music, died March 24 in Germany.

Former NFL kicker Tom Dempsey, who played in the NFL despite being born without toes on his kicking foot and made a record 63-yard field goal, died late Saturday while struggling with complications from the new coronavirus, his daughter said. He was 73.

Patricia Bosworth, who gave up acting for the writing life, turning her knowledge of the theater into a series of biographies and mining her own extraordinary life for a pair of powerful memoirs, died on Thursday in Manhattan. She was 86.

Kate Mattes, whose Kate’s Mystery Books was a haven for fans and authors alike, dies at 72

For more than 25 years, Kate Mattes ran Kate’s Mystery Books, turning her Cambridge shop into a hub for mystery writers and fans alike.

Harriet Glickman, who pushed ‘Peanuts’ to add a Black character

Ms. Glickman in 1968 persuaded Charles M. Schulz, the creator of “Peanuts,” to add a Black character to his roster of Charlie Brown, Snoopy, and the rest of the gang.

Dr. Frankland was an indomitable researcher who helped legions of hay fever sneezers by distributing daily pollen counts to the British public.

Arianne Caoili, a chess master and a prominent figure both in the chess world and in Armenia, where she lived, died Monday in Yerevan, the country’s capital. She was 33.

Gerald Freedman, who directed countless plays, operas and musicals, including the original “Hair” in 1967 and more than a dozen Broadway productions, and who influenced generations of actors in 21 years as dean of the drama school at the University of North Carolina School of the Arts, died March 17 at his home in Winston-Salem, N.C. He was 92.

Mr. Stern fled Germany with his family to escape the Nazis, returned years after the war to join the Berlin Philharmonic, and later became a leading member of the orchestra.

Bill Withers, soul legend who sang ‘Lean on Me’ and ‘Lovely Day,’ at 81

Bill Withers, a onetime Navy aircraft mechanic who after teaching himself to play the guitar wrote some of the most memorable and often-covered songs of the 1970s, including “Lean on Me,” “Use Me” and “Ain’t No Sunshine,” died Monday in Los Angeles. He was 81.

Adam Schlesinger, songwriter for rock, film and the stage, 52

Adam Schlesinger, an acclaimed singer-songwriter for the bands Fountains of Wayne and Ivy who had an award-winning second career writing songs for film, theater and television, died on Wednesday in Poughkeepsie, New York. He was 52.

Wallace Roney, a virtuoso trumpeter whose term as Miles Davis’ only true protégé opened onto a prominent career in jazz, died Tuesday in Paterson, New Jersey. He was 59.

Kevin Thomas Duffy, a federal judge who presided over decades of high-profile trials in Manhattan, including those of mob bosses, radical revolutionaries and the terrorists who bombed the World Trade Center in 1993, died Wednesday in Greenwich, Connecticut. He was 87.

Dr. James T. Goodrich, who operated on conjoined twins, at 73

The cause of death was complications of the coronavirus, according to the Albert Einstein College of Medicine and Montefiore Medical Center in New York, where Dr. Goodrich was the director of pediatric neurosurgery.

Chloe Wellingham Aaron, who, when she became senior vice president for programming at PBS in 1976, was “believed to be the highest-ranking woman executive at the network level in the history of television,” as the announcement of her hiring put it, died Feb. 29 at her home in Washington.

Michael Sorkin, who championed social justice via architecture, dies at 71 from COVID-19

Mr. Glezos, who remained active in politics into his 90s, died in Athens. He was 97.

Attorney Michael Mone made legal history with a medical malpractice ruling he won 40 years ago, and his other clients included lawyers and judges whose careers were in peril.

David Schramm, an acclaimed stage and television actor best known for his role as the irascible owner of a small airline on the long-running sitcom “Wings” in the 1990s, has died. He was 73.

Dr. Anderson’s explorations of electronic behavior in solid materials like glass, crystals, and alloys led to a Nobel Prize.

The day before he died of COVID-19, Michael McKinnell — famous for co-designing Boston City Hall — left behind his final design.

Tom Coburn, the ‘Dr. No’ of Congress

Dr. Coburn, an ultraconservative Oklahoma Republican and family physician who in 16 years in Congress crusaded for limited government, using a rule-book technicality to block so many bills that frustrated legislators called him “Dr. No,” died Saturday in Tulsa, Okla.

Mr. Penderecki’s modernist works jumped from the concert hall to popular culture, turning up in soundtracks for films like “The Exorcist” and “The Shining.”

Michael McKinnell teamed with his friend Gerhard Kallmann to enter an architecture competition for a new Boston City Hall in the 1960s, and their design resulted in one of Boston's most famous buildings.

John Sears, who helped guide Nixon and Reagan to the White House, 79

Mr. Longo was best known for his long association with trumpeter Dizzy Gillespie.

Maurice Berger, curator Outspoken About Race, Is Dead at 63

Maurice Berger, who as a curator and a writer was a forceful voice against both overt and subtle racism in the art world and other arenas, died Sunday at his home in Craryville, New York. He was 63.

Julia Miles, 90; pushed for gender parity in the theater

Ms. Miles dedicated her career to ensuring that women playwrights and directors had a stage of their own.

When Richard Marek was a young editor at Scribner’s in Manhattan in the early 1960s, he was entrusted with one of the literary world’s most important manuscripts, “A Moveable Feast,” Ernest Hemingway’s intimate portrait of his life as an unknown writer in Paris in the 1920s.

Mr. Neal’s dribbling wizardry made him one of the most well-known members of the beloved Harlem Globetrotters traveling basketball team.

Mr. Reeves was a journalist and author who explored the presidency, the internment of Japanese Americans during World II, the role of the media, and other aspects of American history.

Stanley Sporkin, a legal crusader who, as the chief enforcement officer at the Securities and Exchange Commission, held American corporations accountable for making illicit campaign contributions in the United States and for bribing public officials abroad, died Monday in Rockville, Maryland.

Michael Broadbent, who put wine on the auction block, 92

Manu Dibango, a saxophonist from Cameroon whose 1972 single “Soul Makossa” made modern African music a clear presence on Western pop charts, died Tuesday in a hospital in France. He was 86.

A four-time Tony Award winner and prolific dramatist, he wrote 36 plays, the books for 10 musicals, the librettos for four operas, and a handful of screenplays for film and television.

Boris Stankovic, the longtime head of basketball’s worldwide governing body and a driving force in the fight to allow NBA players to participate in the Olympics, died Friday in Belgrade, Serbia. He was 94.

Catherine Hamlin, healed injured and ostracized mothers in Ethiopia, at 96

Ms. Hamlin and her husband devoted themselves to improving childbirth for thousands of mothers.

A professor of physical education emeritus who coached multiple sports at Amherst, Mr. Mehr died in his Hoschton, Ga., home Feb. 26 of congestive heart failure. He was 91.

Molly Brodak, poet and memoirist of her father’s crimes, at 39

Molly Brodak, a poet who chronicled the trauma she experienced as the child of a compulsive liar and bank robber in a critically acclaimed memoir, died March 8 near her home in Atlanta. She was 39.