“We know what we’re doing up here, but for us, as a small school on the fringes of Maine, to be recognized nationally — for others to take hold of the data and say we’re worthy of being second in the nation — I’m still numbed by it. It’s a great feeling,” he said.

The elite school had fared well in the popular rankings in previous years — placing as high as 19th in 2017 — so he and other staff were anticipating the list’s release, which was scheduled for 12:01 a.m. 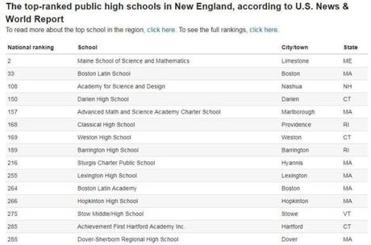 The top 25 public high schools in New England, according to US News

The region’s best-ranked school placed No. 2 in the entire country.

Whittemore said he checked the US News website around when the rankings were set to be published and couldn’t believe his eyes when he saw the school listed as No. 2 in the country.

“I immediately think it’s one of those [online] tracking things, that they know I’m from Maine. This is some sort of joke,” he said. “A hoax.”

He called another staffer at the school, who didn’t buy Whittemore’s claim. Then the staffer checked the website himself and said, “Holy expletive!” Whittemore recalled, censoring his colleague’s remarks.

“I’ve been on a cloud since then,” Whittemore said, adding that the school was buzzing with energy and enthusiasm Tuesday morning. “People are pretty happy around here today.”

The school scored a 99.99 out of 100 on the rankings, just a hair behind Academic Magnet High School in North Charleston, S.C.

The methodology used by US News, and the various approaches taken by other players in the cottage industry of ranking high schools and colleges, have faced criticism in the past.

The company’s chief data strategist Robert Morse said in a statement that US News this year “enhanced the methodology to provide an even more comprehensive ranking that is easier to understand and, therefore, more useful to parents and educators.”

The Maine School of Science and Mathematics, located about a five-hour drive north from Portland, is a magnet school specializing in STEM subjects — science, technology, engineering, and math.

Its 145 students hail from all across Maine and live in an on-campus dormitory. Tuition is paid by the state and need-based financial aid is available to help cover room and board, which was set at $9,300 for the current school year.

All the faculty hold at least a master’s degree. Half have a doctorate, Whittemore said.

Students can earn an associate’s degree while in high school, through a partnership with the University of Maine.

Graduates have gone on to prestigious colleges — including MIT, Johns Hopkins, RIT, WPI, CalTech, UC Berkeley, and several of the Ivy League universities.

Whittemore said the high schoolers are socioeconomically diverse. And they’re a talented bunch, but “they’re not the know-it-alls.”

Students’ Monday-to-Friday schedules resemble college life, with occasional gaps during the day between classes and some night courses, Whittemore said. Students get weekends to relax, but by Sunday afternoon many are prepping for the week ahead or participating in study groups.

Every four weeks, for at least four days, students are given a break away from the remote campus in Limestone, a 40 square-mile town home to only about 2,000 residents. They board buses that shuttle them to their parents in other parts of Maine.

US News, on its website, said the school “aims to foster a community learning environment by offering small class sizes, extracurricular activities and work assignments,” and noted how its curriculum “includes Advanced Placement courses in physics, English and statistics,” and that students get internship opportunities and can conduct research projects.

The school opened in 1995, said Whittemore, 61, who was the first employee hired back then.

He said it has consistently been named Maine’s best public high school by the US News rankings.

Nationally, the school has ranked well in some years. But in other years, including just last year, the school has been missing entirely from the outlet’s list of the top high schools nationally, Whittemore said.

Whittemore said he didn’t know why that has happened but wondered whether perhaps the school’s graduating class was too small to qualify for the national list in some years.

Whittemore on Tuesday said the school’s second-place ranking was a much-appreciated reward for a job well done — and motivation to keep trying harder.

“We still have room for improvement. We’re not done yet. We’re not resting on our laurels. That’s for sure,” said Whittemore. “Next year’s No. 1.”