The history of pranks — or “hacks” — at MIT is extensive, with homages to pop culture, nods to charity, and lots of digs at Harvard. The identities of hackers are often kept secret but, as in the case of the Captain America shield, they’re known for carefully planning their misdeeds months in advance.

“The priority is safety for people, and safety for MIT structures,” one told the Globe on Sunday.

Although few hacks are officially condoned by the university, they’ve become part of the school’s mythology and hacking is widely discussed on the MIT admissions website.

They’re even categorized by year, location, and topic on this MIT-hosted page. 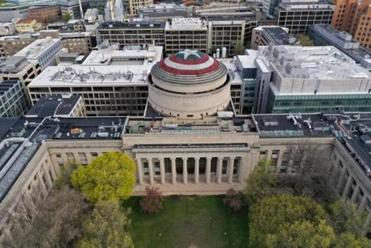 A group of MIT pranksters transformed the school’s Great Dome Saturday night into Captain America’s shield in celebration of the new “Avengers” movie.

The Globe has been on hand to document plenty of hacks. Here’s a look back at several.

The 1982 Harvard-Yale balloon prank, pulled off by a group of fraternity brothers, was featured on the front page of the Boston Sunday Globe, and remains one of MIT’s best-known hijinks.

Members of MIT’s Delta Kappa Epsilon fraternity planted an MIT-themed balloon under the grass midfield at Harvard Stadium and launched it during the Harvard-Yale football game.

The balloon apparently didn’t intimidate Harvard, who ran up its highest score ever against Yale, scoring 45 points. (Harvard has only matched that point total twice: in 2011, when the Crimson won 45-7, and in last year’s game at Fenway Park, when they prevailed 45-27.)

The Great Dome of MIT’s Building 10 has been the site of many a prank, including most notably, the stationing of a fake MIT police car atop it in 1994. Its visible location along the Charles River and its size and scale make it an intriguing pedestal, and its status as a campus symbol make it a landmark for ambitious hackers.

The dome’s height and size has presented a problem for hackers, though, and at least one person has died while climbing it. Nicholas W. Paggi, a 2015 MIT graduate, died after he slipped and fell from the dome in 2017, due to what the MIT campus newspaper called “a hacking accident.”

Over the last several decades, the dome has featured hacks from a fake MBTA car to the details of the head of R2-D2 from “Star Wars.”

The Great Dome is also often used by hackers to commemorate special events or anniversaries. Besides the 2003 installation of a Wright Flyer replica, hackers have honored the lunar landing, as well as the opening of movies.

Many MIT hacks have involved digs at Harvard, CalTech, and other MIT rivals. Besides the 1982 balloon prank (inspired by a similar explosives-based prank from the 1940s), there have been other hacks designed to humiliate or intimidate MIT’s perceived opponents.

Former MIT president Jerome Wiesner once said in a speech to students that “getting an education from MIT is like taking a drink from a fire hose.” The expression has been used in hacks, on t-shirts, banners, and all many of MIT paraphrenalia since then.

According to “Nightwork,” a book detailing the histories of the MIT hacks, one such hack involved an actual functional fire hydrant water fountain rigged up by hackers in 1991. It was placed outside the largest lecture hall on MIT’s campus so students passing by during finals week could take a drink.

Previous Globe reporting was used in this story. Peter Bailey-Wells can be reached at peter.bailey-wells@globe.com. Follow him on Twitter @pbaileywells.
Loading comments...
Most Popular in metro
Real journalists. Real journalism. Subscribe to The Boston Globe today.