The Mega Millions jackpot surged to a world-record-shattering total of $1.6 billion this weekend, as 13 weeks of drawings have gone by with no grand prize winner.

With no winner in last Friday’s drawing and another pick on tap for Tuesday, many will be flocking to their nearest gas stations, bodegas, and grocery stores to try for a chance at claiming the jackpot.

But the more inexperienced lottery player might get to the counter to purchase a ticket, only to be stymied by how to pick their own numbers, or even how the process generally works.

Here’s a breakdown of how to buy a ticket for the more-casual lotto player.

Generally speaking, how does the game work?

Playing Mega Millions is actually fairly simple: You pick five numbers between 1 and 70, and then another number — the “mega ball” — between 1 and 25. 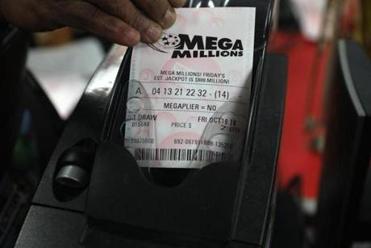 By Tuesday afternoon, ticket retailers in Massachusetts were selling about 7,000 Mega Millions tickets every minute.

If you match all five numbers (in any order) and the mega ball, then you win the $1.6 billion jackpot.

If you match all five numbers without the mega ball, you would win $1 million. You can also win smaller prizes for matching one through four of the numbers and the mega ball. Smaller winnings start at $2.

Here’s a look at the payouts for matching numbers and mega balls, according to the Massachusetts Lottery website:

You can also add a “megaplier” option, which costs $1 extra per play. That option would multiply your winnings — excluding the jackpot — between two and five times, depending on which number is drawn as the multiplier.

The folks over at Iowa’s lottery division have a pretty easy-to-follow video explainer:

How much does it cost to play?

One Mega Millions ticket costs $2 to play; adding on the $1 megaplier option raises the price of one ticket to $3.

How do I ask to buy a Mega Millions ticket without sounding like I don’t know what I’m doing?

If you want to pick your own numbers, most stores will have sheets with the lottery game’s name at the top. Grab one, fill it out (more on that below), and bring it up to checkout.

If you just want an automated ticket without choosing the numbers yourself, ask the clerk for an “easy pick” ticket. This means the numbers on your ticket are randomly assigned. This is the fastest option if you’re in a time crunch or don’t feel particularly sentimental about picking your own numbers.

However, in general, there’s no shame in letting the store clerk know that you’re new to the process. Massachusetts stores that sell a winning jackpot ticket receive a $50,000 bonus — not to mention free media attention — so there’s a good chance they want you to purchase that ticket in-house rather than taking your business elsewhere.

I want to pick my own numbers, but this sheet is wicked confusing. Help?

You’re not alone in thinking so. A certain intrepid reporter tried to pick her own numbers . . . and almost instantly gave up.

In Massachusetts, you can play three times, or tickets, per sheet. To fill out the sheet, ask the cashier where they are located if you can’t find them (they should say “Mega Millions” pretty clearly at the top), and then grab whatever writing utensil is nearby (most stores will have some floating around, or will provide them when asked). You also need to fill out the bubbles in pencil or blue or black ink.

If you want to choose the megaplier option, which pays out more for a winning ticket (as outlined in the game’s rules above), fill in the “Yes” box located all the way to the right of the ticket under the “Megaplier” header. One thing to note: Filling in this bubble means all the games you have filled out on that sheet will then have this multiplier option, which costs $1 extra per play, or $3 extra total if you’re playing three games per sheet. (If you’re picking numbers for several tickets and only want the multiplier option for certain ones, you will have to fill out separate sheets.)

When in doubt, ask the cashier for help — there’s a good chance they know the drill.

One thing to note: Although you might be inclined to pick lucky numbers that coincide with birthdays and anniversaries, the first five numbers in play reach as high as 70, which means those who pick only low numbers could have slighter odds of winning.

As for the numbers that have historically hit the most? Since 2010, that honor goes to the number 2, with 92 hits, followed by the numbers 20, 11, 31, and 17. The most hit Mega Ball number is 9. (Lottery officials are quick to point out that the number selection is random, so there’s no reason that what hit in the past will be selected again.)

No, you can’t use a credit card.

Similar to gambling in casinos, you need to buy lotto tickets with cash — credit cards are not accepted. (Or, as a prickly New Jersey gas station clerk told one reporter’s friend as she tried to hand him a credit card this weekend, “What, you expect the lottery to pay you more than a billion dollars on credit?” Touché.)

There is a cutoff time to buy a ticket.

You must buy your ticket by 10:45 p.m. Eastern Standard Time, according to Christian Teja, the Massachusetts Lottery’s communications director.

When is the drawing? How will I know if I won?

The drawing will take place Tuesday night at 11 p.m. in Atlanta. If no one wins, the next drawing would be held at 11 p.m. Friday.

Some local TV stations are planning to broadcast the drawing because of the increased public interest, Teja said.

However, for those planning on watching the World Series during that time instead, the results will be available within minutes on masslottery.com, as well as on the Lottery’s Facebook, Twitter, and YouTube pages.

Lottery officials will also announce whether someone won by Wednesday morning, Teja said. He could not give an exact time frame but acknowledged it would probably be announced by the time people are getting up or going to work in the morning.

And if no one wins Tuesday’s jackpot drawing, “There is a good chance it would reach the $2 billion mark for the next drawing,” Teja said.

If you hit the jackpot, lottery officials recommend taking a deep breath, putting your winning ticket in a safe spot, and consulting with a reputable financial planner before popping over to the lottery headquarters.

What are the odds I’ll win?

You probably already knew this, but the likelihood of actually winning is abysmally slim. The odds of claiming the Mega Millions jackpot — 1 in 302.5 million — means there are 302.5 million potential number combinations, or a little less than one combination for all 328 million people living in the United States.

For last Friday’s drawing, about 59 percent of possible combinations were taken. But officials estimate that 75 percent will be sold by Tuesday night’s drawing.

How much money do I actually get if I hit the jackpot?

Despite what all those billboards are telling you, don’t count on banking $1.6 billion.

Nearly all winners decide to be paid out by taking the lottery’s cash option in one lump sum, which was about $913.7 million as of Tuesday afternoon. After federal taxes and state deductions, which vary across the country, winners will generally end up with around half that amount. (In Massachusetts, the winning amount will have 24 percent taken out in federal taxes, and 5 percent taken out in state taxes.)

Winners can also choose the annuity option, which provides one initial payment and annual graduated installments over 29 years. The annuity’s main advantage is that people get the whole $1.6 billion.

“The cash option is based on cash from the sales available to fund the jackpot,” Teja said. “The annuity is derived from the principal and interest of that cash amount over 30 years.”

Of course, some ticket holders can win a smaller amount, as noted above. And because multiple people can hold the same winning numbers, the final amount could be split several ways among the winners.

Teja said he expected the jackpot to stay around $1.6 billion for Tuesday’s drawing.

Do I have to cash in my ticket at the same store I bought it?

If you bought your ticket in Massachusetts, you will have to cash your winnings in Massachusetts. However, if you won a smaller amount, you don’t necessarily need to return to the same store to claim your prize — any retailer in the state that participates in the lottery can pay out.

And although one friend insists that buying lottery tickets when you’re visiting a different state is good luck, it sure would be a pain to drive to, say, New Jersey to cash in a winning ticket — especially if it’s a smaller amount. (Then again, if you’re suddenly flush with jackpot winnings, one would guess you could easily afford the travel expenses.)

How long do I have to claim my winnings?

States have different rules, so depending on where you purchased the ticket, you have from 180 days to a year. In Massachusetts, winners have one year to claim their prize. (Lottery officials can tell when someone has won and their location, but the person will still need to actually show their ticket and claim their prize.)

Can I keep my name secret if I win?

If you bought your ticket in Massachusetts, you can effectively hide your identity from the public by creating a trust or other legal entity that can claim the prize. However, the entity’s trustee or a legal representative will have to claim the prize, with a photo taken and all — and that will be made public record.

Meanwhile, jackpot winners can remain anonymous in eight states — Delaware, Georgia, Kansas, Maryland, North Dakota, Ohio, South Carolina, and Texas. (In Arizona, people who win more than $600 can keep their names secret for 90 days after claiming prizes, but after that names are public record.)

In New Hampshire, a woman who recently sued to keep her name private after winning a $560 million Powerball jackpot prevailed in her legal fight. The judge ruled that her identity will remain off-limits to the prying eyes of reporters who file public records requests, but her city or town of residence will be disclosed.

Material from the Associated Press was used in this report. Globe correspondent Andres Picon contributed to this report.
Loading comments...
Most Popular in metro
Real journalists. Real journalism. Subscribe to The Boston Globe today.