Three employees under Secretary of State William F. Galvin are being stripped of some pay after an internal review determined they had performed political tasks on Galvin’s behalf at times that seem to conflict with their taxpayer-funded work schedule, his office disclosed Tuesday.

The internal probe, first launched nearly two weeks ago, also found that three other employees used sick time on days they also were listed as submitting nomination papers to local clerks’ offices for Galvin’s reelection campaign. They will be charged vacation or personal time instead.

The review focused on 19 employees who performed political work on Galvin’s behalf during weekdays or during normal business hours. Bryan Lantagne, a Galvin deputy who led the probe, said at least 13 of them made a “good faith” effort to use personal or vacation time, or their lunch breaks, to help Galvin and didn’t do so on the taxpayers’ clock.

A 14th employee used half-hour increments of vacation time in some instances, but also used a sick day on another occasion a town clerk identified him as filing signatures.

But even though he found other instances were “questionable,” Lantagne did not conclude that any of the employees violated state ethics rules, which bars non-elected employees from performing political work on public work time. 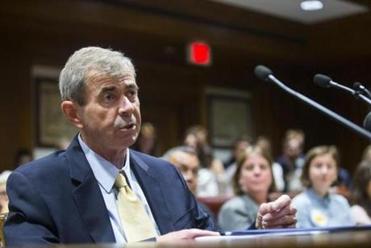 Secretary of State William Galvin is leaning heavily on public employees to help his campaign.

The findings come in the wake of several Globe reports that raised questions about how closely Galvin’s office has become intertwined with the political campaign of the six-term Democrat, who is facing his first serious primary challenge in years.

Galvin, who also is the state’s chief elections officer, opened the review after the Globe reported this month that more than a dozen employees had been visiting clerks to turn in voter signatures he needed certified in order to make the ballot this fall.

As a result, Galvin said, he is ordering his staff to begin using electronic time sheets, which his office said “will impose greater accountability and strengthen record-keeping and supervision of employees.” The workers must provide “detailed justification” for time they use through a new Web-based platform.

Debra O’Malley, a Galvin spokeswoman, declined to identify which employees Lantagne said performed the work on their regular work days or while taking sick time, saying she’d have to check with the office’s public records division if that information could be released. An attorney in Galvin’s public records office was among the 19 employees the Globe had identified.

State employees are not specifically barred from doing political work, but they’re not allowed to perform such tasks while on the public clock. Elected officials also are not allowed to “use public resources for election-related political purposes,” according to the State Ethics Commission.

In a three-page report, Lantagne said he determined that in many cases, employees had submitted the paperwork for Galvin before or after their regular shifts or visited clerks close to where they worked while using slices of personal time or their lunch break.

But in the cases of the three employees, the regular time listed on their time sheets “seems to conflict with the papers’ delivery times at the town clerk’s offices,” he wrote.

“Thus, this raises an inference that the employee delivered the sheets during work hours,” Lantagne’s report reads.

“These employees’ use of official work hours to submit the sheets were questionable,” he wrote at another point.

Each of the three will receive formal letters of reprimand and will be warned that any “future events” could lead to further disciplinary action, up to termination. The office also intends to “clawback” the work time that was paid to them during the delivery of the nomination papers, he said.

His report did not indicate how much work pay could be involved.

Sixteen of the employees will receive letters and a “cautionary note” reminding them of the conflict of interest guidelines.

Galvin’s challengers had criticized the internal review as insufficient and have called for an independent investigation.

“Clearly this entire episode shows that Secretary Galvin is more committed to self service than public service,” said Anthony Amore, a Republican running for the office.

City Councilor Josh Zakim, who is challenging Galvin in the Democratic primary, said the reports “raised serious, systemic questions about the internal workings of Secretary Galvin’s office and his campaign — serious enough to merit more than a hasty internal review by a subordinate.”

Zakim also benefited from public employees helping his reelection campaign to the council last year, when in 11 instances a member of his taxpayer-funded staff filed nomination papers on his behalf. Zakim said the staffers used personal time in each instance.