Where is Boston’s monument to Martin Luther King Jr.?

Nine years ago Sunday, Mayor Tom Menino stood before a packed Twelfth Baptist Church in Roxbury, King’s oldest son at his side. The mayor promised to “build a statue to Dr. King and Coretta right here in our city.”

There was thunderous applause. Advocates and politicians had been pushing for a public monument to the slain civil rights pioneer for years. Now it would finally happen.

But the noble project was over before it began, a casualty of the recession and of lost momentum. We still have no King statue. We don’t even have a plan for one.

That’s ridiculous, when you consider how closely King and Boston were connected. 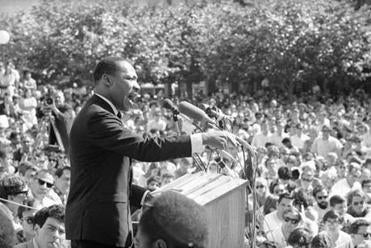 How will the holiday affect your routine?

In the early 1950s, he was a doctoral student at the school of theology at Boston University, and lived in the South End. At BU, which still holds his papers, King found a rigorous intellectual community that was remarkably accepting of African-American students, given the times, and a mentor in Howard Thurman. The dean of BU’s Marsh Chapel, Thurman had visited with Mahatma Gandhi in the 1930s. He passed along the Indian leader’s philosophy of nonviolent resistance to King, says Walter Fluker, Martin Luther King Jr. Professor of Ethical Leadership at BU, and an expert on Thurman.

“I went to place after place where there were signs that rooms were for rent,” he said later. “They were for rent until they found out I was a Negro.”

He was an assistant preacher at Twelfth Baptist, where he met his wife, Coretta Scott, a student at the New England Conservatory of Music.

By April 1965, when King returned to the city to lead a mile-long civil rights march from the South End to the Boston Common, he had won the Nobel Peace Prize and captivated the world. He visited tenements and broken down schools in Roxbury, and urged a spellbound Legislature to end school segregation.

“Some of the same things wrong in Alabama are wrong in Boston,” he told lawmakers, according to a Globe account. “This is not a battle of white people against black people. It is a struggle between the forces of justice and injustice.”

After the march, King stood in a cold drizzle, at the Parkman Bandstand, before a crowd of 22,000. He spoke to the racial divisions that were tearing the city apart.

And then: “The vision of the new Boston must extend into the heart of Roxbury. Boston must become a testing ground for the ideals of freedom.”

If Boston can manage to erect monuments to Red Auerbach and Edgar Allan Poe, surely it can find a way to pay proper tribute to one of the most significant figures of the 20th century.

That exhortation was prophetic. Within the decade, school desegregation sorely tested Roxbury, South Boston, and the rest of the city, changing it forever.

We’ve come a long way, but we’re still struggling with the problems King spoke of on the Common, the promise of democracy not yet fully real.

What does the city have to mark King’s hopes and achievements, at this moment when we’re in dire need of reminders of them? There is Martin Luther King Jr. Boulevard. And “Free At Last,” a beautiful, abstract sculpture at BU. But it’s insufficient testimony to the man and the movement Boston helped make.

“We need a portrait of the man himself, that can illuminate who he was, and the larger idea he represents,” says L’Merchie Frazier, an artist and director of education for the Museum of African American History.

Chief of arts and culture Julie Burros says the city would “absolutely be very open” to a King sculpture if the community wants it. Of course, getting any monument built here involves years of effort, plenty of controversy, and hundreds of thousands of dollars.

But if Boston can manage to erect monuments to Red Auerbach and Edgar Allan Poe (who loathed the city), surely it can find a way to pay proper tribute to one of the most significant figures of the 20th century.

That tribute should be somewhere prominent, even exalted: Perhaps within sight of the bandstand where King stood under an umbrella on that April day, urging the city to strive for a world he would not live to see.