A survey of information from more than two dozen of the largest New England colleges found that reports of “forcible sex offenses” climbed by 40 percent overall between 2012 and 2013, according to a Globe review of data that colleges provided in annual federally mandated reports released last week.

Last year, there were a total of 289 reports of the offenses at the colleges. That compares with 206 in 2012. The 2013 total was more than twice as many as reported five years before.

Sexual assaults on and around college campuses, long considered a vastly underreported crime, have received increased attention in recent months from the Obama administration, the schools, and students. As a result, campuses have stepped up training, support, and outreach, and the rising number for 2013 is seen as signaling that victims are more comfortable reporting assaults.

“It means that students are coming forward and reporting crimes that are happening and ending that culture of silence,” said Alison Kiss, director of the Clery Center for Security On Campus, a nonprofit that trains colleges to comply with the federal Clery Act. 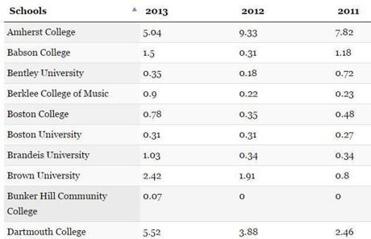 While complete data will not be available from the US Department of Education until at least December, the Globe reached out to a select number of schools for updated numbers.

Specialists also believe the spike in reporting may indicate that colleges are becoming more thorough and transparent in collecting and disclosing sexual assault data.

At all but four of the campuses in the review, the number of sexual assault reports rose or held steady last year.

Hampshire College said its reports of assaults increased from 13 to 20, giving the school the highest rate of sexual assaults per 1,000 students in 2013 — 13.6 — among colleges surveyed by the Globe.

Diana Fernandez, Hampshire’s coordinator for Title IX, a federal law that mandates gender equality in campus life, attributed the above-average rate at the college to its new efforts to inform students about how to report the crime and about the increased resources available for victims.

She said Hampshire recently added online training for students on sexual assault prevention. Hampshire has also expanded workshops that teach students about consent and how to intervene if they see a friend in a vulnerable situation.

“I think the numbers will continue to rise here and at other campuses for years to come, and that’s really important because it gives us a better picture of what’s happening,” said UConn’s Title IX coordinator, Elizabeth Conklin.

Campus spokeswoman Caroline Hanna said in an e-mail that the college has taken numerous steps to better prevent and respond to sexual assault and encourages students to report the crime. But, “as these numbers tend to fluctuate across institutions and year over year, it is difficult for us to speculate about the reason for the change in last year’s numbers,” Hanna said.

Under the Clery Act, colleges are required by Oct. 1 each year to issue a report that includes statistics of allegations of crimes that occurred on campus, including dorms and other public property; at property owned by, but separated from, the main campus; and at fraternities and sororities. They exclude other off-campus housing.

An estimated 88 percent of college victims do not formally report sexual assaults, federal studies suggest. Even so, some area schools have reported surprisingly low numbers of assault allegations, given their size.

Suffolk University, which enrolled 8,800 students last year, said there were no reports of sexual assaults in 2013. Since 2008, the downtown university reported two cases, both in 2010.

School spokesman Greg Gatlin said the low numbers may be because fewer than 15 percent of Suffolk students live on campus.

The university “works closely with students, faculty, and staff to encourage the reporting of any incident and to make our community aware of available resources,” he said in an e-mail.

Bunker Hill Community College, with an enrollment of about 14,000, listed one report of sexual assault in both 2008 and 2012, and zero reports in the four years in between.

Spokeswoman Karen Norton said the college is confident its data is accurate. “We have a lot of processes in place about how we gather the information and report it,” Norton said.

The two-year school is different from more traditional colleges, she said: There are no dormitories; two-thirds of the students are part time; and about one-third take at least some of their classes online. The average age of students is 27, she said.

Without singling out specific schools, the Clery Center’s Kiss and other experts say that low numbers may indicate colleges are not doing enough to raise awareness about the issue or to educate how victims can report. It may also mean colleges are not being honest or thorough in their reporting, experts said.

In recent years, numerous colleges have been caught or accused of failing to disclose individual reports of sexual assault or for releasing inaccurate data.

Under new federal guidelines, colleges were required for the first time in 2013 to also compile and disclose the number of reports of dating violence, domestic violence, and stalking on their campuses. But two local schools failed to include those statistics on their latest Clery reports.

One school was Roxbury Community College, which acknowledged last year — amid an ongoing federal investigation — that it had underreported crime figures in prior Clery reports. Campus president Valerie Roberson said in an e-mail that the college had no reports of domestic violence, dating violence, or stalking for 2013.

“As a commuter college, these crimes would be unusual, especially when compared to what might occur at a residential college,” she wrote.

Wentworth Institute of Technology also failed to include the newly required data.

After the Globe pointed out the omission, Wentworth spokesman Caleb Cochran said it was an oversight. On Thursday, the school issued an updated report saying it did not receive reports in any of the three categories last year.

Among the region's largest colleges, Hampshire College had the sharpest increase in the number of reported sexual assaults per 1,000 students since 2008. The college reported 20 such allegations in 2013, up from 13 the previous year.

Breakdown of assaults in 2013, by type

Olivia Hall for The Boston Globe