The back of his seat nearly rammed my forehead. He didn’t ask. He didn’t look behind him to see if it would inconvenience anyone. He didn’t say, “Would you mind?”

He just hit the button on the side of his armrest, shoved back, and pushed himself into my personal space. And there I was, with a stranger’s full head of salt-and-pepper hair practically in my lap for the duration of our United flight to Chicago.

Seriously, who does that?

When drinks came, I had to put mine on my son’s tray next to me because there was not an unobstructed path from my tray to my mouth. In order to have my husband take a picture of this guy’s unnerving proximity to me, I couldn’t simply reach down and grab the iPhone from the bag under my seat — no room to bend down without literally planting my face on the crown of his head. Instead I had to kick the bag out awkwardly into the aisle with my foot, scrunch my face sideways against the back of the seat, and reach around for a while.

For the rest of flight, the first leg of our journey to Florida for a week with our two kids, I had to sort of hold my book up and in front of me to my left, right in the middle of the aisle, so that I could have it sufficiently far from my face so that the words didn’t blur. (When you get older, you’ll understand.) 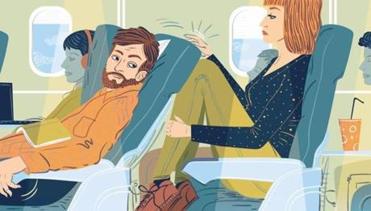 My ticket entitles me to recline, and doing so doesn’t make me an entitled person.

Let’s be clear about one thing: Those few inches in front of you are not your space.

When the flight attendants or my fellow passengers had to get by, I pulled my book in, because — you know — I’m a good person who doesn’t like to inconvenience people.

So why would the guy in front of me choose to inconvenience me?

In my book, unapologetic airplane recliners are on the same page as people who smoke cigars on beaches, talk in movie theaters, and don’t clean up after their dogs. It’s that I’m-the-only-one-in-the-world-who-matters mindset of people who don’t hold doors, jabber on speaker phones in public, and prophylactically put out orange cones to save parking spots in South Boston before a single snowflake has fallen.

Back to the salt-and-pepper hair in my lap. He was a big guy, linebacker-like. I was feeling crunched in my seat, so I can only imagine his discomfort. And look, I too would like to push back, mainly so I can rest against the non-reclined seat next me so my head doesn’t bob embarrassingly when I fall asleep, waking me up only after I’ve made a weird sound.

And yes, I know that the seats are actually designed to recline (a frequent argument of the unrepentant recliners of the world) but car horns are designed to beep. Would you beep in the pre-dawn hours on a quiet street? Car seats are designed to push back. Would you do it if meant crunching the knees and feet of the person behind you?

Also: If the main complaint is leg room, how does leaning back do anything to alleviate leg room? But I digress.

My main problem is that I don’t like pissing people off. I knew that if I pushed back, to compensate for the strange head that had encroached so far into my space, I would be irking the person behind me. We would only be in close proximity for a few hours, sure, but I don’t like people hating me. Probably a character flaw.

The more self-righteous way to say that is that I believe in the Golden Rule. (Heard of it, Billy Baker?) I wouldn’t want someone to do this to me — in fact I actively hated the fact that someone was doing this to me — so why would I do it to someone else?

But while I (and the majority of my Facebook friends, after I posted a picture) vilified the guy in the Bruins sweatshirt who had so thoroughly invaded my space, the real villains here — arguably — are the airlines and their relentless quest to eke more money off of every flight.

I get this, too. If they didn’t do this, then our little winter sojourn to Florida would have probably been prohibitively expensive (instead of just I-can’t-show-my-husband-the-bill expensive). But United, from what I can tell, is worse than the rest. As soon as I sat down, the seats felt palpably closer and my kvetching began.

In my youth, I used to recline all the time, not because I was a different or worse person (though some might argue otherwise) but because it didn’t feel like you were pinning someone against the seat behind you when you did it.

But now the airlines have created a situation in which you must think about what kind of person you want to be and how you want to treat others before you push the button on your armrest. So it’s not the guy in front of me I blame; it’s the airlines, which have sacrificed comfort and common civility in the name of profit.

Seriously, who does that?

Jennifer Peter can be reached at jennifer.peter@globe.com.
Loading comments...
Most Popular in lifestyle
Real journalists. Real journalism. Subscribe to The Boston Globe today.