By Beth Teitell Globe Staff  September 10, 2018
Stay home alone binge-watching Netflix. If you do go out, commune with your phone only. Do not volunteer. Join no groups. Exude an “unavailable” vibe when walking the dog. Or better yet, get an indoor cat. Runners, run solo. Freelancers, skip the coffee shop and work from your kitchen table. Moms and dads, rush from school drop-offs and birthday parties. Adult ed classes should be taken online. If your kids play sports, stand alone on the sidelines, ideally sending e-mails.

And don’t forget to frown!

Or . . . if you want to make friends as an adult, emulate George Costanza in Seinfeld’s “The Opposite” episode and do the opposite of what your instincts are telling you.

That sounds so simple, but making friends as an adult can be hard. Like losing weight, it takes time — but should be a lot more fun.

“Making friends as an adult requires two main actions,” says relationship expert and author David Bennett : “Getting around the same people regularly and purposely being open to friendships. 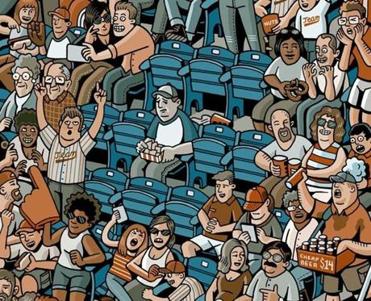 As men grow older, they tend to let their friendships lapse. But there’s still time to do something about it.

A recent study showed it took around 50 hours just to become a casual friends, he said, and about 200 hours to think of a person as a close friend. That’s the kind of time you can rack up naturally as a kid or a college student, but harder to put in the time when life’s responsibilities grow.

But what if you don’t have 50 hours to spare — or any hours?

Sandi Haustein, a blogger at The Welcoming Table , a friendship site, says she’s heard so many people say that they don’t have time for friendships and yet connections and relationships are what they crave.

“If you really want to make friends,” she says, “you have to purposely create margin in your life so you have the time and energy to put into friendships. That means you might say no to any commitments on Thursday nights because you reserve that night for friends. Or if you’re a parent, you limit the amount of extracurricular activities your kids participate in so your family can invite people over for dinner regularly.”

But where are you meeting these people you’re clearing your schedule for?

Let’s start with at your workplace — and a word of caution. Take the initiative and introduce yourself to co-workers, eat lunch in the cafeteria, attend work events, and go out of your way to perform random acts of kindness to co-workers, says Justin Lavelle, chief communications director for PeopleLooker.com, an online background check platform.

“Once you feel ready, ask your coworkers if they would like to hang out after work sometime,” he said, but “be careful to not force friendship on someone. Otherwise, you may steer them away.”

And if you don’t work, or even if you do, there are other friend hunting grounds, according to Alison Bernstein, founder of Suburban Jungle a real estate firm exclusively focused on buyers leaving the city for the suburbs.

Take a group fitness class, join a running or biking group, volunteer, or get a dog, she says.

The dog is supposed to introduce you to pals at the dog park or on a walk, but the dog can of course also be your friend. As a line (perhaps wrongly) attributed to President Harry Truman goes “If you want a friend in Washington, get a dog.”

Then of course there are kids — your “entry way” to meeting new friends, Bernstein said. Take them to classes, local family events, troll for mom dates at the playground.

If your child is still a baby, meaning you are exhausted and somehow ridiculously busy, try the Peanut app. Its motto is: “Meet as Mammas. Connect as Women,” and as new mom Melissa Boyle, 37, of Watertown, described it, it takes the awkwardness out of meeting in person.

“If you go to [post-natal] yoga class, you don’t know if those women are there to have their ‘me time’ or they might be open to making new friends,” she said. “You don’t want to be a creep if they are trying to get their zen on.”

Meanwhile, as you go on your friend-making rounds, make sure to choose wisely. There are Oscar Wilde style pals: “A true friend,” he said, “is one who stabs you in the front.”

And others — perhaps more desirable — in the Mr. Rogers mode: “When people like each other and like to do things together,” he said, “they’re friends.”