By Thanassis Cambanis The Internationalist  February 16, 2018

International peace and security is built on rickety compromises. Look around the world at the many places where bitter, deadly conflict has ground to a halt, and you’ll find a series of Rube Goldberg contraptions — fragile, elaborate workarounds, not pat solutions.

The world is a messy place, and foreign affairs magnify human complexity. Americans have long dreamed of simplifying and unifying the world, bringing it in harmony with their values and principles. The impulse is to wade in and resolve things, even if it means breaking up a status quo that functions, with only a vague hope that something better can come of it.

President Trump has renewed interest in upending the world’s status quo. He questioned old chestnuts like the usefulness of NATO, and has reshaped the American approach to Iran, North Korea, and the Palestinians. This year, he dramatically slashed funding to the United Nations agency that since 1948 has been taking care of Palestinian refugees, today numbering in the millions. He has made clear that he’s willing to consider war with Iran. And facing a North Korean leader armed with nuclear missiles, he’s taken a combative approach that scorns the traditional mores of containment.

A close look at some of the most dangerous spots in the world suggests that the United States would do far better if it embraced limbo. Whether the issue is Palestinian refugees, Iran’s nuclear program, or North Korea’s missiles, a messy bad deal is probably the best option. We tend to use the language of avoidance to describe the workarounds that manage long-burning crises — we’re kicking the can down the road, burying our head in the sand, delaying an inevitable moment of reckoning. But what if, in most cases, kicking the can down the road is the only kind of solution that exists, while a more ambitious approach guarantees nothing but more violence and instability?

The North Korea case reminds us just how important these messy deals are for managing the world. The status quo on the peninsula calls into play a bewildering number of governments, interests, and individuals. In the past, the United States has provided aid to North Korea in order to essentially bribe it to slow down its nuclear and missile programs, while China has maintained a tenuous alliance with Pyongyang, on the grounds that it’s wise to keep your friends close and your enemies closer. Kim Jong-Un in a few short years upended this fragile equilibrium and now, once again, world powers are debating how to avoid a nuclear war. 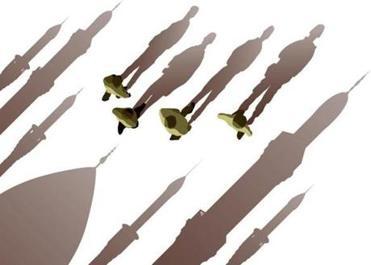 US military should get out of the Middle East

A military withdrawal is by far the safest path for the United States and the region.

Could we have avoided today’s crisis had world powers been more willing to push for a total solution at some earlier point, 20 or 50 years ago? In fact, the dynamics of international compromise suggest the exact opposite — the more we embrace sloppy status quo deals, the more peace and stability we can enjoy.

America, with its enduring strain of internationalist idealism, imagines itself as a moral knight in a world without values. Other powers are often content to maximize profits in an unjust world order, but Americans like to think their country is willing to forfeit cold interests when they conflict with cherished values. As a result, Washington’s biggest contributions to the world have come from its willingness to radically remake the status quo, supporting a wave of nationalist self-determination a year ago, promoting liberalism and capitalism, and trying to force pragmatic states around the world to adopt certain principles on human rights and trade.

Experience, however, suggests that this quest for solutions is most of the time wrongheaded. Reformers of global politics claim that we face a choice between painful-but-necessary revolutions and untenable jury-rigged compromises in places like the Korean peninsula and the Middle East. But with the exception of rare historical pivot points, the choice is between conflict or tension, on the one hand, and a middling, problematic compromise, on the other. The clean, neat solution is a chimera.

The specific game-changers that Trump appears to be considering from North Korea to the Middle East are alarming, but this approach isn’t new — and the destabilizing results are easily predictable. Presidents Bill Clinton and George W. Bush also believed that America’s exceptional values and economy enabled it to change the way the world functioned. They caused untold damage along the way to figuring out they were wrong.

Clinton believed that after the collapse of the Soviet Union, the remnants of a former superpower would embrace Western ways and American dominance. He missed a historic chance to engage with Russia as a major power, instead trying to transform it into an investment opportunity. Out of that misstep came Putin and another era of conflict between Russia and the West.

George W. Bush took misguided American problem-solving a step further after Sept. 11, causing damage that still reverberates today. After invading Afghanistan, Bush chose to overthrow Saddam Hussein and occupy Iraq, convinced he could remake the Middle East as a model democracy. Bush’s war of choice turned a weakened dictatorship that no longer posed threats beyond its borders into the Iraq we’ve known since 2003 — a deadly place for its own residents and an exporter of instability and extremism.

Iraq is the most striking recent example of what can happen when America tries to fix a cruddy compromise. After the Gulf War of 1991, Saddam Hussein remained in power as a diminished but still awful tyrant. He murdered Kurds, Shiites, and other dissenters. His country declined deeper into poverty and dysfunction. He made unnerving threats. Yet he was kept in check by international sanctions and by an ongoing low-grade war — the “no-fly zone” that protected the autonomous Kurdish enclave in Iraq’s north and quashed any hopes Saddam harbored of reemerging as a regional strongman.

This was a costly and problematic fix. It irritated many of Washington’s allies in the Middle East, and it didn’t fully quiet the fears of Iraq’s neighbors. It left an unjust order in place inside Iraq, thwarting the aspirations of its citizens. It encouraged oil smuggling and international corruption. It kept the United States mired in a perpetual maintenance war.

The specific game-changers that Trump appears to be considering from North Korea to the Middle East are alarming, but this approach isn’t new.

It was no surprise that many Iraqi dissidents supported the war of 2003. So did some Western humanitarians and democracy promoters. They failed to appreciate just how much worse their solution was than the original problem.

Paradigm shifts exert a powerful appeal. We don’t like the way the world works, and imagine that if we’re willing to dream up a completely new approach, we can make the world better. Americans are especially prone to this kind of thinking in foreign affairs, because presidents tend to tune in and then tune out every few years, meaning they bring fresh (and often ignorant) eyes to legacy problems.

Sometimes the results are laudable — like the idea, hatched in the 1990s, that the United States and other powers could sometimes use their militaries to stop genocide.

For the most part, though, the approach is dangerous. Awful status quo compromises might make no sense at first glance, but they’ve usually emerged from struggle and negotiation; they’re not accidents. There’s often no reason to break the logjam and create new (often worse) possibilities.

Magical thinking endangers any meddling power, not just the United States. In Syria’s messy war, it’s Russia (and to a lesser extent Turkey and Iran) that have set unrealistic targets of total control or transformation — and who are now mired in an international proxy war with dangerous risks of escalation.

Trump, egged on by Benjamin Netanyahu’s government in Israel, now appears to believe that squeezing the Palestinian refugee agency will create new opportunities for Arab-Israeli peace talks. Trump also, apparently, hopes to catalyze some change to the limbo of nearly 5.5 million stateless Palestinian refugees who have been living in the Middle East since 1948. On its face, the existing setup seems crazy. World powers set up the United Nations Relief and Works Agency, in 1948 as a temporary salve to the refugee crisis caused by the first Arab-Israeli war. Neighboring Arab countries did not want to integrate Palestinian refuges, for fear that would dilute the refugees’ right to return. Wars and waves of displacement followed. Today’s shaky compromise pleases virtually no one, but provides stability to millions of Palestinians, while reducing the risk of yet another regional war. Closing the relief agency or pressuring Israel’s neighbors might sound like it could prompt bold negotiations — yet it’s all but guaranteed to spur conflict and lead right back to the existing, crummy-but-viable status quo solution.

Of course, there is value in dreaming big. But to achieve big idealistic goals requires a series of small, muddled, and compromised steps. The most unlikely international successes of our time are deeply flawed, and came about through a series of profoundly unsatisfying, compromised stages. The United Nations failed to stop all wars, yet it has undeniably made the world a significantly less deadly and more stable place, even though it has been party to the profoundly compromised ways of international deal making. The European Union stemmed from a similar stream of compromises: The biggest and most successful experiment in world history of people voluntarily uniting and sharing power, the EU has faced justifiable accusations of being insufficiently democratic at each stage .

In the messy and deadly arena of world politics, workarounds aren’t always great outcomes. Most of the time, however, they’re the best alternative. Fix them at your peril.

Thanassis Cambanis, a senior fellow at The Century Foundation, is the author of “Once Upon a Revolution: An Egyptian Story.” He is an Ideas columnist and blogs at thanassiscambanis.com.
Loading comments...
Most Popular in ideas
Real journalists. Real journalism. Subscribe to The Boston Globe today.