The Commerce Department said Friday that the US economy grew at an annualized rate of 3.5 percent in the third quarter, buoyed by the high pace of consumer spending and a build-up of business inventories (as businesses prepare to meet future consumer spending.)

This marks the second straight quarter of high-powered growth, after the 4.2 percent expansion between April and June. And should this pace continue through December, 2018 will be feted as the strongest year for the US economy since the financial crisis.

Yet, even broadly positive reports like this one come with caveats.

The trade deficit continued to widen through September, with imports outpacing exports. That’s not great for US manufacturing, and it suggests that President Trump’s trade war isn’t working. But there’s a flip side, too. When shoppers snatch up affordable imports, that boosts consumer spending, which is central to our overall recovery. 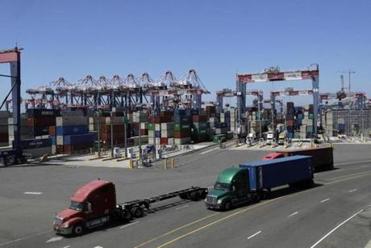 The US economy grew at a robust annual rate of 3.5 percent in the July-September quarter as the strongest burst of consumer spending in nearly four years helped offset a sharp drag from trade.

Separately, neither businesses nor homeowners did very much investing in the third quarter. Part of that was expected, as separate reports had shown a sharp decline in home sales. But the anemic pace of business investment remains a surprise.

The report wasn’t enough to cheer Wall Street, where investors are focused on disappointing financial results from tech companies including Google and Amazon. The Standard & Poor’s 500 was down 1.4 percent in morning trading, while the Dow fell almost 1 percent.

The grand idea behind the corporate tax cut Republicans passed in January was that shrinking tax bills would leave businesses with more money to spend on new machines, new buildings, and other productivity upgrades. But this anticipated spending spike just hasn’t materialized. Between July and September, overall business investment increased at an annual rate of 0.8 percent, the slowest pace in nearly two years.

And then there’s the overarching question: Is this heightened pace of growth really sustainable, or will it fade as the US deficit rises and the Federal Reserve hikes interest rates?

Consider this an early warning sign: While consumer spending was the main driver of the just-ended quarter’s success, increasing a hefty 4.0 percent, incomes grew only 2.5 percent. That’s not a recipe for long-term success. At some point, incomes have to catch up with spending — or spending has to catch down.

Still, it’s important not to exaggerate these kinds of concerns. The GDP report was a shiny silver cloud with a thin dark lining — not the other way around. Ten years after the Great Recession, the great American Recovery isn’t just continuing; it’s improving.

Evan Horowitz digs through data to find information that illuminates the policy issues facing Massachusetts and the US. He can be reached at evan.horowitz@ globe.com.
Loading comments...
Most Popular in business
Real journalists. Real journalism. Subscribe to The Boston Globe today.