The Baker administration said Tuesday that it’s spending $20 million to bring Amazon, and 2,000 jobs, to a new building at Seaport Square.

It’s money that the project’s developer, Chestnut Hill-based WS Development, had last year agreed to spend on transportation improvements as part of city and state permitting for Seaport Square, a massive mixed-use development being built in the Seaport District.

The $20 million will instead come out of the state’s coffers, with the savings, along with a $5 million property tax break from the city, probably being passed along to Amazon in the form of lower rent.

As corporate subsidies go it’s substantial, but smaller than some recent ones offered to other companies.

GE, for instance, got $150 million in state and local incentives for its promise to bring 800 new jobs to nearby Fort Point. MassMutual will receive $46 million in tax credits to add 2,200 jobs in Springfield and Boston. 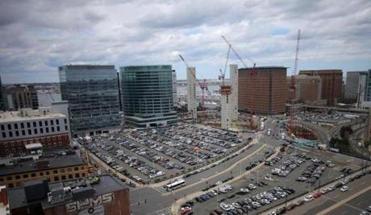 Amazon confirmed it plans to hire 2,000 employees at a new facility in Seaport Square that will focus largely on developing its Alexa voice-activated technology.

But the Amazon funding deal came as a bit of a surprise. It wasn’t approved by any state boards or mentioned in Tuesday’s press releases announcing the expansion. The arrangement was negotiated between the state, Amazon, and WS Development as part of lease discussions over the past few months. It was mentioned only after queries from the Globe about whether Amazon would receive any state incentives.

On Wednesday, state officials shared a “commitment letter” that was signed last month by Economic Development Secretary Jay Ash and Transportation Secretary Stephanie Pollack. The letter answered some questions about the financing but raised others. Here’s what we learned from the fine print:

In this case, a new entryway to the MBTA’s Silver Line, bike lanes, and valves designed to keep water from Boston Harbor from flowing up through the sewers onto Seaport District streets when there are high seas (a problem during this past winter’s storms).

WS is still on the hook for making improvements to Seaport Boulevard, as well as for $2 million for the design of a new Northern Avenue Bridge, funding for ferry service to the Seaport, and a study of the Silver Line’s passenger capacity.

According to a list of “potential infrastructure projects,” the state money would be doled out this way:

■■ $12.5 million for a new entryway to the Silver Line’s Courthouse Station, on Seaport Boulevard near District Hall.

■■ $2.5 million for bike lanes, sidewalks, and stormwater protection on Boston Wharf Road and the East and West service roads, which cross the project between Seaport Boulevard and Summer Street.

Where does the money come from?

It will be disbursed through Ash’s Office of Housing and Economic Development, which oversees the MassWorks infrastructure program and other funds designed to drive job creation.

The Department of Transportation and the Massachusetts Bay Transportation Authority will do the work. Any costs beyond $20 million are the responsibility of WS.

What does Amazon have to do?

Create jobs. Under terms of the deal, the tech giant, which currently is advertising nearly 500 open jobs in Cambridge and Boston, must add and maintain 2,900 full-time “corporate office” jobs in Boston, Cambridge, and at a camera company it recently purchased in Andover.

That figure includes the 2,000 jobs planned at Seaport Square and 900 at a newly opened office in Fort Point. If by 2030 Amazon has fewer than 2,900 employees in those places, it will have to pay back some of the $20 million. How much depends on how many people the company employs.

What does Amazon get out of this?

Bike lanes. But also, presumably, a break on rent. The $20 million WS is saving, along with the $5 million city tax break, will probably be passed on to Amazon in the form of lower rent, according to people familiar with the deal.

The company is signing a long-term lease on 430,000 square feet of office space, in a part of the city where top-end buildings rent for $70 a year per square foot, or more. So even $25 million goes only so far. But for a penny-pinching retailer, every dollar counts.

The state has a variety of economic development incentive programs, but recouping the cost of public benefits already agreed to by a private developer is a new approach.

It could be a model for how the state will approach incentives on the much bigger deal for Amazon’s second headquarters.

Governor Charlie Baker and Boston Mayor Martin J. Walsh have shied away from the billion-dollar tax breaks some other states are dangling, suggesting that any subsidy to Amazon would consist largely of investment — in transportation or public education — that would benefit all Bostonians. The Seaport deal is the sort of move that might qualify — after all, Amazonians won’t be the only people using those bike lanes.

But to win HQ2, it’s a safe bet the number is going to have to be a lot bigger than $20 million.