“Hadestown,’’ the creation of singer-songwriter and Vermont native Anaïs Mitchell, led the field when Tony Award nominations were announced Tuesday, garnering a total of 14, including one for best musical.

It was a remarkable haul for “Hadestown’’ and for Mitchell, who grew up on a sheep farm near Middlebury. She was nominated for best book and best original score for her work on “Hadestown,’’ and director Rachel Chavkin earned a nod in the category of best director. Eva Noblezada and Amber Gray were nominated for best lead actress in a musical and best featured actress in a musical, respectively, for their performances in “Hadestown,’’ and André De Shields was nominated in the category of best featured actor in a musical.

A reimagining of the Greek myth of Orpheus and Eurydice in which the underworld is a depressed factory town, “Hadestown’’ has had a long and varied journey. After debuting an early version of the work in Barre, Vt., in 2006, Mitchell released “Hadestown’’ as a concept album in 2010. Developed into a full-fledged musical, it had an acclaimed run off-Broadway in 2016, was presented last November at London’s National Theatre, and then opened on April 17.

In second place with 12 Tony nominations, including one for best musical, is “Ain’t Too Proud: The Life and Times of the Temptations,’’ a jukebox musical that tracks the rise of the fabled R&B group, followed by “Tootsie,’’ an adaptation of the 1982 film about an actor who dresses as a woman to land an acting role, which received 11, including for best musical.

There were several notable snubs. Glenda Jackson was not nominated for her performance in “King Lear,’’ and “To Kill a Mockingbird,’’ “Network,’’ and “Hillary and Clinton’’ were all left out in the best play category. 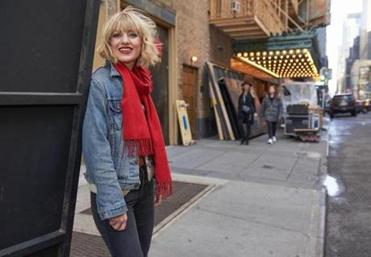 From the archives: A folk opera from Vermont heads to Broadway

Anaïs Mitchell grew up on a sheep farm in Vermont. Now her musical “Hadestown” is headed for theater’s brightest lights.

Nominated instead for best play were Jez Butterworth’s “The Ferryman,’’ a drama that explores the impact of “The Troubles’’ on a family in Northern Ireland, which received a total of nine nominations; Heidi Schreck’s “What the Constitution Means to Me,’’ which examines the history of violence against women and the contradictions and omissions of the nation’s founding document; Tarell Alvin McCraney’s “Choir Boy,’’ a play about race, sexuality and identity that is set at a boys’ prep school; Taylor Mac’s “Gary: A Sequel to Titus Andronicus,’’ a comedy set in 400 B.C. in which two servants are charged with cleaning up the bodies in a world gone mad; and James Graham’s “Ink,’’ inspired by media magnate Rupert Murdoch.

Competing with “Hadestown,’’ “Ain’t Too Proud,’’ and “Tootsie’’ in the best musical category are “Beetlejuice,’’ a musical adaptation of the 1988 Tim Burton film, in which the titular poltergeist causes mayhem in a home occupied by a living family and a recently deceased family; and “The Prom,’’ a musical comedy about a group of Broadway performers who champion the cause of an Indiana high school student prohibited from bringing her girlfriend to the prom.

Musical revivals were scarce on Broadway this season, as evidenced by the fact that there were only two nominees: “Oklahoma!’’ and “Kiss Me, Kate.’’ The nominees for best revival of a play are Arthur Miller’s “All My Sons,’’ Lanford Wilson’s “Burn This,’’ Kenneth Lonergan’s “The Waverly Gallery,’’ Harvey Fierstein’s “Torch Song,’’ and Mart Crowley’s “The Boys in the Band.’’

Chavkin, who helmed “Natasha, Pierre, and The Great Comet of 1812,’’ is slated to direct a musical adaptation of “Moby-Dick’’ by “Natasha, Pierre’’ creator Dave Malloy this December at Cambridge’s American Repertory Theater.

The nominees for best lead actor in a play are Jeff Daniels for “To Kill a Mockingbird’’; Bryan Cranston for “Network’’; Adam Driver for “Burn This’’; Paddy Considine for “The Ferryman’’; and Jeremy Pope for “Choir Boy.” (In a rarity, Pope was also nominated as best featured actor in a musical for his performance as Eddie Kendricks in “Ain’t Too Proud.’’) Vying for best lead actress in a play will be Annette Bening for “All My Sons’’; Elaine May for “The Waverly Gallery’’; Laurie Metcalf for “Hillary and Clinton’’; Heidi Schreck for “What the Constitution Means to Me’’; Janet McTeer for “Bernhardt/Hamlet’’; and Laura Donnelly for “The Ferryman.’’

Only Broadway productions are eligible for Tony Awards, which feature 26 competitive categories and are presented by the American Theatre Wing, a nonprofit organization, and the Broadway League, the trade association of theater owners and producers. The 73rd Annual Tony Awards are scheduled to be broadcast live on CBS on June 9, hosted by James Corden. The nominations were announced Tuesday morning on CBS by actors Brandon Victor Dixon and Bebe Neuwirth.

Don Aucoin can be reached at aucoin@globe.com. Follow him on Twitter@GlobeAucoin
Loading comments...
Most Popular in arts
Real journalists. Real journalism. Subscribe to The Boston Globe today.