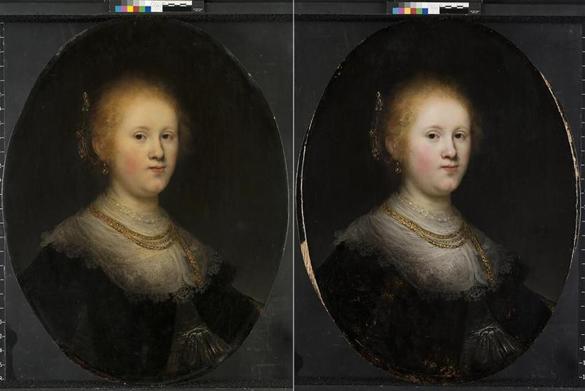 Museum’s Rembrandt knockoff turns out to be the real thing

Thanks to modern technology and some expert detective work, a nearly 400-year-old painting that had long been attributed to an unknown artist in Rembrandt’s workshop has now been judged to have been a work of the Dutch master himself.

In a city where something is always for sale, where can we check out?

Walking around Boston these days, from the Museum of Science to the Greenway and beyond, it can start to feel like someone is always trying to sell you something.

The Museum of Science ranks among the best in the nation. The accolades don’t come without turmoil

The museum is embarking on a 10-year renovation plan despite its lack of a president, employee discontent, and the challenges of museum management.

The painting, discovered earlier this year, was attributed to the 13th-century Italian painter Cimabue.

Fuller Craft Museum’s new exhibit is a barrel of monkeys

Monkeys are taking over a gallery at the Fuller Craft Museum, starting Feb. 15, for an exhibit called “The Great Monkey Project.”

After years of doubts about its authenticity, specialists in Amsterdam have confirmed that a Vincent van Gogh self-portrait was indeed painted by the Dutch master.

Heirs hope a deal with Getty Images will promote the photographer’s later and lesser known works.

At Anthony Greaney, an installation built from shards of childhood memories

The collaborative work is woven with colors, photos, and designs representing the artists’ very different histories.

The enormous piece is packed with detail and art history references.

What makes choreographing Cohen easy is that his music usually has a strong dance pulse. What makes it hard is that his lyrics often go where bodies can scarcely follow.

Slime, the bedazzled, stretchy sensation that has spawned its own social media influencers and fans of all ages, is taking up residence in New York City.

At Gallery 263, colorful art made from Post-Its, pens, and paper clips

At the Davis Museum, the late Kanishka Raja’s kaleidoscopic visions of East and West

The museum offers a deeper look at an artist who crisscrossed boundaries.

He has been named chief curator of American art at the Huntington Library, Art Museum, and Botanical Gardens, in San Marino, Calif.

The celebrated street artist returns to his artistic birthplace to paint his 100th mural, open an art retrospective, and speak at his alma mater, the Rhode Island School of Design.

Artist Savanna Nelson loves her colors to be bright and fluorescent

A recent graduate of the Massachusetts College of Art and Design, Nelson majored in painting and art history, two fields of study that have fueled her creative process.

At the new MoMA, African Americans and women get better play... but hopefully there’s more to come

The legendary museum cut a narrow line through art history. It now cuts a broader swath, with more to come.

The Weekender: SpongeBob sings, Almodóvar returns, and Holzer takes over

The Globe's picks for the best ways to spend your weekend.

At the deCordova museum, finding nature and artifice in ‘All the Marvelous Surfaces’ photography show

Karl Blossfeldt’s plant studies are the launching point for the new show.

The concert scene is better than ever at the state’s largest art museums.

Light and shadow move through this gorgeous installation at Krakow Witkin Gallery.

Things to do in Greater Boston this fall and winter

Your seasonal calendar of events, music, theater, and more.

From Edward Gorey to Norman Rockwell, individual artists are soloists and stars at these small museums.

Lisa Tung envisioned a museum on the grounds of MassArt, a place to train a new generation of museum professionals.

At the Gardner Museum, seven favorites from 25 years of artists-in-residence

“In the Company of Artists” celebrates the museum’s residency program with an exhibition of highlights.

‘I felt it wasn’t good enough’: In her 90s, a Massachusetts artist is finally ready for her first solo show

It took a lifetime to convince Avital Sagalyn to share her work.

The Weekender: Global grifters, the other Schumann, and ‘The Lion King’

Museums have watched their relevance wane for decades as the world shifted around them. With various culture wars raging, the MFA’s 150th anniversary brings the chance to reengage.

Báez will create an architectural sculpture that imagines ancient ruins below the venue.

The Louvre opened a new sprawling art conservation center Tuesday some 120 miles from Paris to protect the museum’s priceless artworks from its flood-prone storage reserves.

Gregory Ruffer stepped down following allegations of inappropriate conduct while he worked as a professor at a Florida college years ago, according to the center’s board of directors Sunday.

Gallagher’s paintings are case studies in color, texture, and experimentation.

The quintessential American artist cut his teeth as a Civil War illustrator, but did he ever really move on?

Gordon Matta-Clark left an outsize legacy by dismantling buildings around the world.

Shepard Fairey returns to Providence — and RISD — this month

Some giant news in the contemporary art world: Acclaimed street artist Shepard Fairey, who got his start at the Rhode Island School of Design, returns to Providence this month where he’ll paint his 100th mural.

The museum is responding with a daily release of first-come, first-serve tickets.

At the Boston Athenaeum, a 17th-century book collection makes you think: Which titles matter most today?

The Boston Athenaeum solicited libraries of essential reading for the 21st-century.

The traveling show inspires a viewer to rethink history and ecology.

A local blogger is just one enthusiast documenting the faded advertisements that dot buildings around the city.

At the start of his career over 30 years ago, Jim Kociuba was the only art teacher in New Hampshire’s Hopkinton school district. Now retired, he’s focusing on his own art.

Ahead of the opening of the Edward M. Kennedy Institute for the United States Senate, the Globe Magazine explores the history of the project and Kennedy’s vision for it.

An in-depth look at the new complex designed by architect Renzo Piano.