Andrew Luck’s surprising retirement at age 29 is a hot topic in the sports world, and he is a player of stature. With Luck at quarterback, the Indianapolis Colts were regarded as a legitimate Super Bowl contender. Now? Uh-uh.

He is a big name, for sure, but we have been down this road before. As good as Luck was, he is hardly the biggest name to make the decision to cease playing before what we would consider his time.

Five and a half decades after his final game with the Cleveland Browns, Brown remains the gold standard, the running back with which all subsequent ball carriers have been measured. He played nine seasons (never missing a game) and led the league in rushing eight times, including his last season, when he averaged his typical 5.3 yards per carry. He was a three-time MVP and eight-time first-team All-Pro. A 2002 Sporting News poll identified him as “The Greatest Professional Football Player Ever.” He was one of the greatest all-around athletes America has ever produced, having lettered in football, basketball, and track and field at Syracuse, while establishing himself as a true lacrosse legend. 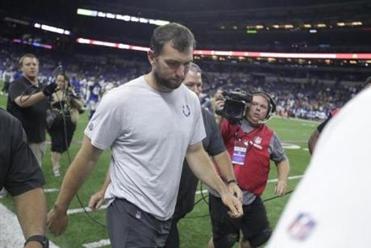 The disappointment of fans was understandable, but taking it out on Luck in that manner was unacceptable.

Brown had an acting itch, and in the summer of 1966 he was making a film called “The Dirty Dozen.” But there were production delays, and he was not going to be able to report to Browns training camp on time. He was in the second year of a two-year contract paying him $60,000 per season, and he had told Browns owner Art Modell that in all likelihood 1966 would be his final season before becoming a full-time actor. Modell was not pleased with Brown’s absence from camp and said he would be fined $1,500 for every week he was not in training camp. Making a long story short, Brown declared that if that were the case he was going to retire right then and there. Brown wrote Modell a letter in which he said, “I have many problems to solve at this time, and I’m sure you know a lot of them, so if we weigh the solution properly the Browns really have nothing to lose, but Jim Brown has a lot to lose.”

Well, the Browns certainly did have something to lose, and so did both the NFL itself and sports fans everywhere. The greatest running back the world had ever seen was walking away from the sport at the top of his game.

By the way, I can still see Jim Brown as Robert Jefferson running atop a rooftop dropping grenades down the chute at unsuspecting Nazi officers. “The Dirty Dozen” is a hell of a film.

Speaking of gold standards, say hello to the greatest lefthanded pitcher in history. But it was goodbye forever at the conclusion of the 1966 baseball season when Koufax announced to the world that he needed to retire because of an arthritic pitching elbow. Any infirmity undoubtedly came as news to the National League batters since Koufax was coming off a season in which he had won his third pitching Triple Crown (wins, ERA, strikeouts) in four years and had thrown 323 innings, or 12⅔ fewer innings than he had thrown the year before (yes, those numbers are correct).

Koufax had come off the campus of the University of Cincinnati, where he had been on basketball scholarship, and gone directly to the big leagues because of the existing Bonus Baby rule. It took him six years to figure things out (a 36-40 record), but once he did, he was nothing less than a megastar, compiling a 129-47 record from 1961-66 while throwing four no-hitters, the last of which was a perfect game in Wrigley Field.

Back to that final year for a second. It was, arguably, the greatest farewell regular season ever, in any sport. Koufax was 27-9 with a 1.73 ERA to go with 317 strikeouts and 27 complete games. So imagine the shock when the world found out it had been done with an elbow that was so messed up he felt he could no longer continue to pitch.

“To take a [cortisone] shot every other ballgame is more than I wanted to do,” he explained, “and to walk around with a constant upset stomach because of the pills and to be high half the time during a ballgame because you’re taking painkillers; I don’t want to have to do that.”

Jim Brown could run around you, but he was better known for running over you. Barry Sanders was utterly mercurial. Good luck trying to catch him.

He had four rushing titles in his 10 seasons. He was a six-time first-team All-Pro and a four-time second-team selection. He was the league MVP in 1997, when he ran for 2,053 yards. An NFL Network poll chose him as the “most elusive” running back in history.

Sanders was healthy, and he was within 1,457 yards of supplanting Walter Payton as the NFL’s all-time leading rusher when he quit following the 1998 season.

The reason was kind of vague, but Sanders had always been secretive. Think Kawhi Leonard. Sanders played cat and mouse with Lions coach Bobby Ross in the 1998-99 offseason before faxing his retirement to his hometown newspaper, the Wichita Eagle.

Sanders would later intimate that the Lions had simply failed him. He was part of just four winning teams in those 10 years and, of course, he never won a playoff game, let alone a Super Bowl.

Just this past summer he allowed that, while his retirement process had been “clumsy,” the Lions had to answer for “letting quality players slip away.” He went on to say that “we’d been losing for years, and now [1999] we were back where we were when I arrived.”

Here were three major, major, major stars, each with a different reason for stepping away while we were eager to see more. Andrew Luck should be honored to be involved in this discussion.

Bob Ryan’s column appears regularly in the Globe. He can be reached at ryan@globe.com.
Loading comments...
Most Popular in sports
Real journalists. Real journalism. Subscribe to The Boston Globe today.