The best hockey forward at the 2018 PyeongChang Olympics was a Swiss teenager named Alina Mueller. Her team didn’t win a medal, didn’t even qualify for the medal round, but Mueller scored four goals in her first game against Korea, went on to pile up 10 points in six games, and was named both best forward and a member of the Olympic All-Star team.

Now she’s over on Huntington Avenue at Northeastern, alternately scoring goals and setting them up as she leads the third-ranked Huskies (23-5-5, 21-3-3 Hockey East) into the Hockey East tournament and a quarterfinal matchup with Vermont (10-18-6, 8-15-4) starting Friday.

“I still say I got best player because I got the most points,” Mueller said with that peculiar brand of humility that seems to be at the core of most hockey players. “I would never say I’m the best forward.

“I want to be the best where I can, of course. I like it if the team counts on me or the coach puts you on the ice because they think you can score now or you can make the difference. That’s pretty cool.”

Mueller is more than just a smart player: She has a wicked shot, jets on her skates, and an abiding desire to play the game. 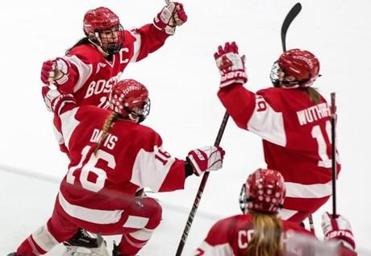 Northeastern comes into the conference tournament as the top seed and the third-ranked team in the nation.

“The amazing thing about her is she logs a ton of minutes for us and she actually gets stronger as the game goes on,’’ said Northeastern coach Dave Flint. “I’ve never seen anybody not tire out like her. She’s got one gear and she’s going strong in the third period. It’s really impressive.”

Now 20, the freshman center has set a commanding pace in her first season of collegiate hockey, averaging 1.4 points per game to rank eighth in the nation. She has 19 goals and 29 assists for 48 points, tied for sixth in the nation.

She brings speed, savvy, and strength to her game, able to take a breakout pass and deftly sidestep one defender, and then another, as she pushes inexorably toward goal.

Sometimes when she is deliberately coasting through the offensive zone, she seems to be thinking, sorting through the possibilities, figuring out the next move, where to pass, which space to move into. Other times she is directing teammates, extending her stick to point them in the right direction. She takes the point on the power play and is a presence on the penalty kill.

In a recent game, while she was tucked in the lower left corner of the zone on the power play, she was able to make a goal happen by receiving a cross-zone pass and immediately spotting an open teammate in the slot for a one-timer.

“She’s just so smart,’’ said Hockey East commissioner Joe Bertagna. “You watch her play, and if someone says, ‘Guess what year she is?’, you wouldn’t say freshman.

“She just carries herself with poise and experience. She’s obviously very skilled and sees the ice.”

Mueller has notched at least a point in 29 of 33 games, including points in all 10 contests against ranked opponents. Among her best efforts: She scored two goals and added an assist in a 5-4 win over No. 4 Boston College on Nov. 27, and collected 3 points in two games against No. 5 Clarkson.

She has picked up a cavalcade of weekly and monthly honors, and last week was named a top-10 finalist for the Patty Kazmaier Award as the nation’s top collegiate player.

“She’s a complete player and on top of that she’s a model teammate,’’ said Flint. “Puts the team first and wants the team to do well.

“When you congratulate her because she won another player of the week award or rookie of the week, she’s very bashful about that stuff, doesn’t necessarily like the spotlight. She’d rather have it be on her teammates and her team.

“But she’s a kid who has all the tools. And a hockey mind to go with it. She’s very impressive.”

Mueller’s international credentials also include the Sochi Olympics in 2014, when she was all of 15 — the youngest competitor at the Games — and scored the winner in Switzerland’s bronze medal upset of Sweden. She played youth hockey with the EHC Winterthur boys’ team until she was 17, then skated for a year with the Zurich Lions of the six-team women’s league.

“One thing that really developed her game for her was playing with the boys as long as she did,’’ said Flint. “It just forces you to play faster, play stronger, have better skills, because if you don’t adapt, you don’t get to touch the puck too much.’’

That background has also earned her a few extra penalties, as her play in the corners can sometimes be too vigorous for the women’s game.

“I like to battle in the corners,’’ she said. “It’s kind of bad and I still take penalties because I use my body too hard.’’

Mueller came to Northeastern for the many resources it offered — she expects to concentrate in behavioral neuroscience — and because she had seen national teammates and her brother (Mirco Mueller of the New Jersey Devils) take successful paths to North America.

Placed on a line with another freshman, Chloe Aurard from France, who is also her roommate, and team captain Kasidy Anderson, Muller found her comfort zone immediately.

“She’s a very shifty player, so she can get away from competition pretty easily,’’ Anderson said. “Just watching her, you can see how much other teams respect her. She can be right against the blue line and they know not to pinch off her — she’ll probably make them look silly.

Mueller came to Northeastern for the competition but said she is amazed by the locker rooms at Matthews Arena, and that the women’s hockey team has its very own. She is amazed by the weight room, too. She is continually stunned to be living the life of a professional athlete as a college freshman.

“It’s just every day is like a gift for me to be here,’’ Mueller said. “It’s unbelievable, and I try to use all the resources, try to make the best out of it for me.”

Barbara Matson can be reached at barbara.matson@globe.com
Loading comments...
Most Popular in sports
Real journalists. Real journalism. Subscribe to The Boston Globe today.