Sydney McLaughlin officially has been track’s next big thing since she qualified for the 2016 US Olympic team in the 400-meter hurdles as a 16-year-old.

McLaughlin is being positioned to be one of the biggest faces of the 2020 team. No more evidence is needed than her race at Saturday’s New Balance Indoor Grand Prix at Reggie Lewis Track and Athletic Center.

She will be running the 500 meters in the meet’s final event — the prime-time spot at 6:54 p.m. for the live NBCSN coverage.

After growing up in New Jersey, McLaughlin went to the University of Kentucky and is now transferring to a school in the Los Angeles area, where her coach lives and where she trains. And this weekend she is in Boston. 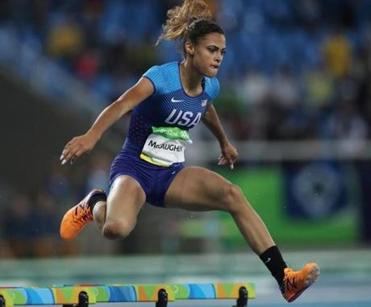 The event at the Reggie Lewis Center will be headlined by former Kentucky star Sydney McLaughlin.

At the Grand Prix news conference Friday at the Lenox Hotel, McLaughlin talked about running track at a basketball school, promoting women’s sports, and learning to navigate the pros and cons and traps of social media.

Q. Going into college already known as a world-class athlete, what has the college experience been like for you?

A. It was a lot more intense. Just the training as well as the expectations. . . . I think a lot of people don’t understand what college students have to do on a regular basis, and adding a D1 sport on top of that is overwhelming, to the point that it’s crazy to see how many people drop out of sports or have depression are actually really struggling.

It was intense to see what people go through, and I commend all of the student-athletes for what they go through, because it’s a lot.

Q. How do you deal with social media? Are you being guided and coached, or are you learning as you go?

A. Up until this point, it’s been on my own, for the most part, just watching and learning, a trial-and-error kind of thing. But now I do have people stepping in to help me with those kinds of things, who monitor and make sure. Not only engagements and here’s how to grow your social media, but also watching out for some of things that could be negatives in the future as well.

I think it’s going to get to a point once it reaches a certain height I will have to step away.

Q. How do you split the personal side with the public face on social media?

Q. With Kentucky being known as a basketball school, how did it feel to be a world-class athlete on what some would consider a second-tier sport?

A. I love being able to run track because I’m, in a sense, bringing awareness to it. We went into Kentucky and we weren’t a track school, you’re a basketball school, but last year we were able to make so much noise that people kind of looked at track more, and now they have a lot of people going there because of track.

It’s great to make people realize what we do is important. Whether it’s not important to them now, it will be. We have the Olympics and they only watch us once every four years, but now we are bringing people into the sport that are going to watch it more often.

Q. In the same vein of bringing more attention, what do you do to elevate women’s track and raise the sport’s profile?

A. I think Usain [Bolt] did such a great job of bringing people to the sport, but they focused on men when they did that. Allyson [Felix] and Sanya [Richards-Ross] have brought so many people to the sport for women, I just want to be able to continue that and help them realize that men run fast, but women run fast, too. It can be just as entertaining and just as fun.