NEWPORT, R.I. — Rearrange a few walls, create an open, user-friendly floor plan, order custom-built cabinetry, uncover and restore a trio of fireplaces, spruce up all of the family heirlooms, and top it off with new wiring, paint, lighting, and carpet.

Well, add in several state-of-the-art multimedia displays, including a hologram featuring a future Hall of Famer, and a multimillion-dollar budget, and you can call this Extreme Makeover: International Tennis Hall of Fame edition.

What started three years ago in the planning stages comes to fruition Wednesday at 11:30 a.m. when the Hall of Fame reopens its doors after six months with a ribbon-cutting ceremony to show off its $3 million project.

The goal of the redesign, the museum’s first since the late 1990s, was to create a cohesive story of the history of tennis and better personalize the 243 members of the Hall of Fame, said museum director Doug Stark. 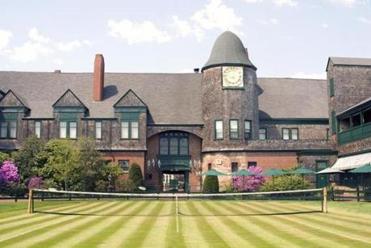 What you need to know about visiting the International Tennis Hall of Fame in Newport. R.I.

“We designed the exhibits in a way that people could participate in the learning process together,’’ Stark said. “We want to showcase our collection, introduce new technology, and also highlight the architecture of the building.”

A veteran visitor to the grounds noticed a change in the windows above the arched entry during a recent luncheon and tour.

“Yes,” said Stark with a smile. “For the first time in a long while, they’re clean.”

A lot of elbow grease went into refurbishing the former home of the Newport Casino, which opened its doors in 1880, became the home of the National Lawn Tennis Hall of Fame in 1954, and was recognized by the International Tennis Federation in 1986. In ’87, the building was designated as a national landmark.

Part of the museum’s challenge was making the best use of its 12,000 square feet of space.

“Because of the building’s national landmark designation, it’s not like we could just add a third floor,’’ said Anne Marie McLaughlin, the Hall’s director of marketing and communications.

The museum’s grand staircase entry and the Woolard Family Enshrinement Gallery, which pays tribute to the Hall of Famers through interactive kiosks, remain largely unchanged. The rest of the museum, though, received a complete facelift and is now broken down into three main areas: The Birth of Tennis (1874-1918), The Popular Game (1918-68), and The Open Era (1968-present).

About 1,900 pieces are now on display, compared with about 1,100-1,200 items in the previous design. McLaughlin said the museum has some 25,000 artifacts in its collection.

Every artifact on display received a new mounting and information card, and the cabinetry, which features drawers filled with programs, medals, ticket stubs, and even a tennis-themed Ken Doll from the 1960s, was built to match the existing woodwork.

“We want people to enjoy and touch,’’ Stark said.

Along with the history of the game and the on-court changes in technology, fashion and artwork are also a large part of the new displays.

The museum has two lithographs by American artist George Bellows, and an Andy Warhol work featuring Chris Evert that was completed in 1979. Dotted throughout the displays are shoes from Serena Williams and Andy Roddick, a Bjorn Borg outfit from 1976, and the “Sugar Daddy” windbreaker that Bobby Riggs wore when he faced Billie Jean King in the Battle of the Sexes match in 1973.

And no tennis fashion collection would be complete without an item from longtime Globe tennis writer and Hall of Famer Bud Collins (Class of ’94), and the Hall doesn’t disappoint with a pair of orange pants that feature two serpent-like creatures.

“We’ve tried to include something for everyone, even if they’re not a tennis fan,” Stark said. “We were looking for the most fun and interesting pieces to help make tennis more relevant for a worldwide audience.”

The biggest — and most expensive — additions were in the area of technology.

A unique addition is a 5-foot, touch-screen interactive table, where visitors can “serve” trivia questions at one another or learn about the personalities, fashion, and evolution of the game. Nearby is a “You Call The Shot” broadcast desk, where visitors can take on the behind-the-mike role of John McEnroe or Mary Carillo in recording their own call of a point.

The highlight of the redesign, though, is the holographic theater that features Roger Federer, the world’s No. 2-ranked men’s player.

“We talked about wanting to feature a current, international player, and Roger was a natural choice,” Stark said.

Federer quickly agreed, and the process started with a filming session in a warehouse in Dubai in mid-February. “I agreed to take one for the team,” chuckled Stark, who traveled to the UAE with a team from Cortina Productions.

In the eight-minute movie, in which a three-dimensional Federer appears to be swinging his racket at you just a few feet away, the 17-time Grand Slam champion shows a lighter side to his personality that weaves in old photos and home movies as he narrates the 10 reasons why he loves the game.

“We wanted a unique and memorable experience,” Stark said of the hologram, the first at a sports museum in the US.

The technology doesn’t end with the hologram, though. A large, rotating globe is another interactive exhibit that will highlight ongoing matches from around the world, and two live tickers in the other galleries also will keep visitors up-to-date on live matches.

While Wednesday’s ceremony is the museum’s icebreaker, it’s just the tip of the iceberg for the facility’s future. The three-year capital campaign has raised $14.8 million of its $15 million goal that also will result in a new indoor tennis facility, new office and retail space, and new grandstands in the Bill Talbert Center Court in 2015-16.

The Hall’s feature annual event is the induction ceremonies, and this year’s class is headed by former world No. 1 and two-time major winner Amelie Mauresmo. Joining Mauresmo for the July 18 festivities will be David Hall, a six-time Paralympic medalist, and Nancy Jeffett in the contributor category.

In conjunction with induction week, the grounds’ grass courts will play host to the Hall of Fame Tennis Championships from July 11-19. John Isner (No. 17) and Jack Sock (No. 36), the highest-ranking American men in the latest ATP rankings, are scheduled to play, along with 18-year-old Rhode Island native Jared Donaldson, at No. 156 the top American teenager in the rankings.

Marty Pantages can be reached at martin.pantages@globe.com.
Loading comments...
Most Popular in sports
Real journalists. Real journalism. Subscribe to The Boston Globe today.