Andrew Yang is a Democratic presidential candidate who likes to joke, even at his own expense, which is part of his charm. “I naturally think I see the humor in things,” he tells me. “I think it’s been good for the campaign that we occasionally enjoy a good laugh.”

He peppers his speeches with droll questions like this one: “How many of you were excited about GDP when you woke up this morning? Like: I’m going to make a big contribution today!”

So I’m having a little fun by springing an out-of-right-field question on him as we talk after his appearance at Politics & Eggs, the invaluable breakfast public-affairs program sponsored by the New England Council and Saint Anselm College.

Is he the new Nixon? Yang looks at me appraisingly for a half-second.

“I certainly wouldn’t make that comparison,” he says — and breaks into a belly laugh. 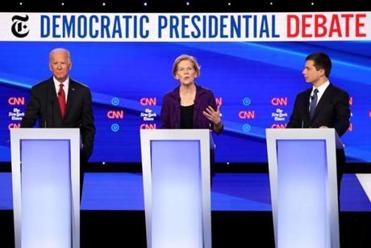 Scorecard: Grading the debate performance of the Democratic candidates

Once the cameras turned on and the three hour debate began, it was fiery, especially when it came to health care and foreign policy.

Why do I ask? Because Richard Nixon was the last major American politician I can remember to propose a government-provided guaranteed basic income for Americans.

Yang, an entrepreneur-turned-citizen-politician, has rechristened the notion as a “freedom dividend.” His big idea: Each year, the federal government should give every American, 18 or older, $12,000 to do with as he or she pleases. To pay for his plan, he’d rely principally on a 10 percent value-added tax, with a range of smaller tax hikes. (Fiscal experts consider his financing assumptions overly optimistic.) The cost would be very large, as in $2 trillion to $3 trillion a year. But as he explains it, the payments are something of a societal cure-all, helping lift millions out of poverty or near poverty, enriching lives, opening new opportunities, allowing parents to spend more time with their children, and imparting an economic shot in the arm to industry-depleted communities.

Yang settled on the idea after studying the toll that automation was taking on the US economy, particularly in stripping away 4 million jobs from the Midwest. That created the economic conditions which led “tens of millions of our fellow Americans” to conclude “that taking a bet on a narcissist reality-TV star was the way to go.” Soon, automated driving technology will start to eliminate truck-driving jobs, the most common occupation for noncollege men, Yang warns. Ultimately, that could spell the loss of some 3.5 million direct driving jobs, he says — and the truck-stop sector as well.

Which leads me to this somewhat puckish question: Why not simply outlaw self-driving trucks? The query reveals an almost painfully earnest side of Yang.

“It’s difficult to say we’re going to outlaw robot trucks but then say a robot inside of an Amazon fulfillment warehouse is fair game, because they are having similar effects on the economy,” he replies. “If you look at robot trucks, they will not just end up replacing human workers, but they will also be better for the environment, because they will have less environmental impact. They will be able to convoy together and lower wind resistance and increase equipment utilization. They may even save lives, because 4,000 Americans die in accidents with human truckers every year. And if the cost savings are estimated to be $168 billion a year, it’s unwise for Americans to say we are going to keep things exactly as they are while every other major economy starts making progress along these lines.”

To which one can only say this: No Luddite he.

And this: Andrew Yang is very unlikely to win the endorsement of the Teamsters union.

Nor, of course, is it likely that Yang will be president, but credit where it’s due. He has reintroduced a big thought-provoking idea into American politics. In doing so, he has attracted a small but dedicated following, one that has helped him outlast several far-better-known candidates. He raised $10 million in the third quarter. He has qualified for each of the first four Democratic debates — and will be on stage for the Nov. 20 debate as well.

It’s quite a testament to him — and the enduring American value of the idea-driven amateur politician.