By dictionary definition, “problematic” means “doubtful, uncertain; questionable.” There’s never anything uncertain about Trump’s actions, and that includes his pointed evocation of acts of racist terrorism. Everything he does is very deliberate. Still, just wait — someone will call Trump’s usage of a term that conjures black pain and should engender American shame “problematic,” as if that even comes close to capturing the agonies he resurrected for his own repugnant self-pity party.

No word has starred in more headlines or news reports throughout the Trump presidency than “problematic.” It’s the go-to expression to describe whatever contemptible behavior or comment he or his administration is inflicting on the nation.

Recently, it was used to characterize acting chief of staff Mick Mulvaney’s creaky defense of his boss’s unconstitutional quid pro quo with Ukraine. Just before a Cincinnati rally in August, Trump was asked whether he would stop his supporters “if they begin to chant something problematic.” 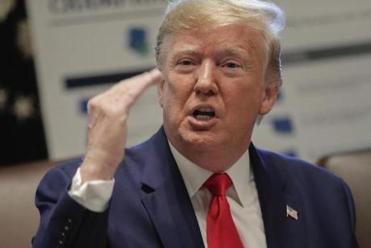 Jeneé Osterheldt: Donald Trump is not being lynched. But the effects of lynch culture are real

Black men were murdered for looking white men in the eye. Black women were raped by white men as punishment. We like to think of these things as America’s tragic history. Except black people are still dying.

At Trump’s previous rally, his supporters chanted “Send her back,” an ugly screed against Representative Ihan Omar of Minnesota, a frequent Trump target. Days earlier, Trump had tweeted that Omar, and fellow congresswomen Ayanna Pressley, Alexandria Ocasio-Cortez, and Rashida Tlaib — all frequent Trump critics and women of color – should “go back” to the “totally broken and crime infested places from which they came.”

Evoking — again — one of this nation’s most painful racist tropes is far more than “problematic.”

Yet every time Trump’s actions are described with this word, it lessens the exacting toll of this man’s corrosive conduct.

JENEÉ OSTERHELDT: Donald Trump is not being lynched. But the effects of lynch culture are real

More than three years into this national catastrophe, there is simply no more room for wan, hedging vocabulary about Trump. This is a devouring fire, yet “problematic” barely hints at a whiff of smoke.

Of course, such reductions benefit Trump in the same way that racist government and law enforcement officials during the civil rights era benefited from newspapers downplaying the racism of laws and actions that marginalized and ended countless black lives. It fostered a narrative that robbed the vicious truth of ill intentions.

Trump may not be smart, but he is a con man who has always understood the power of repetition in words. That’s why for decades he called himself a billionaire businessman again and again. Soon that’s how he was always identified, even without a solid lick of proof as to its veracity.

Imagine if every time Trump’s actions had been called “problematic” — which is like a cousin to “racially insensitive” or “racially tinged” — he had been called racist. Perhaps there still wouldn’t be so much lingering squeamishness about gluing Trump’s own long history to him.

Of course, the media play an oversized role in this. It’s the journalistic thought leaders who still wind themselves into knots trying to avoid saying the most obvious things about Trump. Only after Trump won would some even acknowledge that his campaign was propelled by racism, not economic anxiety. This shouldn’t have been a grand revelation.

A few days ago, Jeffrey Toobin, of The New Yorker and CNN, again expressed his regrets for amplifying stories about former Secretary of State Hillary Clinton’s e-mails during the 2016 campaign. He said he hopes “a lesson is learned.”

I’m not sure enough has been learned since 2016, not when Trump apologists, enablers, and those too weak to face hard truths continue to soft-pedal this administration’s serious transgressions as nothing more than “problematic.”