A look of covetousness curdled the crimped countenance of the Great Trumpkin. It was not the garden variety jealousy he felt toward those who, say, knew who Frederick Douglass was, or understood that Western-style liberalism didn’t refer to the ideology of San Francisco’s various mayors.

No, this was an entirely different kind of envy. There was a term for it.

Whatever it was called, the Great Trumpkin knew it when he felt it, and he felt it now, looking at photos of his dear soulmate Kim Jong Un. There Little Rocketman was, astride a glistening white stallion. He was cantering along the snowy flanks of Mount Paektu, a sacred North Korean peak, where the supreme leader went to suffuse himself with spirituality before making momentous decisions of state. Like whether to execute an uncle or assassinate a half brother.

“He, sitting on the horseback atop Mt. Paektu, recollected with deep emotion the road of arduous struggle he covered for the great cause of building the most powerful country with faith and will as firm as Mt. Paektu,” the North Korean news agency reported. 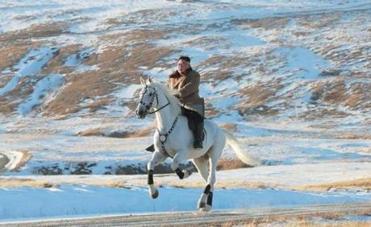 North Korea released a series of photos showing leader Kim Jong Un riding a white horse to a sacred mountain. Near the mountain, Kim reportedly vowed to overcome US-led sanctions that he said had both pained and infuriated his people.

There was a time when the Great Trumpkin had gotten that kind of adulation from his own unofficial state news agency. But even some of the fawning Foxies were now having second thoughts. Not Sean Hannity, thank goodness. He was still there to deliver a prime-time shoe shine.

Still, having one or two obeisant bootlickers hardly took the edge off the Great Trumpkin’s envy of the North Korean despot. Kim’s father had given him an entire country, replete with concentration camps to imprison his critics, and not just the paltry $400 million or so in tax-dodged dollars that Fred Trump had funneled to young Donald.

And Kim never had to worry about impeachment the way the Great Trumpkin did. It was all so maddening. One day, you make a perfect, pernicious phone call to push an aid-seeking ally to churn up some mud on one of your Democratic rivals, and the next thing you know, Nancy Pelosi is acting as though you’d committed some high crime or misdemeanor. Now the speaker had walked out of a White House meeting, accusing him of having a meltdown, and all he could say in response was: I know you did, but what did I do?

Thank goodness political thuggery didn’t bother today’s Republican Party! Yes, they were upset that he had sold out the Kurds, but most of them had only shrugged when he thumbed his nose at the Constitution by ordering his administration to stonewall the House’s impeachment inquiry.

Republicans had gotten plenty exercised about lesser things during Bill Clinton’s day. Why, back then, they’d even added an obstruction-of-justice article to their impeachment charges. The Great Trumpkin’s frown gave way to a self-satisfied smile. In transforming the GOP into his own political cult, he had at least purged the party of its pesky purported principles! Nothing was going to happen in the Senate, not with him in firm control of Mitch McConnell, and Mitch in command of the geldings in the it’s-all-OK-with-us corral.

He looked again at the photo of Dear Kim. Everyone he admired had themselves photographed on horses.

If only he could ride a horse. Oh, not bare-chested like Vladimir. Do that, and Chelsea Handler would no doubt mock him the way she had parodied Puti, with a shirtless ride of her own and a snide comment that she had firmer boobs.

But how would he mount up? It would take a stepladder or maybe even a crane. That would make him look more like a stooge — probably Curly — than a genuine strongman.

And yet, how he longed for the symbolism of a steely leader bending a mighty beast to his will!

Suddenly it hit him. He dialed the director of the National Zoo.

“I’m deciding on your budget,” he said. “I would like you to do us a favor, though: Do you have a docile old elephant I could take for a ride?”