It’s hard to have a stand-out performance on a crowded stage, where a dozen candidates are not just vying for speaking time, but trying for memorable moments. It’s even harder if you aren’t a top tier candidate.

And that makes what South Bend, Ind., Mayor Pete Buttigieg did on Tuesday all the more remarkable.

The minor city mayor made himself a major player by forcefully underlining his pragmatic, results-oriented liberalism, and not just on domestic policy but on foreign affairs as well.

He began his advance in a pointed exchange with de facto Democratic frontrunner Elizabeth Warren on the merits of his add-a-public-option-to-the-Affordable Care Act versus the Bernie Sanders/Warren compulsory-single-payer-with-no-private-insurance scheme.

“I don’t think the American people are wrong when they say that what they want is a choice,” Buttigieg said. “And the choice of Medicare for All who want it, which is affordable for everyone, because we make sure that the subsidies are in place, allows you to get that health care. It’s just better than Medicare for All whether you want it or not.” For good measure, he undermined the political pitfalls of Warren’s approach: “I don’t understand why you believe the only way to deliver affordable coverage to everybody is to obliterate private plans, kicking 150 million Americans off of their insurance in four short years . . .” 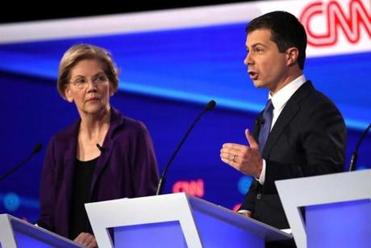 Warren had no real retort beyond saying that Buttigieg’s plan was really “Medicare for All who can afford it,” which only scans if one ignores his call for increasing the subsidies that help people purchase Obamacare plans.

The big health care divide — expanding and improving the ACA versus starting over with single-payer — has become something of a Groundhog Day debate affair, repeated in one form or another in each and every DNC forum. Still, Buttigieg took the case of his choice-based plan to Warren, supposedly the master Democratic debater, and poked (or enlarged) several substantial holes in her stand.

He had another compelling moment in an exchange with neo-isolationist Tulsi Gabbard over the need for the United States to keep its word to the Kurds, whom President Donald Trump has just betrayed by ordering a US troop withdrawal from northern Syria. The representative from Hawaii tried to fashion Turkey’s attack on the Kurds as “yet another negative consequence of the regime change war that we’ve been waging in Syria.” Buttigieg, who served in Afghanistan as a US Navy Reserve intelligence officer, was having none of it.

“Respectfully, Congresswoman, I think that is dead wrong,” he said. “The slaughter going on in Syria is not a consequence of the American presence. It’s a consequence of a withdrawal and a betrayal by this president of American allies and American values. . . . [A] small number of specialized, special operations forces and intelligence capabilities were the only thing that stood between that part of Syria and what we’re seeing now, which is the beginning of a genocide and the resurgence of ISIS.”

Next came an extended back and forth in which Buttigieg outpointed former Representative Beto O’Rourke of Texas over the latter’s plan for a nominally mandatory, but foggy-on-effective-enforcement buy-back program for assault weapons.

Buttigieg’s big moments were important for several reasons. They established him as a forceful presence, they expanded his distinctive ideological space, they distinguished him from the top tier candidates, and they reinforced his persona as a political pragmatist.

In that way, they stood apart from the tinnier efforts of other candidates to make the debate-highlights reel. Witness, for example, California Senator Kamala Harris’s attempt to take Warren to task for failing to endorse her call for Twitter to shut down Trump’s account — as though a social media company could reasonably deny the president of the United States the right to use its platform.

Buttigieg has long punched above his weight, at least as measured by his political office, but Tuesday is the first time he has been a compelling player over the entire course of a debate.

Senator Amy Klobuchar of Minnesota also has reason to be pleased with her performance, though her memorable moments were more an objection to Warren’s occasional assumption of moral superiority because she has more sweeping plans, and an assertion of her own Midwestern electability.

Warren, whose target-of-most-attacks status shows she is emerging as the Democratic front-runner, had an uneven evening. Pressed repeatedly about whether funding her Medicare for All health care plan would require middle-class tax increases — something principal sponsor Senator Sanders acknowledges — Warren sidestepped again and again by saying she wouldn’t sign any plan unless it decreased total costs to middle-class families. (That is, the benefit her single-payer system would offer would be greater than its cost.) There, she sounded like a robot stuck in dodge and duck mode, something her rivals were more than happy to point out.

That said, Warren had a compelling moment in arguing that, though more difficult to do, her proposed two percent tax on total wealth over $50 million was a more effective revenue-raiser than the various tax increases other are proposing.

“Taxing income is not going to get you where you need to be the way taxing wealth does,” she said. “We need a wealth tax in order to make investments in the next generation.”

Senator Cory Booker of New Jersey had a compelling moment in speaking about the advancement that comes of a common struggle rather than rugged individualism, but that moment came late and wasn’t enough to make him a fully realized debate presence.

As for the others, former vice president Joe Biden held his own, though the inapt or inapposite word seemed to tumble out of his mouth with disquieting frequency. Billionaire Tom Steyer seemed hugely pleased not just with himself but with his each and every answer, though why that was so remained very much a mystery. Entrepreneur Andrew Yang was Andrew Yang, reinforcing his pleasantly quirky brand. Sanders seemed subdued and lower key. Not only did he smile once or twice, the senator from Vermont actually seemed to laugh on one occasion. He didn’t have a good answer to the age question — that is, how can a 78-year-old who has just suffered a heart attack assure voters he is up to the stress of the presidency? — and with good reason: There really isn’t one. But Sanders was at least easier to listen to in his more modulated, lower-volume mode. Former US housing secretary Julian Castro tended to get lost.

Whether this debate changes the structure of the race is anybody’s guess. But judged by who did best in delivering smart, distinct, candidacy-clarifying moments, this was clearly Pete Buttigieg’s night.