I was eight months pregnant when I learned my editor planned to assign my desk to someone else once I left for maternity leave. “You’re a short-timer,” he explained, when I asked why he was handing off my workspace, and with that, essentially my job.

That was 1989 — 11 years after the passage of the federal Pregnancy Discrimination Act, which is supposed to protect pregnant women from being fired or demoted. That’s why the basic theme of Elizabeth Warren’s story — that she lost a teaching position because she was pregnant — rings true to me and many other women who have been tweeting about the subject since Warren’s account of pregnancy and work colliding has come under attack.

When you run for president, every aspect of your life story undergoes harsh scrutiny, whether it’s Bill Clinton’s draft avoidance, how George W. Bush ended up in the Texas Air National Guard, Barack Obama’s relationship with the Rev. Jeremiah Wright, or Donald Trump’s pay-off to Stormy Daniels. It’s up to voters to weigh any discrepancies and judge their overall importance to a candidate’s credibility. So far with Warren’s pregnancy story, there’s no way to get to the absolute truth. But personal experience tells us what most likely happened to her.

In 1971, when Warren was a young teacher, there were no laws protecting pregnant women in the workplace and it was common for pregnant teachers to be forced to leave their jobs. Thirty years ago, the law then in place didn’t stop a boss from giving away my desk and job. And discrimination against pregnant women continues today. While it can be subtle, its effect on careers is always corrosive.

The school principal who allegedly showed Warren the door died in 1999, so he’s unavailable for comment. School board minutes, unearthed by The Washington Free Beacon, a conservative website, say her contract was renewed in April 1971; two months later, board minutes say her resignation was “accepted with regret.” But, as Greg Sargent wrote in The Washington Post, it’s unlikely someone would record minutes that said, “Fired Mrs. Warren for getting knocked up.” One local newspaper article from the era, reported on by CBS News, said Warren was “leaving to raise a family.” Another said she had “resigned for personal reasons.” 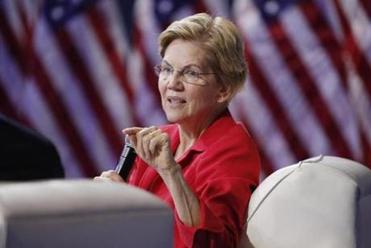 Editorial: Warren acts fast on complaint, but why the secrecy?

The Warren campaign needs to be more forthcoming about the firing of a senior aide.

In an interview Warren gave in 2007, which was highlighted in a tweet by a writer for Jacobin, a left-leaning publication, she never mentioned pregnancy as the reason for leaving. Instead, she said she took a couple of graduate courses in education, and decided, “I don’t think this is going to work out for me.” None of that excludes pregnancy as the ultimate cause for her exit from teaching. When I returned to work after my maternity leave, few people knew the real reason for my switch to a different department. Like many women, I didn’t want to rock the boat.

Warren’s standing by her account. “When I was 22, and finishing my first year of teaching, I had an experience millions of women will recognize,” she tweeted, after the attacks gained media attention. “By June I was visibly pregnant — and the principal told me the job I’d already been promised for the next year would go to someone else.” In a statement to CBS News, she also said that as a candidate, she is opening up more about her life.

This story ultimately leaves voters to their gut instincts and biases. Those who already believe Warren is a truth-bender, because of her unsupported claim of being Native American, will see this as more evidence of an honesty problem. Warren’s advocates will process the information in the most positive light for the candidate. Working mothers will factor in their own experiences, including the treatment they received during pregnancy.

Perhaps the one truth that can be agreed on is that Warren is now the Democrat to beat in 2020. The polls show it, and so do the attacks on her story about losing a teaching position because she was pregnant.