Let’s start by stating the obvious.

You can’t impeach a president without a vote. Not without a number of them, actually.

There will have to be votes on articles of impeachment in the House, and if one or more of those articles is sent to the Senate, there will be votes there on whether to convict the president.

So if impeachment goes forward, every member of Congress will have to take a public vote. That’s the way it should be.

But the impeachment inquiry process should also start with a vote. And so far, it hasn’t. It’s just been a decision by Speaker Nancy Pelosi and her leadership team to commence such an inquiry. 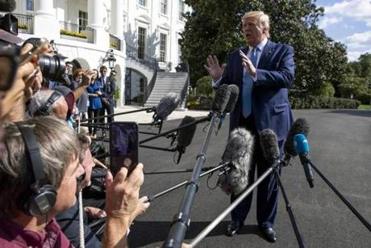 President Trump has taken his efforts to obstruct Congress’s impeachment inquiry to frightening new depths. And Republicans have his back.

The speaker, normally the adult in the chaotic high-school cafeteria that is Washington, insists that such a vote is not necessary. Constitutionally, that may be true. However, there are several significant problems with proceeding without one.

First, it robs the inquiry of an aura of proper and appropriate process. Although some 228 Democrats, or 10 more than a simple majority of House seats, have indicated they support an impeachment inquiry, one can’t say with absolute certainty that they would vote that way. A formal tally would make those declarations official.

One reason House leadership doesn’t want to hold such a vote is that it would present a quandary for Democrats in swing districts, where voting for such an inquiry could cost them their seats in 2020. But that isn’t a legitimate reason to duck. Not on an issue of this magnitude. A process aimed at removing a president is about as serious as things get in our democracy. You can’t hide from the heat or take shortcuts.

Further, as we saw this week with White House Counsel Pat Cipollone’s letter to House leaders, the absence of such a vote gives Trump a fulcrum to justify his refusal to comply with House demands and subpoenas. Formally authorizing the inquiry will eliminate Trump’s principal justification for stonewalling the process.

Politically, it’s not just swing-district Democrats who will be on the hot seat. With Trump deprived of his noncooperation rationale, House Republicans will also find themselves in a difficult spot trying to defend both the president’s rogue behavior and his failure to comply.

Certain House members have offered up a there-was-no-quid-pro-quo defense of Trump’s effort to push Ukraine President Volodymyr Zelensky to investigate Joe and Hunter Biden. Others have tried to dismiss his call for China to investigate the Bidens as a joking remark.

Let them spin those risible arguments out to the broader electorate.

Other House members may resort to the less ridiculous stand of Ohio Senator Rob Portman: Yes, Trump’s phone call with his Ukrainian counterpart was troubling, but it’s not serious enough to justify impeaching or removing a president. That formulation allows a Republican to signal that he is not an arrant sycophant, while still giving Trump a pass. Problem: Although such a stand might be a politically defensible position for later votes on articles of impeachment, a nay on authorizing an inquiry would be a much harder line for Republicans to defend. It’s tantamount to saying yes, this conduct is troubling — but there’s no need to look further into it.

But whichever way this investigation goes — and it certainly seems to be headed for impeachment — the process must rest on rock-solid ground. That is all the more true since obstruction, as evidenced by a failure to cooperate with the House investigation, seems destined to be such a large part of it.

Whichever way this investigation goes — and it certainly seems to be headed for impeachment — the process needs to rest on rock-solid ground.

The right move is to stand up, hold a vote, and be willing to suffer the consequences or reap the rewards.