‘Dollars Over Democracy” should be the NBA’s slogan.

Like so many American companies, league officials always knew what they were getting into when they went into business with China. Those billion-dollar deals promoting basketball in the world’s most populous nation came with an unwritten and impossibly high price — looking the other way when China repressed dissent or violated human rights.

Then came these seven words: “Fight for freedom. Stand with Hong Kong.”

Daryl Morey, general manager of the Houston Rockets, never mentioned China in his now-deleted tweet, but it didn’t matter. His public support for those who’ve filled Hong Kong’s streets for months in protest against China’s creeping authoritarianism was inevitably perceived as a slap against the mainland.

To appease China, the NBA is collapsing faster than a bottom-dwelling team tanking games to improve its draft position. In a groveling statement, the NBA affirmed its “great respect for the history and culture of China” and recognized that Morey’s tweet “deeply offended many of our friends and fans in China, which is regrettable.” 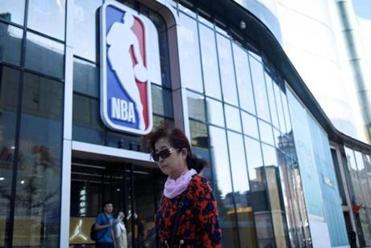 CCTV said it is investigating “all cooperation and exchanges with the NBA,” which would include the broadcast of its full season.

Of course, China is slapping back — hard. Several companies have already pulled lucrative sponsorships from the Rockets. The Chinese Basketball Association, led by Yao Ming, the Chinese superstar who spent his Hall of Fame career in Houston, has suspended its relationship with the Rockets. Broadcasts of NBA pre-season games are also being blacked out by China’s government-controlled media.

China is grabbing the NBA by the wallet. Now Adam Silver, the league’s commissioner, thinks he can defend free speech while calming the ire of a nation whose leaders view such freedoms as something to be quashed.

“I don’t think it’s inconsistent on one hand to be sympathetic to them, and at the same time, stand by our principles,” Silver said during a press conference. “There are consequences from that exercise of [Morey’s] freedom of speech, and we will have to live with those consequences.”

Chinese officials, who never hesitate to toss around their considerable financial weight to stifle critics and get what it wants, is having none of it. “We believe that any speech that challenges national sovereignty and social stability is not within the scope of freedom of speech,” China’s state CCTV wrote in a statement.

This is what Silver and the NBA deserve. It’s not as if China’s government suddenly became enemies of democracy. Cash, and lots of it, triumphed over conscience as the league amassed a hoop-loving fan base in China that, it often boasted, was twice as large as America’s population.

Silver’s equivocating may seem surprising. Since he became NBA commissioner, in 2014, he has been largely portrayed as the anti-Roger Goodell. While the NFL commissioner is viewed as a doltish lackey for the team owners, Silver gained a reputation for both expanding the league’s reach and standing on the side of social justice.

When Donald Sterling, then owner of the Los Angeles Clippers, was heard disparaging black people on a leaked audiotape, Silver delivered a death sentence. Sterling was permanently banned from the NBA, fined $2.5 million, and stripped of his authority over the team. Silver was widely praised for his swift and definitive actions.

Of course, that was easy compared to the spot where Silver now finds himself and the league. Going up against one racist isn’t the same as going up against a government all but minting money for the league. He’s scrambling for daylight, and no one should be surprised if he steps on American principles to dissuade China from scrapping joint business ventures with the NBA, like a $1.5 billion deal with a Chinese streaming company.

Hong Kong protesters are fighting for their lives. The NBA is fighting for its bottom line. And history tells us that will always be a mismatch in America, which brutally built its own economic might through the greatest crime against human rights that the world has ever known.