In case anyone forgot how much big business hates the idea of Senator Elizabeth Warren in the White House, Mark Zuckerberg just reminded them.

If Warren — who has called for the break-up of big tech companies — gets elected president, “then I bet that we will have a legal challenge, and I would bet that we will win the legal challenge. And does that suck for us? Yeah,” said Facebook’s chief executive during a series of town hall meetings with employees, according to audio recordings that were leaked to The Verge. In response, Warren fired back one of her typically Fearless Woman tweets: “What would really suck is if we don’t fix a corrupt system that lets giant companies like Facebook engage in illegal anticompetitive practices,” among other evils.

Nope, Zuckerberg and Warren are never going to be Facebook friends.

Beyond that certainty, Zuckerberg’s candor — conveyed, in the spirit of the day, via whistle-blower — highlights a key aspect of the electability challenge Warren still faces, even as she surges in the polls. To many titans of old or new corporate self-interest, Warren’s persistence when it comes to advancing her economic ideals is scarier than President Trump’s corruption when it comes to selling out the country for his own political benefit.

The Massachusetts senator and former Harvard Law professor is now pitching herself as a humble Okie with many big plans to help the little guy. In her quest to connect with primary voters, she’s taking thousands of selfies with adoring supporters, turning her dog into a social media star, and telling CNN she fell for her husband because he had “good legs.” Her campaign to promote herself as a likable human being is working with other human beings. But she can’t stop the business world from disliking her, given that her plans involve reining in Wall Street, breaking up Big Tech, and raising taxes on the wealthy. 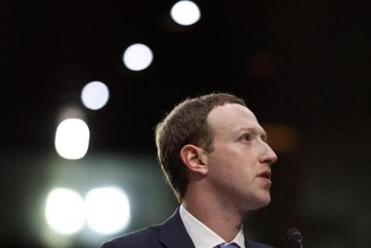 Facebook’s CEO made headlines Tuesday after parts of a candid conversation with his employees was published online. Here are some interesting things we learned from the leaked audio.

According to a recent CNBC report, some Democratic donors are preparing to sit out the 2020 presidential cycle — or even back President Trump — if Warren wins her party’s nomination. And that revelation came after Speaker Nancy Pelosi announced the House would begin a formal impeachment inquiry into Trump — and before news that Bernie Sanders, 78, was undergoing a procedure for arterial blockage, which hypothetically could shift support to Warren.

Warren has been wearing the attacks as a badge of honor. When CNBC’s Jim Cramer said that Wall Street executives have been telling him “She’s got to be stopped,” Warren tweeted a link to his comments, along with these words: “I’m Elizabeth Warren and I approve this message.” Tweeting a link to the CNBC report about donors potentially ditching her for Trump, she wrote, “I’m not afraid of anonymous quotes and wealthy donors don’t get to buy this process.”

The wealthy donor class doesn’t get to buy the process. But it can undermine her if voters come to believe her plans hurt the country and don’t help them. And, from a political perspective, the resistance from big business may still figure into the “Can she win?” equation, which could benefit rival Joe Biden. The former vice president has also been mucked up by the Ukraine scandal that triggered the impeachment inquiry into Trump. How that ultimately affects his “electability” argument is anyone’s guess. But Biden may still have a hold on voters who see him as the only way to stop a business-hating lefty, who wrongly claimed to have Native American heritage, from becoming the party’s nominee. Biden has been getting some help from Obama-era officials who tangled with Warren during the post-recession recovery period, and now attack her, mostly anonymously, as ruthless, misguided, and worse.

In the leaked audio recordings, Zuckerberg said he would “go to the mat” over the “existential” threat Warren poses to his social media empire. But in Warren, he and others have met a presidential candidate who is unafraid of the bulls and bullies of corporate America.

Victory for Warren depends on finding enough voters who are just as fearless.