When he wasn’t going on about the “tremendous onslaught” of refugees at our “very dangerous southern border,” President Trump in his State of the Union went on instead about America’s “unprecedented economic boom.”

Of an “economic miracle” from sea to shining sea.

I’m thinking: What? How can anybody buy such baloney anymore? Did he somehow miss the out-of-money federal workers lined up days ago at food pantries?

The economy may indeed be “thriving” for the near-rich, rich, and super rich, like Trump, all beneficiaries of his massive tax cuts. But even with low unemployment and high job numbers, there’s no “economic miracle” for anybody else. 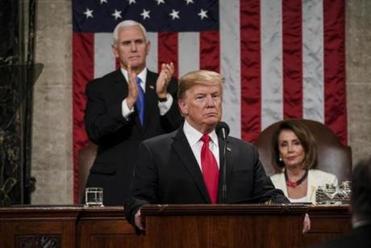 Trump’s State of the Union: Nothing matters

When you have a president whose word is largely worthless, how can anyone take what he says seriously?

One good thing about the government shutdown? It reminded struggling Americans that they’re not the only ones. Hundreds of thousands of full-time federal workers live from paycheck to paycheck. So do a majority of Americans with full-time jobs.

“With cold weather, the oil tank will need to be filled,” Kim Greenwich, of Leicester, an IRS secretary, told the Globe in the midst of the shutdown. “With no paycheck next week, no, it will not get filled,” she said, worrying for her 78-year-old mother, who lives with her.

But even before the shutdown, you only had to Google “cash-strapped Americans” and story after story would pop up:

“If the economy is so great, why are 78 million Hustling for Dimes.”

“It’s No Accident Americans Are Still Broke in a Booming Economy.”

“If the economy is ‘roaring,’ why are so many Americans still struggling?”

“Seventy eight percent of Americans live from paycheck to paycheck.”

Or maybe it’s not that awful: About half of us can probably survive two lost paychecks before the repo man’s at the door.

You might say the stock market, though it plummeted in December, has brought good times under Donald Trump. But nearly half of Americans have zero invested in the market and only 32 percent of us have 401(k) plans.

And let’s not forget the horrible stories of Americans with health insurance who are bankrupted by illness nonetheless, or the millions who can’t afford to get sick.

After he was bounced from his mother’s insurance plan on his 26th birthday (a provision from Obamacare, which Trump has mightily tried to decimate), Alec Smith’s monthly insulin costs jumped from between $200 and $300 a month to $1,300, STAT reported. He couldn’t afford that much and started to ration his medicine. Within weeks he was dead.

Economists will tell you the working and middle class is in this sad mess not because of laziness or wild spending on cable TV. No, it’s because of policies that politicians, on behalf of rich donors, put in place over decades to “rig” the system — as Trump himself said back when he campaigned as Robin Hood.

Now? “We passed a massive tax cut for working families,” Trump said again on Tuesday, boldly, with a straight face, apparently hoping little guys and gals haven’t yet figured out his scam.

“People have been played,” says David Weil, labor and employment expert and dean of Brandeis’s Heller School for Social Policy and Management. “Millions are still stuck in poverty working for minimum wage. The inequality in the last 20 years — you have to go back to the 1920s to see something similar.” And while those born in 1940 had a 90 percent chance of outearning their parents, Weil estimates that those born in 2000 have “significantly” less than a 50 percent chance.

But Robert Kuttner, of the progressive American Prospect, thinks a battered America may finally have had enough. Kuttner points out that ideas the president might call “socialism” — like “Medicare for all” and higher taxes on billionaires — are now moving mainstream as cash-strapped Americans realize: The true national emergency is not at the president’s “very dangerous” border. It’s in everyday Americans’ very empty wallets.