National Security Adviser John Bolton’s departure on Tuesday was surprising, even in an administration marked by chaos and staff upheaval.

A host of reports about what led to Bolton’s departure filtered out of the White House through media reports on Tuesday. Fundamentally, Trump clashed with Bolton’s hawkish approach to foreign policy.

Despite their differences, the departure was still unexpected: Bolton was set to appear Tuesday with Secretary of State Mike Pompeo and Treasury Secretary Steven Mnuchin in a White House briefing that was announced just hours before he was fired. 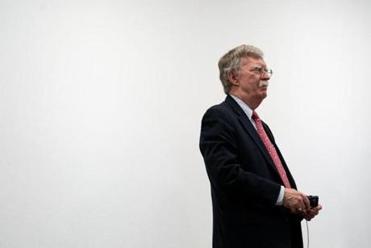 Bolton responded in a tweet of his own that he offered to resign Monday ‘‘and President Trump said, ‘Let’s talk about it tomorrow.’’’

Here’s a timeline of what led up to Bolton’s departure:

Sunday, Aug. 28: Bolton was booked to defend the Trump administration on the Sunday morning talk shows, but backed out, according to CNN. The cancellation reportedly angered Trump.

Bolton expressed reluctance to defend Trump on TV. I'm told he had been soft-booked to do "Meet the Press" & "This Week" on August 25, but backed out. An official tells CNN he felt uncomfortable defending the admin on various issues. W/@Kevinliptakcnn @jamiegangel @kaitlancollins

Friday, Aug. 30: According the New York Times, Trump met with his advisers the Friday before Labor Day to discuss the withdrawal from Afghanistan, and Bolton, who joined via video conference, expressed opposition to any deal with the Taliban. Over the next several days, Trump proposed holding a meeting at Camp David to finalize the negotiations.

Saturday, Sept. 7: Trump announced on Saturday evening that he was canceling the previously secret meeting with Taliban leaders after an attack in Kabul killed an American service member. The Washington Post described the cancellation as one part of “a broader victory for Bolton.”

Sunday, Sept. 8: NBC News reported that Bolton and Pence were united in their opposition to the Camp David meeting, a report denied by Pence and one that angered Trump.

That?s Absolutely Right Mr. President. More Fake News! The Dishonest Media never contacted our office before running with this story and if they had, we would have told them I FULLY support your decision. https://t.co/zjzro1fzSg

Monday, Sept. 9: CNN reported that “a bitter argument” erupted Monday in the Oval Office over the Camp David plan.

John Bolton and President Trump got into a bitter argument last night over the president?s plan to host Taliban leaders at Camp David, two people tell me.

It?s unclear if it was on the phone or in person.

Morning of Tuesday, Sept. 10: Despite the apparent fallout, Bolton was still leading meetings as late as Tuesday morning, according to CNN.

Bolton's firing was so sudden that he was leading a principals committee this morning on the refugee cap for next fiscal year, an administration official tells me.
The meeting ended just ONE HOUR before Trump tweeted that he had fired Bolton, the official says.

Noon on Tuesday, Sept. 10: President Trump announced Bolton’s departure in a tweet around noon, claiming that he asked for Bolton’s resignation and received it Tuesday morning.

As the news rocketed through Washington and beyond, Bolton began texting reporters with his version of events, claiming he resigned umprompted:

Ambassador Bolton to me just now: ?I will have my say in due course. But I have given you the facts on the resignation. My sole concern is US national security.?

Ambassador Bolton sends me a text message just now: ?Let?s be clear, I resigned, having offered to do so last night.?

From the New York Times: “Offered last night without his asking,” Bolton wrote. “Slept on it and gave it to him this morning.”

Here’s a look at the resignation letter:

1:30 p.m. Tuesday Sept. 10: Barely an hour after news of his departure, Secretary of State Mike Pompeo and Secretary of the Treasury Steven Mnuchin appeared together at the briefing on terrorism sanctions that was initially set to include Bolton.

Asked whether he was surprised Bolton had been fired given that he’d been on the White House schedule just hours earlier, Pompeo replied:

“I’m never surprised. And I don’t mean that on just this issue.”

Material from the Associated Press was used in this report.
Loading comments...
Most Popular in news
Real journalists. Real journalism. Subscribe to The Boston Globe today.