When then-businessman and reality television star Donald Trump endorsed Mitt Romney in the 2012 presidential race at Trump’s hotel in Las Vegas, Romney had a hard time putting the experience into words.

“There are some things that you can’t imagine happening in your life,” Romney said at the time. “And this is one of them.”

Monday night came another event he might not have imagined, as Trump, now president, endorsed Romney for a US Senate seat in Utah.

.@MittRomney has announced he is running for the Senate from the wonderful State of Utah. He will make a great Senator and worthy successor to @OrrinHatch, and has my full support and endorsement!

Romney was quick to respond on Twitter, thanking the president for his support.

But consider this: The years between the two endorsements have been anything but cordial. In 2016, Romney denounced Trump as “a phony” who didn’t have the temperament or the judgment to serve as president. Trump kicked back, saying Romney “choked like a dog” during his own two bids for the presidency. The insults continued, even after Trump briefly considered Romney to serve as his secretary of state. 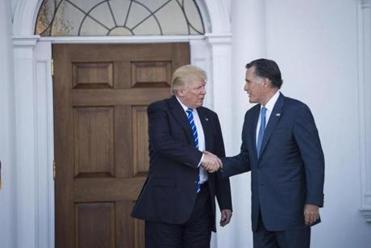 The president tweeted that Mitt Romney “will make a great Senator” and has “my full support and endorsement!”

With that kind of history, it’s hard to imagine their newfound detente will be long lived. The only real question now is when Trump will rescind Romney’s endorsement and what will cause that to happen.

Since Romney first began considering a Senate run several months ago, he has been careful not to poke Trump — and particularly so since announcing his candidacy Friday. His aides have repeatedly said he isn’t running to be the anti-Trump guy in Washington. Romney’s announcement video never even mentioned the president.

And Trump’s endorsement reflects political logic. Romney doesn’t face a serious challenge, either in the primary or in the general election. It makes sense to want to repair a relationship with the would-be victor, who will probably go on to be a powerful force in the Senate because of his celebrity.

But the last time Trump used political logic to endorse in a high-profile US Senate race, he regretted it. Ahead of the Republican primary in the Alabama Senate race, Trump endorsed incumbent Republican Luther Strange over Roy Moore, who ended up winning the primary. The logic behind the Strange support? Trump needed to back someone he knew would vote with him in the Senate, and Strange was viewed as the best chance to win. When it became clear that Strange was going to lose the primary, Trump backed off.

Given the easy election Romney is expected to have, Trump need not fear a repeat of Alabama, but he might regret his endorsement, should Romney up the rhetoric against Trump’s antics.

It’s not hard to see how this could happen. After the clashes in Charlottesville last year, Trump offered a response that came across as sympathizing with white supremacists. A number of Republicans, Romney among them, were quick to denounce Trump’s actions. As a private citizen, Romney didn’t have to speak up against Trump about Charlottesville. But as a US Senate candidate, he’ll have no choice.

It’s easy to see how a harsh Romney response could prompt a volatile Trump to withdraw his endorsement in the Utah Senate race — with a harshly worded tweet. And thus will end the latest fragile peace between the two.

After all, Trump’s political base — which might feel that Trump is caving to the Republican establishment in backing Romney in the first place — might rejoice in such a move.