This story was updated on Jan. 3.

Massachusetts Governor Deval Patrick leaves office on Thursday, after more than 2,500 days as governor and 3,800 public appearances around the state, country, and world.

Patrick’s legacy and priorities can be seen in where he went during his time in office, how frequently he visited those destinations, and what he talked about while there. In many of his appearances, transportation and energy issues were highlighted topics, an analysis of Patrick’s schedule by the Globe shows.

“From his first day in office, Governor Patrick has made a point of being governor of the whole state, and has prioritized spending his time in ways that will create growth and opportunity across the Commonwealth,” said Jesse Mermell, spokesperson for the governor, in an email.

Throughout his eight-year tenure, more than half of all Patrick’s public appearances occurred at the State House or in other parts of Boston. 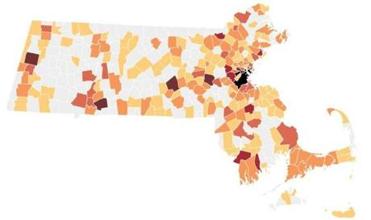 Patrick’s public appearances around the state

Patrick’s other Massachusetts events centered in large and mid-size cities, including Worcester, Springfield, and Cambridge. In all, he made public appearances in 59 percent of the Massachusetts municipalities, touring much of the eastern side of the state while leaving out significant portions of Central and Western Massachusetts.

Once he had secured a second term, Patrick jetted to foreign countries more frequently, visiting Israel and the United Kingdom twice and doing lengthy tours in Asia and South America.

In all, Patrick appeared in public 3,824 times in 275 destinations — 208 in Massachusetts and 67 out of the state — during his eight-year governorship.

The governor traveled primarily in the United States during his first term, holding only 123 appearances, or 7 percent of his total public appearances, outside of Massachusetts. During that term, Patrick traveled to just two foreign countries: China and Canada in 2007.

During his campaign for reelection he visited more Massachusetts communities than in any other year in his term. That year, 2010, he visited 107 Massachusetts towns and cities. About 96 percent of his public appearances were in-state.

In 2011, after he was reelected, that percentage dropped to 82 percent, as Patrick took off on extensive out-of-state and out-of-country travel. He made 109 appearances outside of the Commonwealth of Massachusetts, the highest annual number during his two terms.

How many public events did Patrick have?

Number of public appearances by year

Throughout his governorship, Patrick made public appearances in 59 percent of the state’s 351 towns and cities.

More than half of his appearances — a total of 2,038 events — occurred in Boston, from the hallways and conference rooms of the State House to theaters, businesses, and schools in neighborhoods across the city.

Outside of Boston, Patrick’s top Massachusetts destination was Worcester, where he attended 103 events. He appeared in Cambridge 79 times. He visited Pittsfield for 41 public appearances.

Of the 207 Massachusetts cities and towns in which he had public appearances during his two terms, 107 were visited three or more times.

Appearances throughout the US

Beyond Washington, he made four trips to California to attend 21 public events in San Diego, the Bay Area, and Los Angeles. He had eight public appearances in New York and six in Chicago.

Patrick also made appearances in each of the remaining five New England states at least once, speaking at Brown University in Providence and Colby College in Waterville, Maine, moderating a forum on health care reform in Burlington, Vt., talking about energy innovations in Bretton Woods, N.H., and speaking with Obama at an event in New Britain, Conn.

Public appearances across the US
US cities visited at least twice according to Patrick's public schedule
DATA: Massachusetts Governor's Office
Globe Staff

In 2007, Patrick traveled to China and Canada.

In 2013, he appeared in Colombia, Ireland, Canada, Hong Kong, Japan, and Singapore .

In 2014, he went to the United Arab Emirates, Panama, Israel, Mexico, Denmark, the United Kingdom, and France.

The number of Patrick’s international trade missions increased as his time in office progressed. The number of his appearances abroad more than tripled during his governorship, from 18 events in 2007 to 68 in 2014.

The scheduled events during these trips varied, from meeting economic officials in Beijing to discussing climate change in London. Most trips were considered trade missions, intended to foster business ties between Massachusetts and the respective countries.

Where in the world did Patrick travel

Patrick’s official schedule included notations for days in which he did not make any public appearances. Those days included vacations, office days, travel days, and weekends.

As of Dec. 17, 37 percent of his schedule was noted without public events.

The schedule provided by the governor's office was not complete. Between Jan. 5, 2007, and Dec. 17, 2014, Patrick’s public schedule had notations on 2,786 days, which was 96 percent of the total number of days during that time window.

Days with no public appearances
Number of days without public events on governor's schedule by year
2007
160
2008
166
2009
147
2010
122
2011
125
2012
89
2013
131
2014
97
DATA: Massachusetts Governor's Office
Globe Staff
Todd Wallack of Globe staff contributed to this report. Catherine Cloutier can be reached at catherine.cloutier@globe.com. Follow her on Twitter at @cmcloutier.
Loading comments...
Most Popular in news
Real journalists. Real journalism. Subscribe to The Boston Globe today.