Each day, the cars would cruise onto the Milton driveway to the $1.9 million mansion. The drivers would retrieve plastic cases full of brown paper bags, authorities said, returning hours later with cash.

The scene described in a federal agent’s affidavit led to the arrest this month of the home’s owner, Deana Martin, 51. She was accused of conspiring to sell 220 pounds of marijuana through her unlicensed online delivery service, Northern Herb, which employed 25 people and allegedly paid no taxes.

With sales of $14 million, Northern Herb was one of the biggest Massachusetts marijuana operations shut down in recent memory. But even now with recreational pot legal in the state, the size of Northern Herb and its many competitors shows that the illegal market continues to thrive — undercutting the legal trade and filling a need for many consumers.

About 75 percent of the state’s cannabis sales this year will take place under the table, according to industry analysts, who blamed the state’s slow rollout of stores, many of them in far-flung communities. Two-and-a-half years after voters approved legalization, home delivery is not allowed and only 15 retail stores have opened statewide, with just one in Greater Boston.

The Northern Herb bust was celebrated by police, some policy makers, and medical marijuana dispensaries, who called this month for a systematic crackdown on illicit sellers. 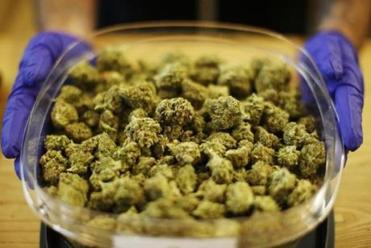 A Milton woman allegedly ran a marijuana delivery service that operated across Massachusetts and employed at least 25 people.

But some marijuana consumers were outraged at the prospect of more takedowns of people who, they say, fill a void not met by the current legal options.

“Doesn’t it seem as if the legislature & law enforcement are suffering from a huge case of bitter grapes? The people voted to legalize,” tweeted Craig Caplan, 50, a Boston souvenir-business owner who believes easier marijuana access would boost tourism.

Caplan said in an interview the state should focus on licensing new stores, not arresting more people. “If there’s plenty of access, there’s no need for a black market, but right now, there’s still a need.”

As Massachusetts’ marijuana industry slowly grows, many consumers say the legal options are more costly and less convenient than their dealers. Since pot stores opened in November, they have sold $76.8 million worth of products, but that represents a small portion of the state’s cannabis economy, industry analysts say.

Delivery is legally available only for medical marijuana patients. While Oregon and California allow home delivery, Colorado and other states do not. The Massachusetts Cannabis Control Commission is slated to vote on delivery around June.

But Google “Boston pot delivery,” and you’ll see a slew of websites offering to bring you marijuana, edibles, or oils within hours. Some claim to sell T-shirts or juices for $55, $150, or $330, with a side “gift” of cannabis.

“Any free Marijuana or Cannabis gifts that may or may not be included by the driver are neither being advertised nor promoted to the public,” one website explains.

None of the delivery businesses requires a medical card, despite the fact that only medical marijuana dispensaries are currently allowed to deliver. Martin’s business routinely told customers they didn’t need a card, authorities said.

Martin will plead not guilty, said her lawyer, Brad Bailey.

Because none of the delivery outfits is licensed by the state, they don’t have to comply with expensive and strict rules aimed at health and safety. For example, federal agents said Northern Herb received its marijuana products through the mail from California and Oregon, where the plant can be grown outdoors far more cheaply than in Massachusetts. Meanwhile, licensed sellers must produce everything in-state, tracking each plant in an effort to prevent illegal sales.

The delivery websites operate blatantly online, but they can fall through law-enforcement cracks because they aren’t in a physical location that police forces see as their jurisdiction, said Walpole Police Chief John Carmichael, who serves on the state cannabis advisory board. He said such investigations are also time-consuming and complex, and it’s easier to arrest the street seller than the kingpin.

“Obviously, law enforcement acknowledges that’s our responsibility — it’s just how much we can actually focus on it and the resources we can put into it,” Carmichael said. “We’re still trying to deal with the opioid issue.”

The federal government pursued Martin after she filed for bankruptcy in 2016 and didn’t disclose her involvement in Northern Herb. It’s the type of case US Attorney Andrew Lelling has said he would prioritize when it came to marijuana. While even possession of cannabis is illegal under federal law, Lelling has said he would instead focus his marijuana enforcement on people involved in organized crime or selling to children.

The investigation into Martin revealed e-mails in which she boasted about delivering products to 300 customers a day. Her business routinely arranged to deliver pot to unattended places, such as porches or mailboxes, authorities said, so no one checked the buyer’s age.

Some state officials, while applauding federal enforcement such as in the Martin case, also want to step up their efforts.

Two Worcester lawmakers — Senator Michael Moore, a Democrat, and Representative Hannah Kane, a Republican — have filed a bill to create a task force of police, regulators, and revenue and health officials that would investigate and penalize illicit operators.

Moore and Kane unveiled the bill early this month at the State House, flanked by police and cannabis commissioners Britte McBride and Kay Doyle.

“If it’s not something that is an enforcement priority, [illicit sellers] are just operating,” said McBride. “That flies in the face of what the people of this agency come to work every day to do and what the voters wanted that passed this ballot question.”

The proposal calls for civil or criminal penalties. McBride said she wants efforts to focus on unlicensed businesses that act like they’re legitimate.

Also supporting the bill: the Commonwealth Dispensary Association, which represents medical marijuana retailers that spent millions of dollars to open under strict regulations.

“No one wants to restart the war on drugs,” executive director David Torrisi said. “But at the same time, I think going after illegal operators, seizing their products, fining them . . . that’s a good thing that can only help the legal market.”

But social justice advocates argue that leaders should focus on transitioning people from the illicit market to the legal one, fearing that enforcement could perpetuate racial disparities in policing.

“Anytime ‘police’ is brought up, I’m like, ‘That’s more black and brown people going to jail,’ and the data proves it,” said Kamani Jefferson, president of the Massachusetts Recreational Consumer Council. A recent cannabis commission report showed that over the past decade, black and Hispanic people were disproportionately arrested for marijuana possession and distribution statewide, compared with whites.

To migrate consumers from the illicit market to the legal one, cannabis Commissioner Shaleen Title said, it’s important to make the regulated industry competitive on price and convenience, which research shows drive choices on where to buy.

McBride said the commission needs to keep working to smooth a path to legality for dealers. But, she added, “I’m not so naive to believe that every person who’s operating in the illicit market has a desire to come into the regulated market.”

Federal agents say Martin wanted to grow her illicit business, renting a property in California as a distribution hub and avoiding taxes. If convicted, Martin faces five to 40 years in prison.

In one exchange quoted in the federal affidavit, someone e-mailed Martin that California was cutting its marijuana tax rates.