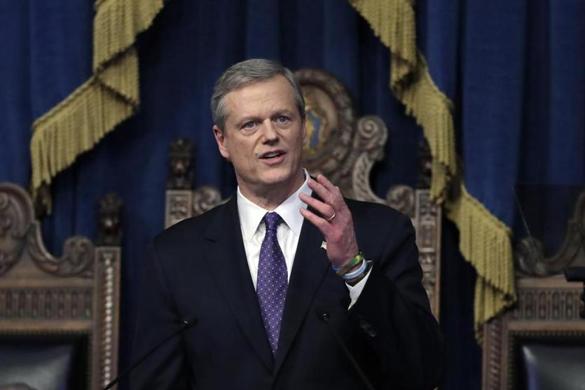 Governor Baker on Wednesday unveiled a $44.6 billion budget proposal that would hike the fee imposed on Uber and Lyft rides across the state by 80 cents, and then funnel the $100 million in new funding it would raise into the MBTA and municipal coffers.

Eleven Boston police officers assigned to a school unit started wearing body cameras this week, in what the city’s school district called “an opportunity to showcase and enhance the department’s commitment to transparency.”

Hey Log Cabin Republicans, Trump is not your friend.

Three years into his disastrous reign, it takes some pretty serious mental and moral gymnastics to ignore indisputable facts and argue for this president’s fitness for office. Enter the Log Cabin Republicans.

Why did Justina Pelletier’s parents’ relationship with Children’s deteriorate?

One person shot on Dorchester Avenue

Dozens of academics, free speech advocates, and bold-type authors, actors, and musicians, including Salman Rushdie, Joyce Carol Oates, and Roseanne Cash, have come to the defense of a Babson College employee who was fired earlier this month for a joke Facebook post that suggested Iran should compile a list of 52 American sites to bomb.

■  FATAL CRASH Two people died and another was injured when a pickup truck and a car collided on Granite Street in Braintree early Wednesday morning, according to police. The victims were identified as Bryan Davila Martinez, 23, and Jan Rivera, 20, both of Randolph. The white truck was traveling south, and the dark-colored sedan north, when they crashed in the area of 647 Granite St. around 4 a.m., police said. One male in the sedan was pronounced dead at the scene, and a second male in the sedan was pronounced dead at a local hospital. The driver of the pickup truck was taken to a local hospital with injuries that were not considered life-threatening. The crash is under investigation.

Abraham is a Metro columnist. Her work appears on Thursdays and Sundays.

Farragher is a Globe columnist and associate editor. He spent eight years as editor of the Spotlight Team.

Walker has been a columnist for the Metro section since 1998. His column runs Mondays and Wednesdays.

He bought the fencing coach’s house. Then his son got into Harvard

The Needham house was assessed at $549,300, but sold for nearly a million dollars. The buyer, who never lived a day there, would sell it 17 months later at a substantial loss in what may become the next chapter in the national debate over fairness in college admissions.

After 22 years, Volpe has announced his plans to exit next year.

Family, friends, teammates, and well-wishers gathered on Wednesday morning to celebrate the life of Grace Rett, a Holy Cross rower who had turned 20 last week.

New Hampshire is basically the only place the US senator is making his pitch, betting his campaign on a gamble that a strong showing in the first-in-the-nation primary can catapult him out of obscurity and into contention.

Governor Baker’s annual budget proposal includes a long-awaited plan for a new oversight board at the MBTA, including a seat for cities and towns.

The number of million-dollar earners in Mass. is soaring — here’s where they live

The latest count shows a 12.5 percent spike in the number of million-dollar earners in Massachusetts.

The report describes the region west of Boston as “a seeming land of plenty where some struggle to thrive,” the executive director of Foundation for MetroWest said.

State Fire Marshal Peter Ostroskey issued a warning Tuesday about a viral video challenge popular with teenagers that could damage electrical systems or spark a fire.

Several others have similarly been turned away after landing at Logan International Airport.

Governor Charlie Baker is expected to lay out his vision for the coming year in his State of the Commonwealth address Tuesday night.

The Steamship Authority said late Tuesday afternoon that the issue was resolved and that about 10,000 reservations had been made for trips from May to October.

Three weeks before the New Hampshire primary, nearly one in four likely primary voters are still undecided on which candidate they will support.

Many Patriots fans have expressed their views on quarterback Tom Brady’s future, but only one has done so by carving 20-foot letters into the snow atop the lagoon in Boston Public Garden.

All lanes were closed Monday night, after a tractor-trailer rolled over at Route 60 and spilled its contents onto the roadway, State Police said.

A Northeastern University student returning from his home country of Iran on a student visa was detained at Logan Airport on Sunday by US Customs and Border Protection and is in custody waiting to learn whether he will deported.

A man allegedly robbed an Acton convenience store by smashing the glass front door on Sunday night, the latest in a string of similiar robberies in town, police said.

Kayla Quagan, 35, who was last seen on Friday with her dog, “remains out of contact by her own choice,” police said.

Researchers, health officials call for a unified approach to loneliness and social isolation

As populations age across the developed world, prominent researchers and public health officials are calling on nations to pay more attention to the health risks, especially depression and cognitive decline, facing the growing ranks of chronically lonely older adults.

A new method of “reanimating” donor hearts from those who have died from cardiac failure would greatly expand the donor pool.

After a multi-month investigation, Massachusetts State Police raided a North Attleboro home last week that was being used as a secret methamphetamine lab and arrested two people who lived there, police announced Monday.

A UMass Lowell student who died after a car crash last week in Costa Rica is being remembered as a generous friend, devoted son and brother, and devout Muslim.

For Jake Kennedy, it really is a wonderful life

Kennedy has spent his life helping others. Now that he is fighting ALS, a lot of people are paying him back and paying it forward.

A father suffocated and killed a coyote on a trail in Exeter, N.H., on Monday, after the animal attacked his young child, according to police.

Representative Pressley’s comments during a discussion at the 50th annual MLK Memorial Breakfast also led to the day’s most awkward moment when Governor Charlie Baker jokingly lamented that his place on the stage meant he had to follow her and “that rant.” Baker reached out to Pressley later to apologize.

A 25-year-old Shrewsbury man died in a skiing accident in Colorado Saturday after he appeared to have lost control and collided with several trees, police said Monday.

A Chicopee man was arrested for drug trafficking on Thursday after officers allegedly found cocaine, marijuana, cash, and ammunition while executing a search warrant at the suspect’s home.

On quiet Campobello Island, Canadians angered by US inspection of their mail

US Customs and Border Protection agents have been opening mail bound for Campobello since September — searching Amazon packages, personal letters, Christmas presents, and even prescriptions headed toward the island made famous as President Franklin D. Roosevelt’s summer retreat.

Here are some MLK Day events that caught our attention

There are many Boston-area events on Monday commemorating the towering American who endured, persevered, and ultimately lost his life fighting to uplift his countrymen and women.

Lessons from my first patient

A medical student’s experiences in the anatomy lab are an indelible reminder that each patient is someone’s child, parent, and partner.

About two dozen people gathered in the cemetery’s Story Chapel on Sunday, just before the holiday commemorating the birth of the Rev. Martin Luther King Jr., to hear about some of the African American people buried at the cemetery.

The findings include the alleged failure of a Western Massachusetts facility to properly notify the families and legal guardians of patients in situations in which health problems led to five deaths — an assertion the facility’s officials deny.

The crash was likely a result of weather conditions: Temperatures were below freezing at the time, and the snow had recently turned to rain.

Damean Amado Abreau, 23, died after being trapped in the wreckage, officials said. The passenger, later identifed as Adenilzo Lopes, 21, was rushed to Brockton Hospital, where he was pronounced dead.

Tom Tinlin was lucky to survive his aneurysm. Now he’s advocating for other survivors

Tom Tinlin — then the state highway chief — knew almost nothing about brain aneurysms when he was struck by one in 2017. Now he is the new board chairman of the Brain Aneurysm Foundation.