By John Hilliard Globe Correspondent  May 04, 2018

NEWTON — Development along Washington Street has divided residents for years, but the city hopes to replace that acrimony with consensus by asking the public to join a yearlong effort to update rules governing what can be built along the corridor.

The first test came Tuesday night, when a few hundred people packed The Second Church on Highland Street for the start of a series of public discussions on the future of development in the area between West Newton Square and Newton Corner.

“Change is happening all around us, so let’s form it and shape it and make it what we want it to be,” Mayor Ruthanne Fuller told the group of residents, business people, and city officials.

The discussion series is part of a $500,000 project to create new zoning rules addressing land use, economic development, transportation, and other issues along the heavily traveled road next to the Massachusetts Turnpike.

The city has launched its effort to reimagine a future for Washington Street as developer Robert Korff moves ahead with his own vision for reshaping the area, including replacing the Orr Building with the 140-unit Washington Place project. He has proposed other developments along Washington Street, as well. 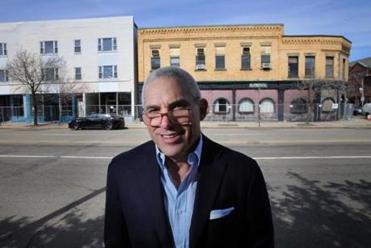 Developer is making dramatic changes to main Newton drag, one property at a time

Amid this hodgepodge of older one- and two-story buildings, Robert Korff sees a golden opportunity for a modern version of the Garden City.

“What we would like to do is have the residents and business owners here in Newton decide what they want, create the zoning, and then have the developers react to what our vision is,” Mayor Ruthanne Fuller said in an interview.

The hope is that a heavy dose of community engagement early in the process can head off the contentious debate that at times has set neighbors against each other and slowed development proposals for Washington Street.

Next month planners will share their concepts for Washington Street, drawing upon the ideas set down at Tuesday’s meeting, and solicit more public feedback, said Russell Preston, the founder of Principle Group, the planning firm hired by the city for the zoning project.

Planners will return with an updated proposed plan for Washington Street and draft zoning changes, which will be reviewed during future public meetings after the summer.

“When people come together to create a vision plan, and change zoning, it’s one of the few tools that [we] as humans have to actually control our future,” Preston told the audience Tuesday.

But assurances that the public process will have a meaningful impact on future zoning may be a hard sell for some, including Fred Goldstein, a telecom consultant who has run his business in Newtonville for 13 years.

He said new zoning needs to encourage a broader range of housing types beyond single family homes and apartment buildings. The city also needs to make it easier for workers to get to their jobs in Newton, he said.

“I’d need to hear that they were actually making improvements for people who actually work here and live here,” he said in a phone interview. “Rather than replace us with a group of young, childless bicyclists who would occupy these huge new rental complexes.”

Ward 2 Councilor Emily Norton, who opposed the Washington Place development, is among those who are concerned that future housing projects will be out of the financial reach of existing residents.

“The mistake we are making is not considering the needs of people living here now,” said Norton in a phone interview. “It’s not going to serve the people who are already low and moderate income, who beg us not to raise our taxes.”

The Washington Street project will be different from past efforts, Fuller said.

During Tuesday’s meeting at The Second Church, participants were organized into discussion groups to focus on specific topics, such as encouraging small businesses to locate on Washington Street.

Each group formed around a table covered by a large map of the area around West Newton Square to Newton Corner, and wrote their ideas for planners directly on their maps.

Resident Ben Bayes said he wants to see changes that would make Washington Street a safe, inviting place for his daughter and his wife to bicycle and walk.

“There’s a highway right next to Washington Street — that’s where the through-traffic should be,” Bayes said in an interview. “I want to have a single car lane, and have it be a pleasant place for everybody to come visit.”

Deb Pierce, who has lived in Newton since 1972, said the area needs more stores and services that cater to local residents, and more community spaces for people to gather. Right now, Washington Street is “inhospitable as a neighbor,” she told the Globe.

Pierce said the city’s public outreach on Washington Street should be expanded to children, teens, and families with young children.

“It’s a good first step,” said Pierce of the outreach. “It’s not enough.”

John Hilliard can be reached at john.hilliard@globe.com
Loading comments...
Most Popular in metro
Real journalists. Real journalism. Subscribe to The Boston Globe today.