The death by suicide of a Boston College student on May 20 was the culmination of a stormy 18-month relationship, during which, investigators say, his girlfriend subjected him to an escalating and “unrelenting” campaign of psychological, physical, and verbal torment.

According to prosecutors, Inyoung You, 21, isolated Alexander Urtula, 22, from his friends and family, exploited his worsening depression, and inundated him with text messages urging him to take his own life.

The case not only offers a grim window into one couple’s dysfunction, it also draws attention to a little-discussed phenomenon: intimate partner abuse against men by women, a controversial and under-recognized issue that challenges gender-based stereotypes about victims and perpetrators of abuse. While research indicates that men and women sustain and commit various forms of intimate partner violence at comparable rates, abuse against men by women remains misunderstood and is often a source of shame and stigma.

“Domestic violence is not perpetrated by one type of abuser; a perpetrator is not limited by their gender, or the gender or their partner,” said Suffolk County District Attorney Rachael Rollins in a press conference on Oct. 28, announcing the indictment charging You with involuntary manslaughter for her alleged role in Urtula’s suicide. “Domestic violence may not always look the same, but it’s always about power and control.”

You is expected to be arraigned Friday in Suffolk Superior Court, according to the Suffolk District Attorney’s office. (The public relations firm representing You has released text messages said to be between You and Urtula just prior to his suicide in which she begs him not to hurt himself.) 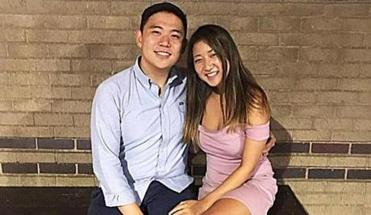 A series of text messages obtained by the Globe reveal the last words Alexander Urtula and Inyoung You purportedly exchanged before Urtula died in Roxbury on May 20.

The statistics make clear that women are much more likely to be injured or killed as a result of intimate partner violence. The federal Bureau of Justice Statistics’ most recent analysis on female victims of violence, for example, found in 2007 that women were killed by their partners at twice the rate of men, making up 70 percent of victims in intimate partner homicides.

And according to the 2015 National Intimate Partner and Sexual Violence Survey, by the Centers for Disease Control and Prevention, women are also far more likely than men to be victims of stalking and sexual violence.

However, studies show women and men are equally likely to experience various forms of abuse in romantic relationships. The same 2015 survey found that about one-third of women and one-third of men experienced physical violence and psychological aggression from a partner at some point during their lifetime.

“I think one of the biggest [misconceptions about domestic violence] is that it doesn’t happen to men,” said Denise Hines, an associate professor of social work at George Mason University, who has conducted multiple studies about male victims of domestic violence at the hands of their female partners.

“A lot of people assume it’s men who are in relationships with other men and that’s the context in which it happens,” she said. “They think men are big and strong enough to stand up for themselves, and so of course, this can’t happen to him.”

While the battered women’s movement of the 1970s succeeded in educating policy makers and the public about the scourge of domestic violence against women — spurring the creation of new laws and a proliferation of programs aimed at protecting women from their abusers — the plight of men in abusive relationships has received much less attention.

Some feminist scholars and activists have argued that domestic violence is an extension of the patriarchy, in which men abuse women as a means of maintaining dominance and control, so resources should be concentrated on curtailing violence against women. But new research shows most intimate partner violence is situational and “bidirectional,” meaning both partners — regardless of gender — are abusive toward each other. Scholars also are adopting new ways of thinking about domestic violence in same-sex and gender-nonconforming relationships.

“There are some researchers and others who engage in practice and policy work who deny that men can be victims, and so it is still quite controversial,” Hines said. “I think it’s time that we just really expand our thinking on this issue.”

Men who suffer abuse at the hands of women face extraordinary hurdles finding and receiving help — even if they are willing to ask for it. Traditional masculine norms not only discourage men from admitting abuse, especially by women, but service providers tasked with helping them may also fail to recognize that men can be victims.

“There is a stigma around all victims experiencing intimate partner violence — males and females, men and women. But for men, the stigma might be slightly different,” said Lisa Melander, a sociology professor at Kansas State University who studies dating violence. “There could be a reluctance in sharing because of the way that men are socialized in our country and around the world.”

Although the Department of Justice requires that federally funded domestic violence agencies serve men and women, these programs traditionally have been aimed at women, with images of women on their websites and gendered pronouns in their literature.

Establishing new resources for male victims of domestic abuse isn’t easy. In 2000, Jan Post founded the Domestic Abuse Helpline for Men and Women in Harmony, Maine — the first national hotline geared launched specifically toward men — after she struggled to find help for a male friend whose wife had been physically and psychologically abusing him.

“I called some different programs in Maine, and basically, they hung up on me,” she recalled. “[They’s say,] ‘We don’t help men,’ or they’d give me a number for a local male batterers intervention program.”

By 2005, volunteers for the helpline were fielding more than 250 calls a month from men and from women seeking help for men around the country, Post said. But she had a hard time getting funding. In 2012, she was forced to close up shop.

“We use [gender] neutral language now,” Brown said. “When we talk about victims, we don’t make it sound like the victim is always a woman and the abuser is always a man.”

In a sign of progress, in the past two years, the first shelters designed with male victims of domestic violence in mind opened in Dallas and in Batesville, Ark.

“Ten years ago, if a man called a domestic violence agency and said, ‘I need some support’ ... [the agency] would refer him to a batterers’ intervention program because we didn’t know what to do with men,” Brown said. “We’re making it easier [now] for more males to come forward.”

Still, the data shows that a small fraction of men use domestic violence resources. Casa Myrna, for example, provides services to about 1,800 survivors of domestic or intimate partner abuse every year, Brown said. Just 2 percent of them identify as men.

At The National Domestic Violence Hotline based in Texas, Heather Frederick oversees a team of about 65 advocates who run the hotline’s web-based chat and text messaging services. She said the advocates on her team make contact with at least one male victim per day.

And yet, the stigma that abused men often face keeps them from seeking help, she said.

“The pressure on men to be stoic, to be strong, to be the breadwinners, to be the provider, to be the protector of their families and people in their communities really means that men are less likely to report intimate partner violence,” Frederick said. “Men don’t feel like they can reach out.”