ALLENSTOWN, N.H. — For years, the bodies of a nameless woman and child were buried at St. John the Baptist Cemetery, under a headstone engraved with the words “here lies the remains known only to God.”

Over the years, people left fresh flowers and teddy bears in their memory, a poignant reminder of an enduring mystery.

In 2000, 15 years after the bodies were found in a barrel in the woods near Bear Brook State Park, the skeletal remains of two more children were found nearby in a second barrel. Investigators went back and exhumed the bodies of the woman and child, the start of a long quest to find out who they were.

On Saturday, nearly 100 people gathered for a solemn and bittersweet funeral service as Marlyse Honeychurch and her daughter, Marie Elizabeth Vaughn, were laid to rest. They had been living in California when relatives last saw them around Thanksgiving 1978 and were identified earlier this year through familial DNA, genealogy searches, and painstaking detective work by law enforcement and public volunteers across the country.

“They have their names back, and they can rest in peace,” said David Salamon, 48, of Oregon, who came from across the country, along with three of his sisters, to bid farewell to his slain sister and niece. “Thank you from the bottom of our hearts.” 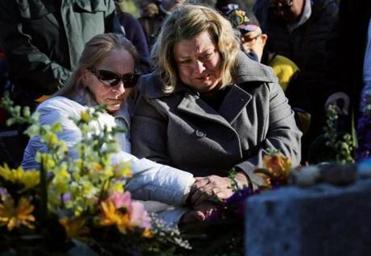 Diane Kloepfer, of Chicago, wants to know the name of her half-sister, whose body was found in a barrel in Allenstown, N.H., in 2000.

He said his family had never stopped looking for his sister, who was 24 when she vanished, along with her two daughters, Marie, then 6, and Sarah McWaters, nearly 1. He said it had been especially tough on their mother, who died two years ago, grief stricken and never knowing what happened to them.

“I just kept telling my Mom, ‘she’s out there somewhere,’ ” said Paula Hodges, 59, of Bellflower, Calif. “The way they found them is sad, but at least they found them, and now we know where they are. We don’t have to search for them anymore.”

In June, authorities also identified Honeychurch’s daughter, Sarah, as one of the Allenstown victims. Her remains were buried in September at another cemetery.

The identity of the third girl remains a mystery, though authorities have determined she was the daughter of Terry Peder Rasmussen, a serial killer who traveled around the country using various aliases and murdered all four of the Allenstown victims in the late 1970s or early 1980s.

Rasmussen, who died in prison in 2010, had left an ex-wife and four children who hadn’t seen him since around 1974 and were stunned by the discovery two years ago that he had left a trail of dead women and children — including his own daughter.

On Saturday, Rasmussen’s daughter, Diane Kloepfer, 50, of Bolingbrook, Ill., met Honeychurch’s family for the first time during an emotional introduction at the cemetery when she arrived for the graveside service.

“They made me a part of their family today,” said Kloepfer, who wiped away tears and clutched the hand of Honeychurch’s sister, Michelle Chagaris, of Oklahoma, as she and the family sat together on chairs placed in front of two urns, surrounded by fresh flowers, holding the remains of mother and daughter.

“A name is a powerful thing, it sets one apart,” said Deacon Bill Lavalee, who spoke about the New Hampshire community that never forgot the Allenstown victims and came together to help identify them after 34 years.

It was that devotion that led Honeychurch’s family to return the remains of Honeychurch and her daughter to the cemetery where they had first been buried, when their names were still unknown. Now, the old headstone stands next to a new one, bearing their names.

“We didn’t want to take them back from their adopted family,” said Honeychurch’s sister, Roxanne Barrows, 66, of California. “And we’ll come back every year.”

The case had remained one of New Hampshire’s most baffling murder mysteries until a woman’s search for her parents helped unravel it.

Rasmussen, then using the name Bob Evans, had been living in Manchester, N.H., with his girlfriend, Denise Beaudin, and her 6-month-old daughter, when all three vanished after Thanksgiving in 1981, investigators said. Beaudin’s family never reported her missing because they believed the couple was having financial difficulties and she had left voluntarily, according to police.

Authorities said they believe Rasmussen killed Beaudin, then abused her daughter for five years before abandoning the child at a California trailer park in 1986. At the time, he pretended to be her father. Beaudin’s remains have never been found.

In 2002, Rasmussen — using a different alias — killed Eunsoon Jun, a woman he had married a year earlier, and buried her body in the basement of their Richmond, Calif. home. When he was being questioned about Jun, police ran his fingerprints and discovered he was the same man who had abandoned Beaudin’s daughter, Lisa, years earlier, but they didn’t know his real name. A DNA test revealed he was not Lisa’s father.

Lisa’s search for her birth parents led her, and investigators, back to the woods of New Hampshire.

Investigators discovered a link to the Allenstown slayings after DNA tests revealed that Rasmussen was the father of one of the little girls murdered and dumped in a barrel.

Kim Fallon, chief forensic investigator for the New Hampshire Medical Examiner’s office, has been working on the Allenstown case for a dozen years and was among those who gathered at the cemetery Saturday for the graveside service. She said she’s confident authorities will identify the last victim.

The cold case won’t be closed until they do, said John Cody, a former state trooper who found the second barrel with victims in the woods and also attended Saturday’s funeral.

“You want to say this brings closure, but it doesn’t until that last one is named,” he said.