ALLENSTOWN, N.H. — As a child, Diane Kloepfer often dreamed that her father would come back and rescue her from her mother.

She recounted a troubled childhood with an abusive mother, who kept a padlock on the refrigerator while her four children went hungry and often disappeared for days at a time, leaving them to fend for themselves.

For years, as adults, Kloepfer and her siblings searched genealogy websites and the Internet unsuccessfully trying to find their father.

But two years ago, any illusions Kloepfer had about Terry Peder Rasmussen, the father she last saw when she was about 5, were shattered when New Hampshire State Police showed up at the suburban police station outside Chicago where she worked as a dispatcher.

They told her that Rasmussen was believed to be a serial killer who had traveled the country using various aliases and died in prison in 2010 after murdering his second wife. He was suspected of killing a woman and three little girls — including one who was his daughter — decades earlier and dumping their bodies in steel barrels near a state park in Allenstown, N.H. 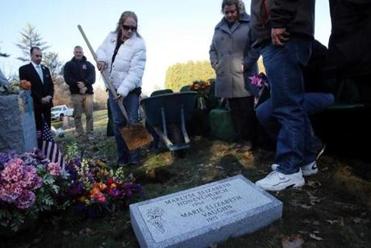 Funeral for mother and daughter brings closure to longtime mystery

Nearly 100 people gathered in New Hampshire for a solemn and bittersweet funeral service as Marlyse Honeychurch and her daughter, Marie Elizabeth Vaughn, were laid to rest.

Investigators asked Kloepfer for a DNA sample, which she readily provided. The results confirmed their suspicions about Rasmussen.

“My heart broke in small pieces,” Kloepfer, 50, of Bolingbrook, Ill., said during an interview with the Globe. “I know my heart will never be the same.”

On Saturday, the married mother of two was among nearly 100 people who gathered at St. John the Baptist Cemetery as two of her father’s victims were laid to rest. Their names had remained a mystery for 34 years until June, when they were identified as Marlyse Honeychurch, who was 24 when she was last seen in California in 1978, and her daughter, Marie Vaughn, born in 1971.

“I want to pay my respects and tell people how sorry I am,” Kloepfer said. “It’s part of this weird journey I’ve been put on through no choice of my own.”

Shortly before the service began, Kloepfer met Honeychurch’s brother and three sisters for the first time and was overwhelmed with emotion.

“They told me they didn’t blame me and it was not my fault,” Kloepfer said. “They made me a part of their family today. Not only did they expect me to participate in the funeral, but they wanted me to.”

She’s haunted by the thought that her father could have killed her and her other siblings.

“If my mother hadn’t left when she did, that probably would have been me,” she said. “That is hard for me. I have some sort of weird survivor guilt thing going on.”

A third Allenstown victim was identified as Honeychurch’s other daughter, Sarah Lynn McWaters, born in 1977, and her remains were released to a paternal relative and buried in September at another cemetery.

‘I want to pay my respects and tell people how sorry I am. It’s part of this weird journey I’ve been put on through no choice of my own.’

However, authorities have yet to identify the fourth victim, Kloepfer’s half-sister, who forensic investigators estimate was born between 1975 and 1976 and would have been about 4 when she was killed. Her remains have not been released for burial. Authorities have said they fear Rasmussen also killed that child’s mother.

“It’s important for me that she gets her name back,” said Kloepfer, who didn’t know she had another sister until the murder mystery began to unravel over the past few years.

Rasmussen, who was born in Denver in 1943, married Kloepfer’s mother in Hawaii in 1968. The couple were living in Phoenix with their four children in 1973 when Rasmussen’s wife left with the children, New Hampshire authorities announced two years ago after identifying him as the killer.

In December 1974, Rasmussen and an unidentified woman showed up unexpectedly at the Payson, Ariz., trailer where his estranged wife and children were living, according to authorities.

But, Kloepfer says that visit may have been later, possibly in 1976. She remembers her father visited with a girlfriend, a tall, slender woman with light brown hair wearing glasses. She wonders whether she was the mother of her unidentified slain half-sister.

Kloepfer doesn’t recall the woman’s name, but has a fond memory of her picking up snow and showing her and the other children how to make a treat by sprinkling it with milk and sugar.

It was the last time Kloepfer saw the woman or her father.

Authorities have said they believe Rasmussen killed Honeychurch and the three girls sometime between the late 1970s and 1981 while living in Manchester, N.H., under the name Bob Evans.

In 1985, hunters discovered a barrel near Bear Brook State Park containing the bodies of a woman and girl who would be identified years later as Honeychurch and her oldest daughter. Fifteen years later, investigators found the second barrel, containing the skeletal remains of Honeychurch’s second daughter and Kloepfer’s sister.

“It’s important to me that she has the name that her mother gave her and that her mother be found,” Kloepfer said. “It could have been all of us and if it was all of us who would be there to fight for us to get our names back?”