It was a seemingly innocuous task: Clean the restaurant’s kitchen floor before the evening rush.

But that common chore went horribly wrong Thursday afternoon at a Buffalo Wild Wings restaurant in Burlington when the 32-year-old general manager died after being exposed to fumes from an accidental mixture of two cleaning agents.

Interim Burlington Fire Chief Michael Patterson on Friday identified the victim as Ryan Baldera of Lawrence, who left behind a wife and infant son.

An employee of the sports-themed restaurant had mixed a highly acidic detergent, Scale Kleen, as well as the chlorine- and bleach-based Super 8, to clean the restaurant’s kitchen floor Thursday afternoon, Patterson said.

“He didn’t know there was going to be a reaction by mixing the two,” Patterson said in a phone interview Friday evening. 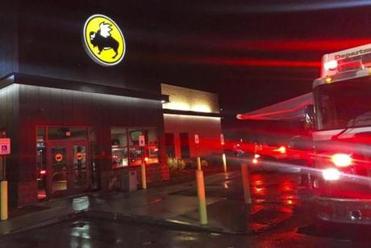 What is Super 8, cleaning agent linked to death of Buffalo Wild Wings worker in Burlington?

Here’s what you need to know about the cleaning agent at the center of the hazmat incident in Burlington.

The mixture turned a greenish hue and started to bubble, and the eyes of the worker who was cleaning the floor started to burn, according to the chief.

“He knew something was up and he got outside real quick,” he said.

Baldera, using a squeegee, tried to get the product off the kitchen floor when he inhaled the toxic fumes and was overcome, Patterson said.

He was transported to Lahey Hospital, where he was pronounced dead.

“This was just a tragic accident,” the chief said.

In addition to Baldera, 13 others transported themselves to local hospitals in what investigators deemed to be a “serious hazmat material incident” at the restaurant, Patterson said Friday. All had been released by Friday afternoon, the chief said.

Roger Fuller, Baldera’s track coach in high school, described him as a “real leader” and “extremely hard-working, very accommodating to other guys on the team.”

Baldera competed in a variety of events, said Fuller, including long jump, high jump, and 300-meter hurdles. He also ran the lead leg for the 4x400 relay team.

“He was a great, great kid, willing to do anything for the team,” said Fuller, who retired from coaching in 2016. “It’s a horrible tragedy.”

While multiple agencies investigate the circumstances around the incident, more became known about the chemicals involved.

Joel Tickner, a codirector of UMass Lowell’s Toxics Use Reduction Institute, thought the tragedy was avoidable.

“It does provide a wake-up call as to why we need to invest in safer chemistry,” he said.

“It is a common product,” he told reporters Thursday.

Memphis-based Auto-Chlor, which sells Super 8, said in a Friday statement that the company is “doing everything we can to determine all details behind this incident.” The company indicated it is cooperating with Occupational Safety and Health Administration and local authorities.

“First and foremost, our condolences are with the individual and their family as well as those affected yesterday during the incident,” said the company in its statement. “The safety and well-being of our customers are our first priority, always.”

A primer from Auto-Chlor provides detailed information on the cleaning agent, which is a clear yellow liquid with a chlorine odor, according to the company website. The site says Super 8 is incompatible with “strong acids, nitrogen and oxidizers.”

The company also notes that the hazardous ingredient in Super 8 is sodium hypochlorite. Scale Kleen, the other substance thought to have been mixed in the incident, is also an Auto-Chlor product. The company describes it as “an excellent acidic general purpose cleaner” that is effective in “removing scale deposits caused by the precipitation of water hardness minerals.”

The National Institutes of Health describes sodium hypochlorite as “a chlorine compound often used as a disinfectant or a bleaching agent.”

According to the NIH website, sodium hypochlorite when “heated to decomposition . . . emits toxic fumes of Na2O and /hydrogen chloride.”

Health experts say common cleaning products containing sodium hypochlorite such as bleach should not be mixed with ammonia, which is contained in other cleaning products, because the reaction produces toxic gases. The same goes for mixing bleach with any acid, which can also be found in household cleaning products.

The restaurant remained closed Friday morning as cleaning crews continued working there, and grief counselors were onsite, according to a tweet from a WCVB-TV reporter.

A Buffalo Wild Wings spokesperson didn’t immediately respond to Globe inquiries regarding grief counselors and the expected time the location might reopen.

The spokesperson did, however, send a statement the company initially released Thursday night, which said the chain is “shocked and saddened to learn of this tragic accident at our franchise-owned sports bar and are working closely with our franchisee and the authorities while they conduct an investigation. Because the investigation is ongoing, we are unable to share any additional comment at this time.”

Burlington police and fire departments, the state’s Department of Fire Services, and OSHA are all participating in the ongoing investigation.

Officials said Thursday night that there was no active threat to public safety.

An OSHA spokesperson said Friday via e-mail that the agency “has opened an inspection at the Buffalo Wild Wings restaurant in Burlington, Mass., in connection with last night’s fatality,” and that the purpose of the review is “to determine whether or not there were violations of workplace health and safety standards in connection with this incident.”

The agency has up to six months to complete its inspection.

Emily Sweeney of the Globe staff and Globe correspondent Sofia Saric contributed to this report. Travis Andersen can be reached at travis.andersen@globe.com. Follow him on Twitter @TAGlobe.
Loading comments...
Most Popular in metro
Real journalists. Real journalism. Subscribe to The Boston Globe today.