It was a reach across the generational divide.

A pair of millennial gerontologists and aspiring entrepreneurs invited strangers of varying ages to grab a drink together at a Dorchester craft beer brewery.

“Aging is a team sport,” said Shellito, who recalled growing up close to her grandparents in Wichita, Kan. “This is a very youth-oriented society, with plastic surgery and Botox and dying your hair and trying to look young. We want to help change the conversation about aging and shape a new culture.”

The scene for their first foray was the Dorchester Brewing Company, where the crowd typically skews young. About three dozen people gathered in the back room earlier in October to sample hoppy pale ales and blends of stouts and porters. 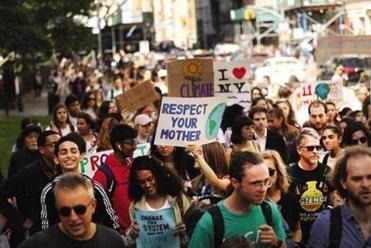 Beware the labels: Contrived generational wars disguise the failure of the American Dream

It’s not about “greedy” Boomers or “slacker” Gen Xers. It’s about a generation-spanning decline in upward mobility.

Guests with white hair and dark hair and every shade in between gathered at wooden-barrel tables, lifting glasses of hefeweizens and hazy IPAs near rows of stainless steel brewing tanks.

“I love learning from young people,” said Catherine MacAulay, 72, a retired nurse from West Roxbury. “Many cultures have older and younger people together all the time.”

IN IDEAS: Contrived generational wars disguise the failure of the American Dream

Shellito and Wickersham, both new to the city, handed out fliers to classmates and associates, cops and politicians, and folks they bumped into in classes, book clubs, coffee shops, even a neighborhood Polish festival.

There was no agenda, and no speeches, though the hosts — who cofounded a business in June called Gerontology Innovation Consulting — climbed onto a bench to greet the crowd and hand out bags emblazoned with the slogan “Intergenerational Everything.”

The happy hour was also a chance to promote the organizers’ data analytics and market research startup. The duo hope to help companies and nonprofits brand their organizations and market products to older consumers. (Pro tip: Avoid the term “elderly.’’)

They’ve branded themselves as “the millennial experts on aging” and describe their data-based research as “geroanalytics.” They’re also considering new niches such as a “grandparent speed dating” service, which would match young people living in a new city with older residents for mutual support and companionship.

Wickersham, who was raised in Syracuse, N.Y., said she and Shellito view themselves as equal parts entrepreneurs and aging advocates.

“People have a negative view toward aging,” Wickersham said, “and that’s got to change.”

At the happy hour, people tried to jump-start that change as the beer flowed.

Bob Madden, 75, a lifelong Dorchester resident who retired as an investigator in the Suffolk district attorney’s office, said he ran into the organizers one morning at Greenhills Irish Bakery in Adams Village and decided to fit their event into his social calendar.

“You can go down to Dot Avenue and go all the way to the Milton line,” he said.

Madden told Jansen her neighborhood “used to be in St. Kevin’s Parish, back when there was still a St. Kevin’s.” He cited another point of interest: the Rainbow Swash painting on Dorchester’s LNG gas tank. “That’s Ho Chi Minh,” he said, referring to a blue stripe on the tank where some see the bearded Vietnamese revolutionary’s profile. “I was in denial, but you have to study it.”

Jansen nodded. “I bought a print of that [tank] at the SoWa market,” she said.

She added, “Boston can be intimidating, but I love everything about Dorchester. There’s a lot of working-class people there, but that’s [similar to] where I come from, too.”

At a table behind them, 26-year-old Danielle Waldron of Taunton, who’s studying aging and autism at UMass Boston and works as a ball girl for the Pawtucket Red Sox, was talking to Cheryl Harding, 73, an adviser on senior issues to Boston City Council president Andrea Campbell.

“The thing about seniors in the city of Boston is we’re large in numbers, and we’re the ones who go out to vote in every election,” Harding said. “People think that as long as seniors have food and shelter, that’s all they want. But seniors want to be involved in the process.”

“This is my honorary grandmother,” Louis said of Harding. “She takes me under her wing. I can tell her about things going on in my life, and it feels like family.”

Louis said his real grandparents also played a big role in his life.

“I think we need to build that bridge between seniors and people who are younger,” he said. “They took care of us growing up, and we need to take care of them.”