A family of five found fatally shot in their Abington home Monday were killed in a murder-suicide, prosecutors said Wednesday.

In a statement, Plymouth District Attorney Timothy J. Cruz said the state medical examiner’s office had determined that Deirdre Zaccardi, 40, and her three children — 11-year-old Alexis and 9-year-old twins, Nathaniel and Kathryn — died from “shooting by firearm and the manner of the deaths were determined to be homicide.”

Deirdre’s husband, Joseph Zaccardi, 43, died by suicide from a gunshot wound, according to the medical examiner’s office.

State and local police are investigating the killings. Investigators haven’t commented on a potential motive.

The grim announcement came as friends of the family continued to grieve the tragic loss. On Facebook, Sarah Gregonis Wall of Whitman posted a photograph of a smiling Deirdre Zaccardi standing with other members of Keeping Pace with Multiple Miracles, a support group for parents with multi-birth children. 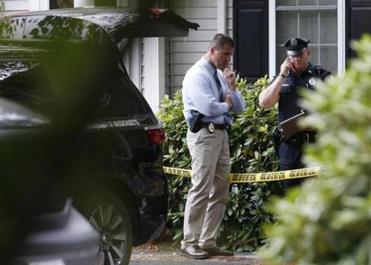 Here’s a look at what is known about the Abington tragedy that authorities have described as “unimaginable.”

“There’s a photo that keeps coming up in our memories with Deirdre,” Wall wrote. “It is a picture of all of my KPMM moms surrounding me after they came to see me play M’Lynn in ‘Steel Magnolias.’ ”

“This morning we prayed together as a sisterhood and while the why’s are plaguing us, we are choosing to lift each other up and focus our prayers on comfort, peace, and healing. I keep hearing Deirdre’s laugh. It’s my go-to right now. I choose to hear her joy ringing in my ears. We promise you, Deirdre, we won’t stop laughing. It just might take some time before it can truly happen.”

In an interview, Wall said she often told a mutual friend, “ ‘I just wish I could be more like Deirdre.’ She was so unapologetically herself. She just had this way about her.. . . She was full of humor and sarcasm, and I just keep hearing her laugh.”

She recalled Zaccardi as “an incredible advocate for her children and for the school district” who was active in School Committee issues and parent-teacher groups.

“If you needed something, she wouldn’t even bat an eyelash,” Wall said. “She would be there in a heartbeat.”

Wall, a mother of two sets of twins, said she often turned to Zaccardi for advice because her twins were older.

“I really looked up to her in that way,” Wall said.

A memorial at the crime scene has swelled to include a number of flower bouquets and stuffed animals, according to footage that WCVB-TV tweeted Wednesday. A handwritten note left at the memorial says, “I love the family. I’m going to miss you guys forever. I will never forget you guys.”

On Wednesday, a number of people responded to Wall’s Facebook post, including one woman who wrote, “I‘m struggling today with the Why’s but I won’t anymore. I will focus on her holding my babies and all the babies of KPMM that she loved on as her own.”