A town continued to grasp for answers this week after a family of five was found dead in their Abington condo Monday.

Here’s a look at what is known about the tragedy that authorities have described as “unimaginable.”

A couple and their three young children were found dead from gunshot wounds in their townhouse on Centre Avenue on Monday.

A relative who came by to take the children to school called 911 around 7:30 a.m. after finding a body downstairs, Plymouth District Attorney Timothy J. Cruz said. Police found four other bodies elsewhere in the home.

In a news conference Monday, Cruz initially declined to say whether the deaths were a murder-suicide but described the shootings as an isolated incident. The couple had no known history of “any ongoing domestic issues,” he said. 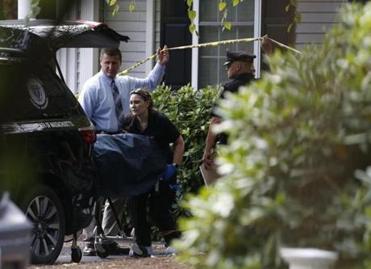 A couple and their three young children were found dead from gunshot wounds in their townhouse Monday in what authorities described as a horrific tragedy that left grief-stricken relatives searching for answers.

Investigators expected to find a gun somewhere in the home, officials said Monday; Cruz declined to say whether either parent was a licensed gun owner.

Investigators haven’t commented on a possible motive for the murder-suicide.

The investigation is ongoing, and authorities had no further information Wednesday.

Who the victims were

The DA’s office identified those dead as members of the Zaccardi family: Deirdre, 40; Joseph, 43; and their three children — 11-year-old Alexis and 9-year-old twins, Nathaniel and Kathryn.

“Deirdre was a lovely person — a trusted employee and valued friend to all of us at EMI,” Edlund said. “We will miss her greatly.”

Edlund said Deirdre had started out as the company’s receptionist before becoming the office manager, managing everything from bookkeeping to onboarding every new employee.

Zaccardi’s “welcoming smile, constant enthusiasm, sense of humor, and talent for organizing just about anything made her indispensable to the company, and to me personally,” Edlund said.

“Her deep commitment to her children, and the pride she took in their accomplishments, small and large, were part of many conversations. Just last week, she took Wednesday off for the twins’ birthday celebration. We are all shocked and saddened by this tragedy,” Edlund said.

In a phone interview with the Globe on Wednesday, Sarah Gregonis Wall of Whitman — who was in a support group for mothers of twins called Keeping Pace with Multiple Miracles — said she often told a mutual friend, “ ‘I just wish I could be more like Deirdre.’ She was so unapologetically herself. She just had this way about her. . . . She was full of humor and sarcasm, and I just keep hearing her laugh.”

It was, Wall said, “a very contagious laugh,” and she also described Zaccardi as “an incredible advocate for her children and for the school district,” adding that Zaccardi was actively involved in School Committee issues and parent-teacher groups.

“If you needed something, she wouldn’t even bat an eyelash,” Wall said. “She would be there in a heartbeat.”

Joseph Zaccardi had written on social media that he was the author of multiple children’s books.

Meanwhile, the three children attended Abington Public Schools, Superintendent Peter Schafer said in a note to parents Monday. Two of the children were enrolled at the Woodsdale School.

“This morning we were informed of the unexpected and unexplainably tragic loss of the Zaccardi family,” Schafer wrote. “Their presence touched so many lives and there are no words to express the sadness we feel.”

How the community is reacting

After news of the incident circulated, family members of the victims said that “our family has suffered an unfathomable loss” and asked for privacy “as we grieve our tremendous losses in private.”

Across the street, a neighbor said she didn’t know the victims but was stunned that anyone was capable of such brutality.

On Tuesday, a number of the town’s residents wore “Abington green” in honor of the victims, and posted green ribbons to social media.

“Remember to wear your Abington green today in memory of the Abington family who lost their lives,” wrote Alex Hagerty, a member of town Board of Health, in a Facebook post Tuesday, ending his message with a green heart and the hashtag #AbingtonStrong.

Meanwhile, others started a makeshift memorial near the family’s home, with flowers, pumpkins, and stuffed animals.

Selectman Kevin DiMarzio wrote on Facebook that the town has been “left with a hole in its heart.”

“When an event as devastating as today unfolds, it is up to us to help bring strength to the ones who need it most,” DiMarzio wrote.

The Abington Fire Department extended “its deepest condolences” to everyone affected, adding: “Abington is an amazingly strong community & know you’ll support each other in a way like no other in the days ahead.”

“It’s a tragedy all the way around,” Abington Police Chief David G. Majenski said Monday. “It’s just a horrific event that nobody should ever see.”

At the Woodsdale School in Abington, where two of the Zaccardi children had been enrolled, staff had planned to discuss the tragedy Tuesday with students, principal Jonathan Hawes said in a letter to families.

Hawes wrote that on Tuesday, the school’s plan was to “acknowledge that there was a death of two of our students and to recognize the immense sadness surrounding this event.”

He said students would speak with staff members in classroom meetings and in small groups if needed.

“We will validate any and all feelings that may be elicited and we will reinforce the message that they are safe here at school and that there is no danger,” he wrote, adding that discussions would be conducted “with sensitivity and age-appropriate responses.”

Much is still unknown about the incident, including the big question: Why?

Authorities haven’t divulged much as of early Wednesday night, but Cruz did note Monday that “when something like this, unimaginable like this happens, there’s always going to be more questions than there are going to be answers.”